Community
Article contest
Global Macro Trading
2014, for the most part, has been an interesting albeit quiet year for the FX markets. G10 volatility is the lowest in the post Bretton Woods era. However, while some Global macro firms are struggling, in actual fact, its been a perfect year to trade upon these ideas. 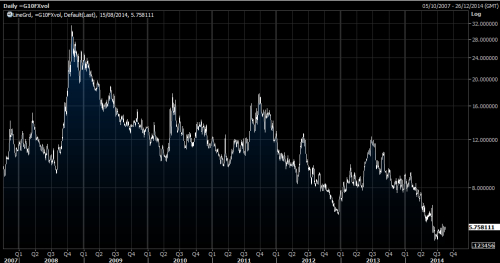 So what is Global macro? - Simply, its looking at the fundamentals of a country or area, and trading based upon the findings. Whether its in the Equity markets, the fixed income world or even in FX. Fundamental analysis is the cornerstone of investing, as has been as long as trading has existed.

Global macro is really considered a strategy, alongside the likes of Equity Long/short, Event drive, Arbitrage, Volatility... So far, this year Macro funds have performed very poorly, averaging -2.83% across the major Hedge funds. In FX, the key determinant of a currencies value is how central banks act, and their policy. Whether they are hawkish or dovish impacts both the supply and demand for currencies , and simple economics. So far this year, there has been substantial divergences in central bank policy. And if we can correctly predict *where* they are going from here, then trading in FX becomes really simple.

If we consider simply, the performance so far Year-to-date of the G10 currencies, we can see below, that currencies where the 2yr interest rates has fallen (x-axis) links fairly closely with the returns of the currency YTD (y-axis)

We can see that, apart from the AUD and the JPY, broadly speaking, the currencies have followed closely to what the interest rates have done. This is really the key to global macro trading, understanding what impacts the interest rates.

For example, we see a lot of fundamental data coming across the wires almost every day, and sometimes the market moves, sometimes it doesn't. This is because of the importance to the central bank with regard to setting interest rates.

Hence why inflation is incredibly key, also unemployment et cetera. Where as, indicators such as retail sales or industrial production, while important, are certainly not going to be a huge factor in determining interest rates.

If we chart the strength/weakness of an economy vs the change in market interest rates we see a really strong relationship.

Here we have the Citigroup economic surprise index for the US (blue) vs the Quarterly change in US 5 year interest rates.

We can see that when there are downward surprises to economic data, US yields fall. And Vice versa.

So it is important to follow the important data releases so that we can gauge the strength/weakness of an economy, and from that we can determine where each central bank lay 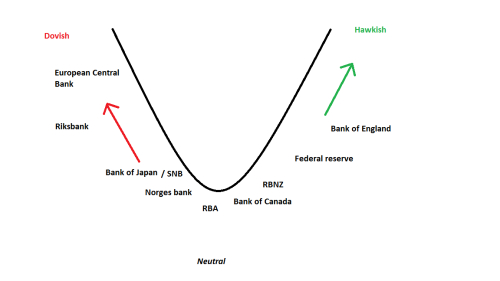 European Central Bank : Very Dovish : Current market pricings would suggest that the next move in the interest rate comes in July of 2017! Courtesy of my friends over at Morgan Stanley... We see that while the US is getting closer to a hike, the ECB is getting further away day-by-day

Federal Reserve : Mildly Hawkish : As seen above we are growing closer to hikes every day, but still about a year away.

Bank of England : Moderately Hawkish : a strong UK economy, and plummeting unemployment rate puts pressure on the BoE to hike rates in Q1 '15

RBNZ : neutral : After just hiking rates 100bps, the RBNZ have stated they are going to pause for a while as they assess the impact of the hikes

BoC : Neutral : Inflation ticking higher, is opposed by relatively weak labour force and growth figures, so next move is likely a hike, but years away still

RBA : neutral : end of a mining boom, China slowing, yet still strong. A so-so economy, next move likely a hike, but not until mid 2015 at the earliest

Norges Bank : Neutral : growing inflation, but concerns over some of the consumption parts of the economy would suggest the Norges banks are unlikely to do anything for a while.

Bank of Japan : moderately dovish : Further easing is likely as the economy is faltering, even though inflation has risen.

SNB : dovish : They won't be moving rates as they are focused on maintaining a weak currency. Hence will hike after the ECB

Riksbank : very dovish : deflation... little more to say, huge concern and the riksbank won't be hiking for a long time.


Building up a view like that helps us assess where the currencies are likely to move over the medium to long term. This is the essence of global macro trading in FX, as successfully figuring out where the central banks are going will almost certainly result in profitable trades given the incredible causation between interest rates and exchange rates.

So far this year, its been fairly simple to predict where the interest rates have gone... but for the rest of the year, the million dollar question is will it continue to be simple. Or will upside surprises in global inflation, Geopolitical risks or other black swan events cause unexpected moves?

Thanks for reading, and I hope this helps get a foundation level understanding on how to invest with a global macro mindset