Community
Article contest
Fundamental Point
FUNDAMENTAL MOVEMENT , RULES SHORT VIEV
As i see many traders have a little troubled too read when forex market does not move according to purely technical rules , when is fundamental movement activated.
So i decided to bring this fundamental principles , and will try to shed light on the time and period that can be expected.
Briefly and succinctly as possible clearly show these issues using simple words too evryone , even beginner would be able catch point .
Fundamental rules give us - they say , are designed - such a way that the value of money is closley correlated with supply and demand of the currency - a simple an explanation saying value of money fall when we have it a lot on market economy and they not are invested , in inverse proportion when little or not enough on market .
For example when market of country has large amounts free money or extra pumped (print-QE)
value of this currency will fall and thing will be analogous to inflation , vice versa when money a little available in market and know they invested - value should be grow up.
Based on example of last period , reprint us dolars - we hear form many sides call them cheap cash , loses its value through cos not generated be industry of country .
Personally , i think was it very good way to stimulate economy , taking into account the amount and ratio of growth population .
Namely , a fundamental analysis of market help us too predict longer range of time - a month , 3 month , half year , year - it allow us to determine in wich direction will be price currency move and what will be dull grow of this movement. Easy y can based on factor conditions potential data change .
Technical analysis has predict specified , while smaller range of time - daily , weekly - we be able too predict move based on support/resistance levels .
Choosing a recent example , attempts to break GBPUSD technical down trend from 19october been clearly based on fundamental rules - UK economy as we know it is not so much loosening extent of its monetary policy as the USA as so in the near term we can expect more such movements , as well the EURUSD i think that here resolved theoretical issues of spain we should see move inspired by fundamental rules .[sorry for me english 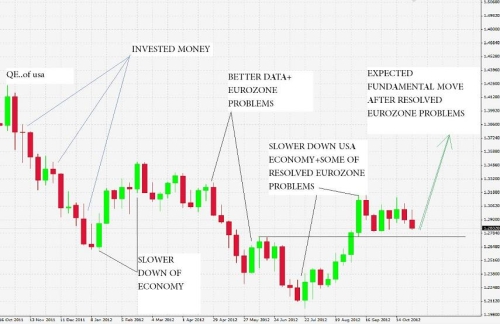