Community
Article contest
Forex Weekly Outlook - what about the Yen after Boj?
As I have announced in my previous article, I’m still expecting very interesting and surprising developments in the coming months and actually it has been happening in May, but certainly this is not the end of excitement in the forex. In the series of articles titled “Forex Weekly Outlook” will continue to provide my opinion to readers together with detailed information analyzes and forecasts for the currency pairs that they are asking for. Of course, I want to encourage readers to any suggestions, questions or requests to write in the commentary box. Based on the suggestions from Dukascopy community members, this week I will analyze the USDJPY and I expect the biggest volatility in this pair. I want to introduce a novelty – a new subtitle, which will go from now on every week and will represent a review of the last week in which I will try to remind you about the most important events of the last week.

Review of the last week

After several days of weakening dollar, Tuesday was a U-turn day. In almost all USD currency pairs daily candle was inverse hammer or a hammer. Investor’s concerns are that the currency with negative interest rates strengthened against the dollar so that is why they were at the main support or resistance. Despite several dovish FOMC statement from the Fed recently, the attitude towards the future path of interest rates in the US is certainly to the hike and this has not changed. Excessive strengthening of the currency, with negative interest rates and holding of such currencies in its portfolio has led to two risks: the first relates to the swap paid by holding due to stronger currency and other risks is that the potential ability to change the trend of a weakening dollar to strengthen become a great and further investment in currencies such as the EUR, CHF and JPY was no longer tempting investment. It is this fear has led to the fact that on Tuesday the dollar bounced and made daily basis for the bullish candle.

After a somewhat surprising decision BOJ to hold its monetary policy on hold, USDJPY had a great fall. The main thing that we can notice in all decisions of central banks is expectations. Since the market expected Bank of Japan to react – and that did not happen, investors hurried up to buy the yen; however, what we need to know is that the BOJ continued with their aggressive simulative monetary policy. Despite some mixed data in the US, the US economy is working stable, although there are certain risks due to election year in the US. Certainly in the next few weeks we'll find out in which direction will the central banks of the two countries would continue its monetary policy to investors in the currency to be clearer and in which direction USDJPY will continue and that there will be reactivated risk off the fear of some new crisis which would certainly have pressure on USDJPY which in this case could soon visit the 100. Investors will now certainly wait for the next BOJ meeting where they will, after such market reactions to their latest decision, definitely think twice whether to bet on monetary policy hold or to move with even greater stimulus.

On weekly chart we see that the USDJPY came close to weekly moving average around 30 pips but failed to touch, declined from the strong and crucial support from 105.50, after which it made a bounce. The range of 105-106.65 represents a very strong support and this is a place where investors have placed their bids. Support from which occurred bounce from horizontal line that connects the high of the December 2013 and bottom out in October 2014. Another support on the weekly chart 200 moving average is at 105.20 ( Chart 1). 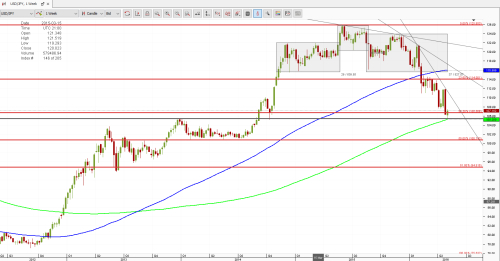 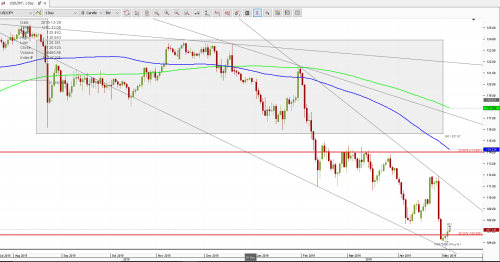 On the hourly chart we see primarily the creation of head and shoulders, which will be confirmed if the price goes through 107.50, after all the previously mentioned resistance vases as possible to stop the uptrend ( Chart 3). 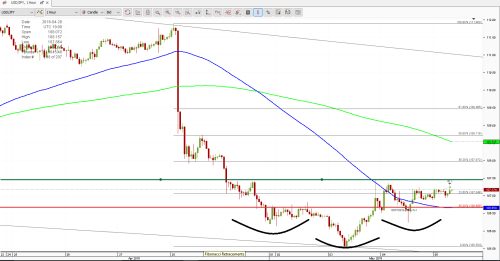 First of all I think we have the key support at levels ranging from 105 to 106.50 especially after the bounce buyers popped up with their bids, if that level is reached again, it will be good for entrance with stop loss at 104.90. My take profit would be at 109.45. Also a break of the level 107.5 gives bullish signal and has the potential of a good trade. On the sell side penetration of the 105 level will trigger some stops so I could see 100 level tested soon. My general opinion is that the USDJPY touched bottom and that by the end of the year it continue to appreciate.
Translate to English Show original Toggle Dropdown