Last week began with a low-volatility due to the bank holiday in the UK and Memorial Day in the US. On the first day of trading we had data on inflation in Germany, which were in line with forecast and were 0.3%. The same day, but in later times, Japan has demonstrated its unemployment data which were steady at 3.2 which is not much change market.

The first excitement came after the article in Bloomberg that Abe prime minister has made a decision on the delay tax rise, to hit the yen and the yen reached a bottom after that during the last few weeks under all currency pairs. However turnover occurred after confirming the news when became the official, Japanese yen did not fall on the first notice that after a few hours strongly strengthened against the dollar from the 110.70 to 109.

On Tuesday we had confirmation that inflation in the Eurozone was at the expected level in the amount of 0.8%, which is just above last month for 0.1%. GDP in Canada was weaker than expected and the news affected the fall of Canadian dollar despite rising oil prices, which in the last week trading for the first time this year was above $ 50 per barrel. Ends week brought the excitement, ECB decision on rates and press conference of Mario Draghi were, according to some analysts bullish for the euro because the goods Draghi raised expectations in the growth of the economy and inflation, however, this market is not confirmed because euro came under new pressures and recorded a new drop in relation to the dollar, but has found support at 1.1150 on Thursday.

Day after the ECB is perhaps the most important event in the whole month that changed the trend in many currency pairs and that one of these dollar currencies, namely the US NFP data for last month, went out on Friday and expectations were at 165K, however, reading was only 38K which is exerted strong pressure on the dollar, which is on almost all majors fell from 150-200 pips.

As mentioned in the review of last week eurusd had a very turbulent last week, which is likely to determine the future trend. As to the next event set aside targeted LTRO, which should come out on Monday and Eurozone GDP that comes out a day later. However, key Events will probably be announced two speaks of heads of central banks ECB and Fed. Mario Draghi and Janet Yellen who normally valid for a very dovish central bankers will deliver a message on further trends in the design of monetary policy.

Mario Draghi, according to many analysts with a very dovish look crossed to the quietly dovish outlook which could significantly affect the growth of the euro in the coming months. On the other hand Yellen is challenged for the first rate hike this year in June and after disappointing data from the last NFP any delay of rate hike will lead to new pressure on the US dollar.

On the weekly chart we see two channels that were formed after the introduction of QE and negative interest rates in the euro area. Price of eurusd is currently located in the lower chanel after the first breakthrough in the 4 quarter of last year. In the lower chanel eurusd is 8 months but the second time pair tested the lower trendline. The last test was last week, after which the price is refused due to weak NFP. Formation of Moving Average is in the downtrend, MA 100 is in decline and is below the MA200, which is also on the decline and the price is below both MA. 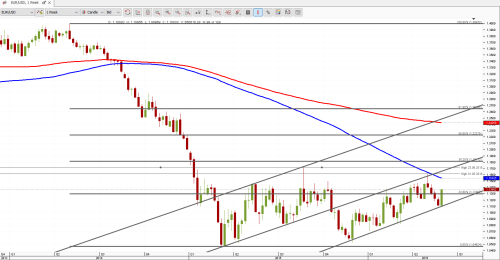 On the daily chart formations Moving Average is reversed price is above both MA and MA100 increases and is greater than MA200 which also changed direction from the drop in growing. Based on these two charts we can find supports and resistance. 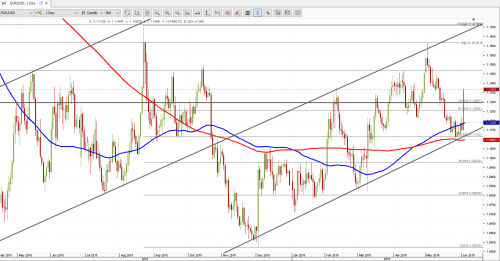 How does the fundamental picture in eurusd was little changed from clear bearish view, eurusd in my opinion has in the range, because on the side supports and resistance we have the key and we will have a clearer picture of the movement if this pair break some of the key supports or resistance which I mentioned above in technical analysis. My trading strategy will be that on key support buy eurusd and on resistance sell.
Translate to English Show original Toggle Dropdown