Community
Article contest
Fibonacci Analysis - Decoding the Secret Invisible Price Grid
Just think...
What if there really was a secret to trading? A secret code that every market abided by, in every time frame from 5 seconds to 5 years? What if the same analysis could be used to identify a short 1 minute swing in the EUR/USD and to identify the next major global financial meltdown, like the one that started in 2007? I suggest that there may well be...and that it comes from a complex set of mathematical laws that have been studied by ancient mathematicians for thousands of years, and have governed the universe for millions of years. I'm talking about Fibonacci Analysis. Not just your simple Fibo retracement, something much more complicated...and much more accurate.

In 1170, nearly 1000 years ago, a child was born in Pisa, Italy. He grew up to be one of the most important mathematicians of all time. His name: Leonardo Fibonacci. He is famed for his research into what is now known as the Fibonacci sequence: a sequence of numbers where each number is derived by adding together the two numbers proceeding it, for example:

Fibonacci studied this sequence in detail, and discovered that within it lay fascinating truths. From the sequence, dividing a number by the number that comes after it gives the number 0.618. This ratio between one number and the next may be the most important mathematical discovery of all time. It connects all things, from the spiral of a strand of your DNA to the astrological structure of the galaxy.

Fibonacci in the Financial Markets
In this article, I'll use the EUR/USD currency pair 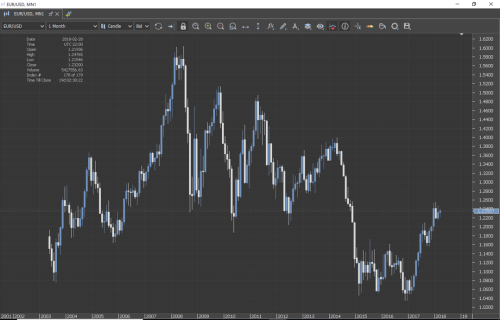 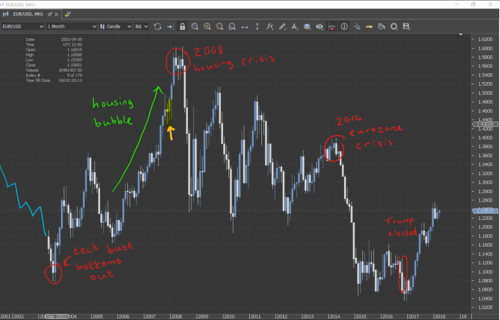 You can see early in the chart when the Euro bottoms out after the technology bubble burst in the early 2000s. Then the great housing bubble brings the value up high until 2008 when it crashed.

Below is an example of a simple Fibonacci Retracement. We can identify point A and Point B as clear points of significance because they are points where the market reversed from one trend to the opposite for an extended period of time. We can divide that range between point A and point B into the key ratios derived from the Fibonacci sequence (0.618, 0.382, 0.23). It's clear that the market respected the 0.618 (the most important) level because two candles closed on the level exactly, before the market reversed into an 11 month downswing. This is important, because a trader could have made profit on the downtrend that followed after point C if they recognised that it was an important level. 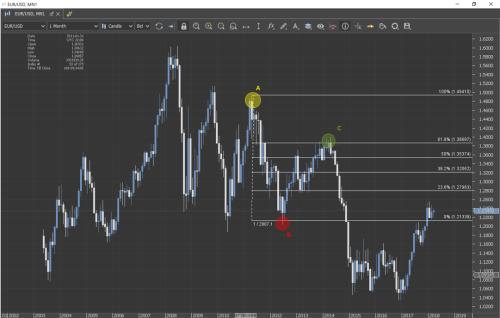 So that's how a basic Fibo retracement works, but we can dig deeper. I want to show you in more detail the importance of the housing crisis of 2008. I find this period interesting because it was a time of mass panic: banks were losing billions, governments were bailing them out, people were losing jobs and traders were selling everything for a loss. It seems like a period that should have no structure, it should just show panic and randomness. At first glance it does. But if you dig deeper, you find that the market movement is not even close to random; in fact, the whole crash could have been foretold by looking at the charts 10 years before it happened! 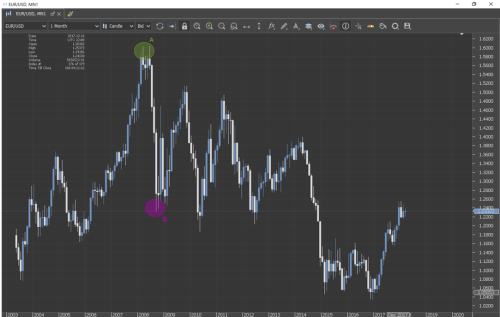 This is the range we're using. From point A, where the bubble burst, to point B, where the market finally bottomed out. 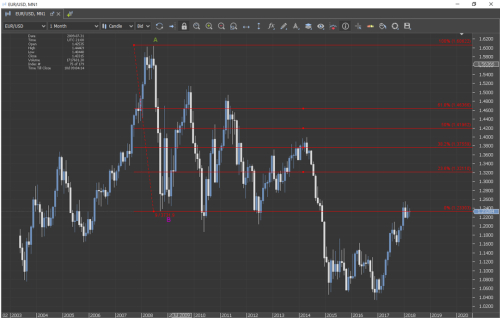 When we divide this range up into the Fibonacci levels, they don't seem to reveal much. The levels don't seem to match with many points of significance. But if you take the range between the 0.618 level and the market high and further divide that into the ratios (as shown below in green subdivisions) 2 important levels map exactly onto 2 major turning points in the Euro. This confirms this is a part of the invisible price grid - all of the levels we've identified do mean something, although it's not immediately obvious. 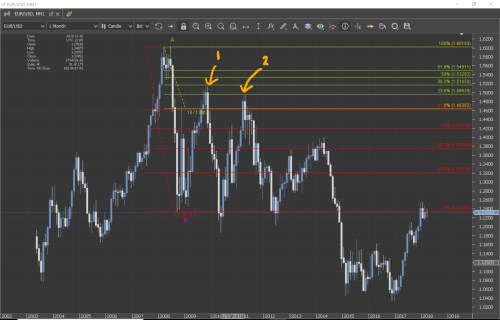 Now what gets interesting, is when we take the original range we divided, between point A and point B, we can take another range and divide that up as well. Here (below) I've taken the range from point B up to the next market high after that. Of the 2 sets of levels, 2 of them overlap almost perfectly. This shows that this level is of even more importance that the others. 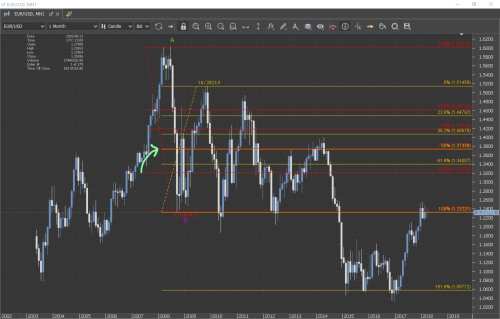 I've removed all other lines to reduce congestion, leaving a price level marking the level we just uncovered as an extremely important one. We call it a confluence zone. Let's label it x. Interestingly, it doesn't appear to be an important level at all. The market rarely bounces from it. In fact, without using the Fibonacci tools, you'd probably never know this level exists! 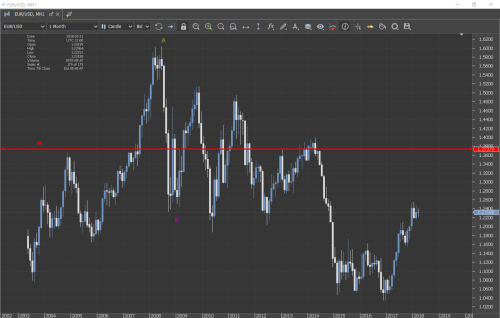 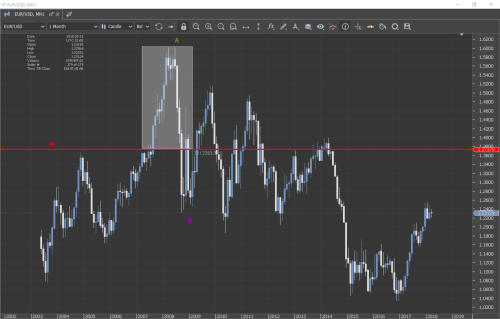 It's obvious that the level above m is important because of the turn around at point A, so now let's look at the level below m. We can find this level by cloning the box, and projecting it downwards from m , seeing where it ends. I drew a dotted white line to show the level uncovered by this box. The market clearly responded to this level when it found strong support/resistance shown by the green arrows. 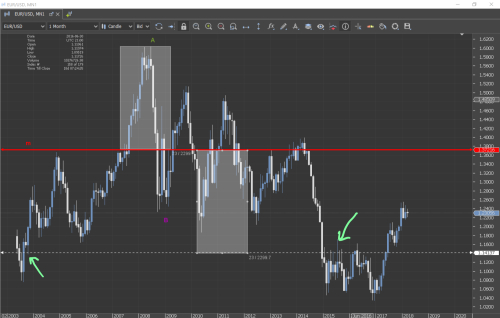 Taking this a step further, we can now divide this new box into the Fibonacci ratios, as shown below. Finally it becomes clear that we have identified a very important set of levels. The market respects these levels many times (some of them highlighted in green). It's interesting to remember that every one of these levels was derived from just that first range from 2008-2009 between point A and point B. You may notice that there were times when the market bounced from our levels before 2008, before the crash that allowed us to find these levels! How could that have happen? Well, the invisible price grids are present in every single market, in every single time frame. The market works from level to level, using each one like scaffolding. The levels go back in time over decades, and forwards into the future. That's why today, as I write this, the EUR/USD is bouncing from one of the levels we just uncovered, that all came from a huge financial crisis that started over 10 years ago.

All of the answers are there. You just have to know how to look for them.
Translate to English Show original Toggle Dropdown