My daily analysis starts with looking the charts and drawing major support and resistance lines, Fibonacci, few indicators including moving average, stochastic and linear regression. I do like to check the technical that I see with Daily Technical Analyses that publicly given on major websites. I found that just merely looking the technical does not help but working with them and picking them and comparing it with previous and next day technical points and drawing conclusion out of it is crucial. Just same as normal business requires a labor, forex requires same even more. I try to look the majors, GOLD and Indexes and its moves. I do also look the news during Asian, European and North American sessions. Even checking all this still makes mistakes. One of recent mistake, I did was just merely believed the news around EURO, which were reporting that Euro face pressure, Spain problems, UK weak industrial outputs etc. I did not know or consider that all these news were already had been taken account by big institutions and priced and when news came it had only discounting effects. In result, my trades were not successful but big lesson learnt that it is far more important to get daily sentiment whether knowing that today is prevailing risk aversion or risk appetite. The following chart 1 describes one of daily observations. 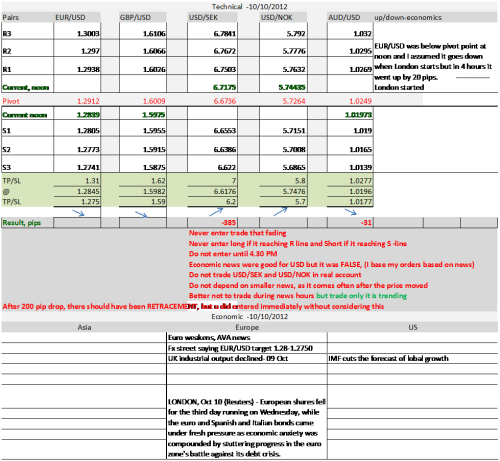 I made 20 trades on EUR/USD and were profitable on 7 and 13 were unprofitable. Average pips in losing trade were -28 pips and average wining trade pips were 15 pips. Total plus pips were -365 and + were 105. I were wrong far more than half of the time and lost nearly three times as much as on wining trades on this pair. You can see from the chart 1 and 2 that AUS/USD was only compensator for this month for my case.

The track record for the volatile USD/NOK and USD/SEK pair was even worse. I was right in average for USD/SEK but in terms of total negative pips on USD/SEK was awful. In overall, I lost money in all currencies I selected except AUS/USD gain that I had fewer trades. Lesson learnt on this is to concentrate fewer well planned trades brings profit but to make more trade with less knowledge drains the equity. I will never do the live trading on USD/SEK and USD/NOK. I did not find any reason or news why SEK and NOK were moved such sudden big moves during my trades.

CHART 2 Average profit and loss per trade in pips 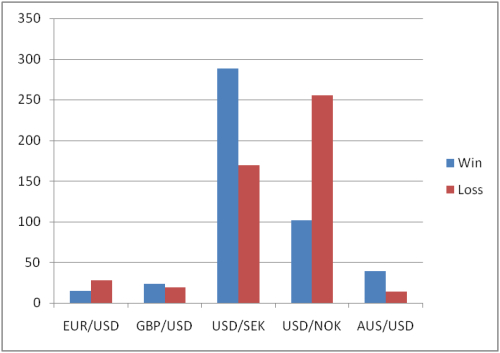 Countless trading books advise traders to do this. When your trade goes against you, close it out. Take the small loss and then try again. I tried this concept. Take example of GBP/USD. Number of trade made was 20 and out of 12 were trade that I cut the losses early and 8 were profitable trades. Cumulative small number of losses counted a -231 compare to 190 pips that so called profit run pips (the average pips in winning trade were 23 vs -19.5 average losing trades). Perhaps, I could have allowed to run more the + pips but last week there was not that big move happened on this. Cut loss early has worked me well to add losses. I think a better way of trading is not to enter a trade when it is not taken any clear direction. Patience to wait the right entry could be solution for not having many wrong entries and cutting them early. I know it is very challenging if someone wait the granted entry despite the fact that there is no suitable 100 percent profit guaranteed entry. What I mean here, I will be using the high probability entries only in the future to eliminate the low probability ones.

CHART 3 Total profit and loss per trade in pips 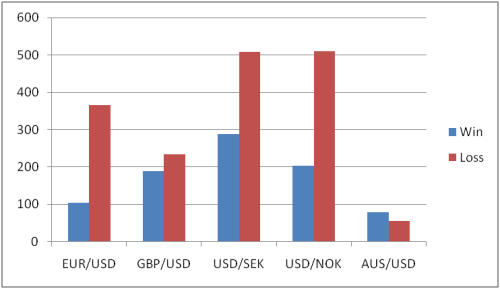 I found that when more leverage is used then more emotional force added into the trade and produce more sweet and tension in mind. In this case profit run concept has no operation but instead will start seeking to close the trade sooner as get some gain appears. In reverse, what happens if price go in other direction than what you expected and seeing that you start losing, then false hope operates in mind, whispering you that it has gone up so many pips or it dropped suddenly and it will at least have retracement and you will get recovered etc etc.. and sometimes this hope continues until equity drained out. Of course more mature traders won’t do this mistake but those of us who has not prepared emotionally, more often has this kind of sickness.

The way to avoid from this fit fall is do not use excessive leverage and always keep in mind that forex is a marathon not 100 m short run. The scheme below illustrates how I blown out several accounts. Example, I started with 2000 USD and setting a target to gain 50% at the end of month. I did achieve this target several times just within first ten days of the month and starts thinking to do more but what happened, remaining week often blown out. Why is it so? This is firstly due to excessive leverage use and poor money management secondly, emotionally not prepared to wait right momentum, just hurried and made pointless orders believing what you gained before. These mistakes becomes clear when I start analyzing my trades and having a diary notes. The arrows one way, show ht equity and other way is the emotions Chart 4.

In my next article, I will explain how I do consider entries that identified over 80 percent probability to have winning trade.