Community
Article contest
5 Elements for Market Analysis
In today's article I decided to tell you about the 5 key elements of market analysis on which I rely in finding entry points.Here you need to understand the signals that are not based on the laws of supply and demand, resulting in a high probability lead to disastrous results. The market is constantly changing. Those graphic model or scheme to a variety of indicators that worked yesterday may not work tomorrow.It remains unchanged, only one - is that market movements are formed due to the opening / closing positions, and they in turn affect the volume.Therefore, trading decisions should be taken only on the basis of supply and demand analysis. Then objective information will be the basis of transactions.The volume shows the mood of the market, the number of contracts that someone bought, while others sold. It is important to understand that the more contracts came into the market, the higher the interest of major players to a certain level. And interest in the level - it is the building block that can be used to build a good trading system, which has a logical basis.I use as a rebound from the system level and the breakdown and pulse circuits. Each of these systems is based on the volume analysis. And each of these systems has its own conditions for opening positions.These conditions - this is the analysis of the key elements that allow to enter into a transaction with a higher probability of a positive outcome.So you have an idea of ​​what I say, I sign for the key elements of the analysis for the circuit rebound from the level.

The best places for a set of positions by large players - this is a period of consolidation. Professionals know at what points will be many who want to buy, and in what - sell. Manipulating formed in the range, they are forced most traders to open trading positions in the most inappropriate places (eg, breakdown when leaving the range).
If professionals are interested in buying, they will specifically generate false move down. These movements majority of small traders that will sell.
After some time, when all the market supply will not be satisfied and willing to open short positions, inertia market will begin to grow, because as the market moves up traders who previously sold formed consolidation will close their short positions with losses.
Consider the example of EURUSD, taking as a basis of the volumes have traded on Euro future. We see that the March was a "trend month" and after NonFarm EUR get into Consolidation phase. All last week shook out buyers who tried to take the price up, and stopped the sellers, who considered that the time has come to fall. The result of all this was the accumulation of a large volume - see red chart on the left. 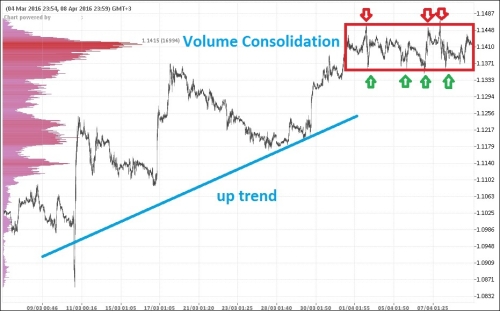 So that it formed a new trend. It is created by the traders who open up their position at the wrong time and after a while they close the stop-loss, acting as aggressive buyers or sellers.
Therefore, in order to open a position in the right direction, it is necessary to understand in what phase are we where on the key volume instruments are traded. After all, if the market is above the recent accumulation, it will grow until it has a significant volume. Market turns almost never occur without volume.
Determination of the trend - it is an essential element of market analysis. And I always try to open the position only when know on which side the superiority of forces, and which side is most advantageous to join.

2. ANALYSIS OF CONTEXT
However, one trend is insufficient. To make a secure transaction is necessary to determine the most appropriate area for the buy / sell.
It plays an important role of handling multiple timeframes. The total analysis time frames gives a deeper understanding of the current situation, because we begin to analyze the different in volume accumulation duration. This allows you to better understand the action of various groups of traders: the long-term and short-term.
For example, if the entry point to buy intraday formed at the bottom of the weekly storage volume, the transaction will have a good potential and support the long-term players, because at the moment it will be an attractive area for buying.

3. Support / resistance levels
In schemes rebound from the level is also very important to wait for the correction movement in the framework of an established trend.
Firstly, there is the potential for movement. Secondly, the transaction will not open emotionally, we do not run into the passing train, and open positions, along with long-term players.
As significant levels may act prior accumulation volume, for example, the maximum amount of the last week, or the maximum amount of the previous day. These are the levels at which most transactions took place during this period of time. If yesterday or a week ago, this level is protected, but today the situation could be repeated.

4. PROTECTION LEVEL
Another key element of the analysis of the market - this is the level of protection.
The price can go, for example, the maximum volume of last week, but if at the same time there is no response on the level, do not pass any transaction, not stuffed volume, it says that in the moment not interested in the level of market participants. Accordingly, the price could easily break through this mark and continue the search for a fair price.
That is why within the day before the opening of the position I will wait for the accumulation volume. Local emissions suggests a possible stop. It is very important to monitor the response to the amount of the price. If immediately after the formation of a large volume of the market unfolds, it is very likely talking about restraining movement.

5.TIMING
Timing - is the most important element that many traders ignore.
You have to understand that the market is cyclical. We often carry out the same actions in the same time.
News often come at the same time, the exchange work on schedule, the maximum trading activity can be traced only in certain market periods. Even within the pulse movement of the day, usually formed from a new hour. In general, the timing includes many aspects of trading, and all that I try to use in trade.
That is why it is very important to know and understand market cycles, to know when a high probability the market will be a lull, and when rapid movement; when within the context of profitable open position, and when to stand aside.
Translate to English Show original Toggle Dropdown