Community
Article contest
Eas Based on Indicators and what we Know about them
In my previous article several types of trading strategies were described that traders are able to code to make them fully automated. These types have evolved out of the most steady trading methods that showed relatively consistent positive results. In the period of time they brought in constant return but occasionally caused losses so that they could be named relatively profitable.

The first type of strategies has indicators as the main basis of their work. Indicators allow traders to determine the forthcoming movement of currency rate. Every indicator has some inherent logic – an algorithm reflected in its mathematical calculation. Usually this algorithm is a relation of several activities that could be derived from the price itself. The use of indicators simplifies the making of trading decisions, as frequent calculations for an algo-trader are inconvenient. But with the help of indicators he is able to find the most favorable time to enter and exit the market. There are various indicators and algo-trader even could invent his own one. As every indicator is calculated differently, their combination with optimized parameters in EA might be profitable.

Finding the working bunch of indicators is difficult as usually they lag while the price goes forward. Generally only indicators don't bring much return on interest though they are somehow interesting.

In this article we review the first type of strategies where use only indicators are used to open and close trades. Their main advantage is that they are simple to code. And here we are also looking at the systems based on candle patterns as these types are similar.

Here we are examining two systems. The main idea of the first one is more or less known by algo-traders. It is built upon the Commodity Channel Index and upon the Relative Strength Index indicators. Two conditions should be fulfilled to open trades: when the price is positioned on in the channel created by these indicators (RSI is less than 60 and more than 40 and CCI is less than 40 and more than -40) and CCI moves faster as compared to RSI – the program opens a trade. The “quickness” value of this movement can be adjusted. CCI indicator usually takes the lead over the RSI as it expresses the divergence of typical price from its moving average regarding to the average absolute divergence of this value. As to CCI RSI is based on theory of probability and means the number of positive changes of the price regarding to the number of negative changes counting on 100%. These indicators work good together and on the chart below we can see their performance. Williams Percent Range is used for closing of trades. This indicator shows if the market is overbought or oversold, so when the price hits upper or lower lines for buy or sell position, it closes the trade. These limit lines also can be adjusted. 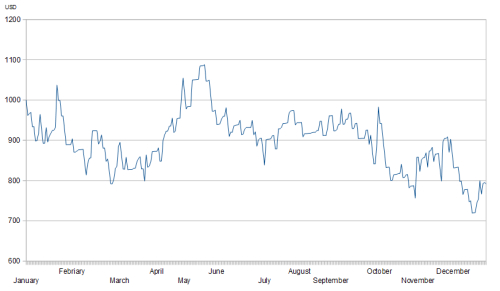 We see the graph that is not enviable though. The overall loss according to the results of 2014 year, is USD 207.95. The trading account was funded by USD 1000, 299 deals were performed, the drawdown came to 35,21% and there were 3 consecutive losses. Despite these poor results something could be done here, so this information is useful. To say truly, it's difficult to get results better than these using indicators only. One should use some skilful filters or make more precise optimization, but as we got only 3 consecutive losses, so it is allowed to enable martingale option. On the H1 EURUSD chart we achieved more successful results that could be seen on the chart below. 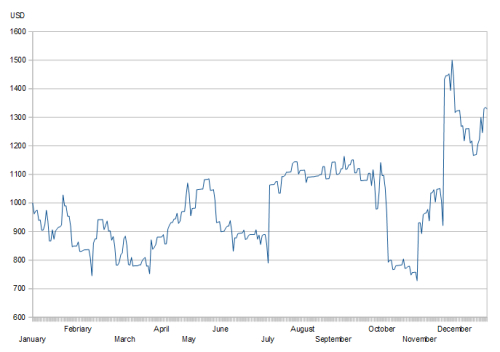 Martingale option increases a lot two times after every losing trade, that's why there are several abrupt movements of balance line on the chart. The results are: 32.9% of annual profit, 299 trades were performed and drawdown amounted to 41.2%. Such outcome is moderate and more adjustments, tests and optimization of the program can append consistency.

The next strategy which I'm describing in the article is based on candle patterns. What are the patterns? They are candle pictures that forestall a certain price movement. There are many patterns. The most well-known are: triangle, pennant, head and shoulders, combinations of Japan candles, figures of technical analysis etc. As indicators, patterns can considerably simplify the making of trading decisions, so they are used in the automated systems too.

So the strategy I'm telling about uses two types of patterns. The first is shooting star which defines the moment for long position opening and hammer which is used for short position opening. Shooting star represents three candles: two on each side and one in the middle – the little one which implies the swing of bearing price movement.

The pattern hammer means one candle which has a long tail and a main portion in the upper part of the candle. It resembles to a hammer and implies the swivel of bulling price movement. These patterns turned conversely can give reverse signals. They work quite well jointly. We can see their performance on the chart. 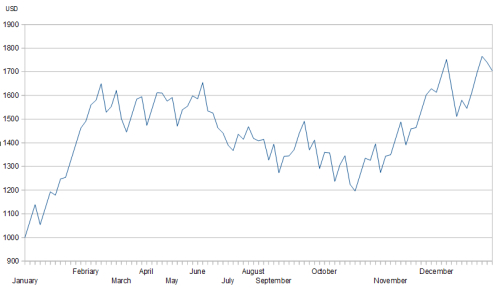 Traders know that if more than 60% of trades close in profit – such system is worth while. This system shows 60.87%, so this chart is more attractive in comparison with the first one. We see the drawdown of 31.6% that appears in June but comes to naught in the end of October. The system shows the annual profit of about 70.4%. 92 trades were performed and there were 6 consecutive losses so that we couldn't use martingale option here. This result is the best one so that this system could be used in real trading.

In this short article we briefly reviewed strategies based on indicators and candle patterns. Generally they might be profitable but lack consistency and possibilities to improvement. But they still can be used in trading as well as and their principles mixed with other types of automated systems.
Translate to English Show original Toggle Dropdown