In this article I would like to introduce you some of the most effective japanese cadlestick patterns which I trade successfully on live account. Purpose of such article is to present you very powerful and easy techniques for earning green pips without caring much about difficult strategies with many indicators, as often presented among traders. As I often say: "Less is more". I will show, that it isn't only plain, vague phrase behind such words. Also, my article wouldn't be complete without brief introduction to japanese candlestick basics. Let's start! Japanese candlestick charting technique was originally developed in "medieval" Japan by traders with rice, who used this tool to predict the future price of this commodity on rice market. That days rice was traded on specialized places for it, such as the Dojima Rice Exchange in Osaka. In such places in fact became history of modern future contracts trading, but that is another part of a story. 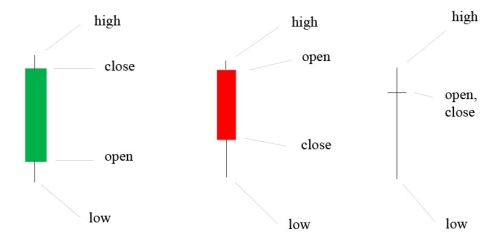 It is important to mention that according to Japanese, only real bodies are of higher importance and shadows are understood as price fluctuations. However, I don't agree with that explanation, as shadows often tell us significant things about volatility, S/R levels and different price levels which were rejected.

Japanese candlestick lines often form different patterns and those can be divided into 2 basic groups:

In my trading and in this example I will use only some of the reversal patterns, as they give us much larger potential for profit, especially these days. Also, some of my favourite reversal patterns are very easy to recognize and occur frequently.

"Shooting star" - probably my most favoured pattern which is often successful. It consists of long shadow and very small body. In official literature it is said, that colour of the body is not important, but I prefer it to be red, it is stronger signal. Also, I accept slight variations in lower area of candle, such as little shadow.

"Hammer" - in fact it is shooting star occuring in downtrend, simply inverted, strong signal to buy. Contrary to official literature, I only prefer hammers to be blue or green colour, simply - bullish.

"Engulfing patterns" - multiple patterns, either bullish or bearish, consisting of one candle with small real body followed by candle with large body, engulfing the previous candle in opposite direction. It is major reversal signal. They don't occur so often as stars and hammers, however, they are of high importance. 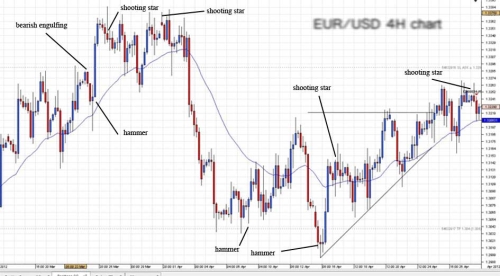 How to trade these patterns:

That was some brief introduction to candlesticks and how I trade them. You can see, it's that easy. Try similar approach and you will be nicely surprised by reward - pips and also time spared.