Community
Article contest
Don't Think of 1.20
Men are mistaken in thinking themselves free; their opinion is made up of consciousness of their own actions, and ignorance of the causes by which they are condicioned. Their idea of freedom, therefore, is simply their ignorance of any cause of their actions

Spinoza
What is the price?

The price is a glass jar full of pennies. The question is if you can guess how many pennies contains, because that is what worth. Seems easy, right? However, this is the kind of problems that, as pick up James Surowiecki in his book Wisdom of Crowds, the group does better than the individual. As operators, we tend to overestimate or underestimate the exact amount of pennies the jar containing. In contrast, the average result of all individual estimates provides a result that is surprisingly close to reality. In fact, this number is the reality in Forex.

The game does not have any tricks: all the individuals watch the same jar, all the individuals share the same information; as it would occur in an ideal market situation in that no operator would take advantage of their access to insider information. In a zero-sum game means that, agree the model of economic rationality, no player would have a competitive advantage that allows him to stand out from the rest. But, as revealed by behavioral economics there is a factor able to distinguish one other operator: managing and interpreting information.

All agents are conscious of the effects of news on money supply, inflation level, interest rate etc. have on currency. It does not require any effort to determine whether it will be having a positive or a negative effect on the price. However, it is impossible to adjust how the actual effect is on the quantitative level: how many pips it will move. You know: some individuals tend to overestimate, underestimate others. But why?

What will be the EURUSD exchange rate? Remember not to think about 1.20, because if you did you will have begun to grope from that number. This is perfectly rational, you need a reference value (anchor) from which adjust (hence the importance of historical cost). However, the starting point influences your valuation and therefore your decision. What is surprising, as Kahneman and Amos showed in his famous paper "Judgment under Uncertainty: Heuristics and biases", is that a number randomly chosen, unrelated to price, exert influence that help to overestimate or underestimate your valuation. So, in the anchor effect is also involved primining: a manipulation of response based on previous stimulus latent in implicit memory.

Since you lack insider information, your only chance to stand out from the other traders is to interpret the information in a way more realistic than them. One way to achieve this is becoming aware of the cognitive biases that affect your valuation and, therefore, the decision you are about to make. For this, you need to incorporate those concepts to the theory in which you are observing the market.

Imagine the chart as a perfect sine wave (with the inclination you want between +60º and -60º ). The curve is structured by a symmetry axis that represents the point of equilibrium between ask and bid. The traditional theory interprets the deviation of this axis as the victory of one party in the endless battle between bulls and bears. But what happen if we interpret such deviations as a series of successive periods of overestimates and underestimates? 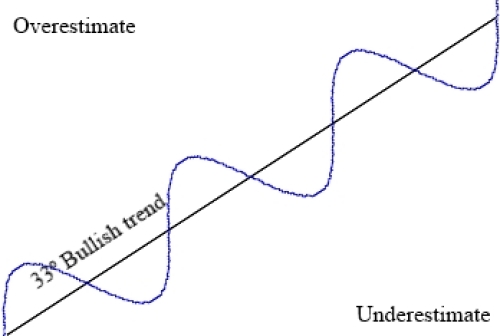 Think about the strong price movement occurred during Draghi’s conference. Dis his words contribute to overestimate the value of currency? And, what happens when those words disappear from memory? Then it comes to an expected correction: the agents enters in the market without any influence by Draghi’s words.

Now, try to define support, resistance and accumulation area based on this article: they are anchors and double zeros that exert psychological influence. And how are other chart patterns defined? Double bottom, head and shoulders, triangles, harmonic patterns…

But.. What is the price?

What I have not told you is that in the experiment of James Surowiecki each individual ignore the response of the rest. That is, the average is established from a series of statistically independent events. However, this does not happen in Forex. In Forex we have a feedback loop. When there is a correlation between individuals decisions, there is too a systematic confirmation bias that hinders that the aggregation of new assessments reduces the error prevails.

If the first level thinking is to discount your assessment bias, the second level involves adding bias to the decision of the mass of traders. The objective is to take advantage of the prevalence of bias that will move the price to "unrealistic" levels from which ensure a comfortable entry. As stated in the stock market: a share always returns to its fundamental value. This is true for any other market: the price is what the individual is willing to pay; for example, an individual can pay 500 USD for a pen, but the fundamental value of the goods is the one we have got minus the subjective value of it. The average sale price of one million pens will always be closer to the objective value than a small sample value.