When most traders hear the words diversify, they think of adding more instruments to their portfolio, more and different stocks, bonds from different countries etc. But diversification goes a lot further then this and can take on many forms. Ever thought about adding bitcoin or other non-traditional financial instruments? How about trading a losing system? Even that can make you money in the long run. In this article we’ll go over just some of the ways you can diversify and the benefits of this process.

Let’s start with the lower hanging fruit first. If you have a profitable trading system, test it on other forex pairs. If the system is solid, it will work similarly on other currencies as well. Let’s take a look at a simple trend following system in the Euro. The picture below shows the daily EUR/USD chart with applied 50 and 200 period simple moving averages. The 50 SMA is in red, while the 200 SMA is blue.

When the 50 SMA closes below the 200 SMA, this is called the ‘Death Cross’’. It’s generally considered a bearish trading signal, meaning more losses are likely to follow. The Euro gave out this signal in the summer of last year at 1.3603. If we held all the way to the opposite cross, we would’ve made a fantastic profit of 2,394 pips.

While the USD/JPY rallied, the EUR/USD gave several false whipsaw signals in 2013, leading to losses. Trading both pairs at the same time would not only make us more money in the long run, but also lead to less drawdown and a smoother equity curve. When one pair losses money, the others makes it back and then some.

Another side benefit of adding more pairs is increasing your number of trades. Profitable trading is a numbers game. If your system has a proven and backtested edge, you want to trade it as often as possible. The system’s performance will get closer to your expected performance the longer a system runs.

It’s advised to use common sense when picking which forex pairs to trade. For example trend following system will perform poorly on highly correlated currencies like the Pound and the Euro, or the Aussie and the Kiwi. So trading the EUR/GBP and the AUD/NZD with a trend following strategy will likely lose money in the long run.

Don’t be afraid to try out different markets, there’s a lot more to finance then just currencies. For example equities in the U.S. enjoyed a fantastic bull run for this past 7 years. Futures on the other hand experienced a major decline in prices, led primarily by Oil falling over 60 percent last year. The chart below shows last year’s plunge in Oil prices.

Trend following systems like the simple SMA cross we shared above have historically performed well in futures, not so much in stocks, so always backtest your strategy to make sure it works in your chosen market!

3. Think Outside the Box!

When picking your trading instruments, think outside the box! The less people trade a particular financial instrument, the less competition for you. Even heard of bitcoin? The Golden Cross happened on February 9th 2012 when bitcoin was trading at $5.83. Soon after the entry we experienced a large negative move against us of $1.95 dollars, or close to 33 percent. Bitcoin was highly volatile in the past and even though it has calmed down a bit this year, it’s still substantially more volatile then traditional financial instruments. But if you trade small, you can use this volatility to your advantage. 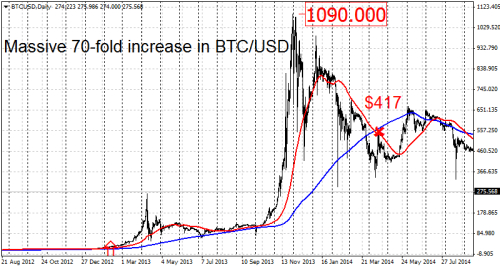 On the chart above we can see that even though prices dipped against us, we didn’t get an exit signal. Eventually the price of bitcoin recovered and by June of that year we crossed the $6 dollars mark. By the end of 2012 BTC/USD was trading at $13.51, almost $8 dollars above our entry. In late 2013 we got yet another strong move higher, with prices peaking at a fantastic $1,090 dollars in November 2013. Note that at this stage we’re still in our initial trade, entered back in February 2012.

Eventually the bitcoin bubble burst and prices retraced heavily. We got our exit signal at the opposite cross on April 11th, when bitcoin was trading at $417 dollars. Even though we ‘’lost’’ a ton of open unrealised profit, this exit would’ve still netted us a fantastic gain of over 70 times our initial entry at $5.83.

This is another diversification that is seldom done by traders. The usual modus operandi is to pick the timeframe that works best and focus on that. But a better approach that may ultimately yield to a smoother equity curve is to mix different timeframes in there.

The chart above shows the EUR/USD with the same 50/200 SMA cross as above, this time on the weekly instead of the daily chart. From the start of 2003 to the exit signal in August of 2009, the Euro enjoyed a massive rally from 1.0419 to 1.4171, a total of 3,752 pips.
Another side benefit of keeping this long trade for six long years would be that during this time the Euro had a higher interest rate, you would get paid every day just for holding the position.

No I haven’t gone crazy J Did you know that sometimes including a low performing or even a losing system can actually add to your bottom line? Let’s demonstrate this with an example.

The daily chart above shows the EUR/USD during the summer of 2013. Note that the pair stayed basically flat during this time period, generating three false signals in a row. This happens often during summer with trend following systems on forex pairs. Can we improve this performance?

How about if we add a range-bound system or two? In one of my previous articles I shared two very simple systems for the EUR/USD. One was a Stochastic System while the other used Bollinger Bands. They tend to work well during summer, as evidenced in that article. The two systems generated strong returns, with 4 winners and 3 losers and a cumulative gain of 328 pips during the summer of 2013.

But this is all we need. When they underperform it’s usually because we have nice trends in the market. These trends will get picked up by our other trend following strategies. You end up with a smoother equity curve, lower drawdown and more consistent returns all year round. If you’re a professional trader and have to pay the bills every month, consistent returns matter a lot.

Say you manage to lower your drawdown from 20 percent to 10 percent. Then you use this lower drawdown to up your trading size slightly by 1.5 or even 2 times. You now make more money then before, with a lower risk profile.
Translate to English Show original Toggle Dropdown