It‘s not difficult to draw every possible line in the chart and explain that price was rejected at, or broke that line in the past. However, when trading real-time, determining which level will be hit first becomes challenging. The most confusing thing is the number of levels. When closely analyzing intraday charts, a trader can find levels every ten pips or so and, of course, not all levels are equally important.

What is more interesting is that many of them could be divided by their purpose – not importance. Some of the levels are meant to hold and reverse the price and others to provide momentum for further movement. These levels are called “Triggers”. Different Price Action behaviour aspects around support / resistance (S/R) and trigger levels help to improve profitability and to choose entry and exit points more wisely.

The delicate differences between Support / Resistance and Triggers

Due to the gravity factor, Support and Resistance more often act in the form of zones and rarely in the form of a single line. Therefore in the real life charts, S/R levels often are breached by one to a few pips before reversal. Sometimes price also reverses just before an S/R level and this makes it difficult to trade them.

The thing is that those smaller planets/levels often have a different purpose than the bigger ones. That purpose is to “check” reliability of current movement by stopping it for a moment or by accelerating it to the nearest stronger S/R level. That makes them triggers. Distance/zone around S/R levels is one of the separating characters, because triggers have a very tiny zone or none at all – just a single line, which if touched, accelerates price to move further.

Sometimes when price moves with strong momentum, it crosses one or even a few triggers in one run/wave and even on smallest time frames it shows very little reaction to them. That is the point actually - showing great opportunity to enter or to add to existing positions in the direction of price movement at the very beginning of the momentum change. Because of a broken trigger, this movement gathers more momentum – powerful enough to reach the nearest S/R (often S/R is an edge of the current range or range of the day, week, etc.) or even break it without any notable retraces. Without retraces, it would not give an opportunity to enter early if the trigger factor is ignored.

Probably it is worth mentioning at this point, that demand and supply (D/S) zones are relatively different from S/R‘s and, generally, they mean wider zone of interest and may include quite volatile consolidation (from intraday perspective) inside them. 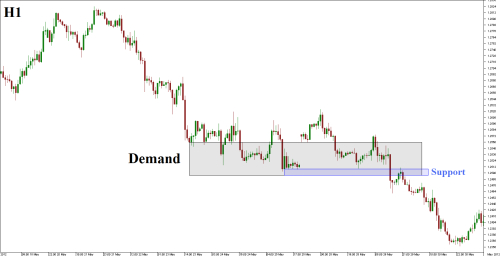 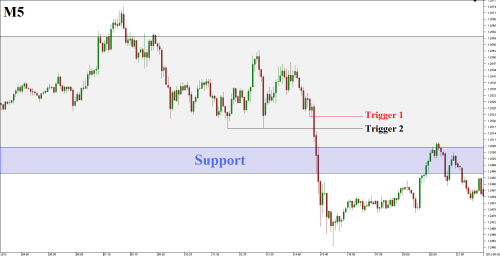 become pivotal as they coincided with former (broken) support and opening level of the day. Because price did not reversed after first rejections – first break inevitably led for a test (and break with momentum) of lows.

So, what exactly defines a trigger? Generally it is a week S/R which is inside the range, but not all intermediate S/R levels act as triggers! There are several additional aspects which define the difference.

When price breaches a trigger, that usually means that price is going to test the nearest S/R level immediately with the greatest probability as can be in trading. This assurance gives a hint to determine chronological order in which next levels will be hit.

On the other hand, breach of an S/R level means that price may go further eventually, but not necessarily within the same wave or preferred time period. For example; after broken S/R just by a few pips, price may come back in to the range and could retrace/bounce as far as 99% inside the range (let‘s say – to make a double top/bottom) and this move still would be considered within the trend. That is another separating characteristic.

When price approaches the trigger line and gets rejected, it rarely becomes a reversal. More often, after rejection, price consolidates near the trigger level and breaches it eventually. When rejection of S/R levels lead to reversal, price starts to move inside the range again.

Trigger lines are most often found on intraday basis – inside average daily range, but these are in large time frames too. It is just harder to identify them as momentum in price action of bigger time frames (D1 and higher) is interrupted by changing trading sessions, weekends and holidays.

Other characteristics of the trigger line: 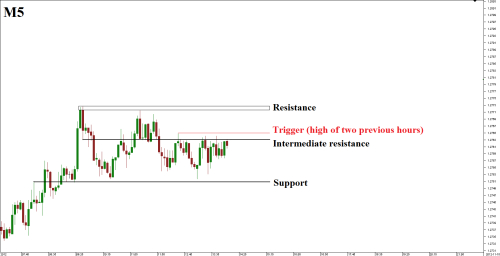 2.0. One of the most common situations: micro consolidation at intermediate resistance – 50% of newly formed range, previous high (high of two hours of consolidation) act as a trigger. 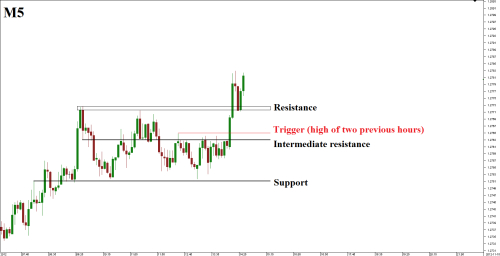 2.1. Within first pip above the trigger line, price blasts with strong momentum.

The less number of times a certain S/R was tested before, the better, and The strongest levels actually are ones that have never been proven as S/R previously! It may sound controversial, but there is a strong logic behind it.

Once tested, a level becomes visible and because of this, clusters of limit orders emerges around the level: stop loss orders of sellers and entry buy orders of those who anticipating a break out. These clusters weaken imbalance of supply and demand. In other words, they help to create equilibrium at the level where most of the participants expect the opposite; Imbalance in supply and demand with reversing price as an outcome of this imbalance.
Naturally the question rises – how does one find S/R levels that have never been tested? They are calculated. The simplest approach is 200% percent extension of the range – meaning, that the actual range of the present (or of the past) will prove to be only 50 % of the future range. There could be more complex mathematics applied but the principle is really simple; Price will go both ways eventually. Price always looks for equilibrium and that is way 50% is so powerful, because the equilibrium is at the middle between supply and demand – it’s the universal law of nature.
Look at Facebook’s IPO. This newly born instrument never had a history except the opening price at 38 $. So if considering opening price as the middle of future range, and current low (almost perfectly at 25 % between opening price and zero) 19 $ as support, ultimately - future target (and resistance) will be at 57 $. And around the middle – 38 $, after it will be tested from both sides, price action will create triggers.
Translate to English Show original Toggle Dropdown