Community
Article contest
Current Market Movement in an Unexpected Direction
1.0 "Paradoxical" trends
The string of bad data from China and a drop in oil prices returned gold from safe investment harbor in uncertain times.
After three years of losses, gold has strengthened since the beginning of the year more than eight percent, becoming the best the investment in this year globally. An ounce of gold last week reached a price of 1,155.30 US dollars, the highest level since 29 October, and analysts believe that the best is yet to come.

Since the developments on the financial markets by buying and selling their causes people who are by nature emotional and often irrational, the value of all financial instruments has always exaggerated rise or fall.

With the advent of the financial crisis and much greater interference of states and central banks in the developments in the stock markets, there was a new phase of the irrationality of financial markets and the seemingly paradoxical situation. Suddenly, the good news construed as bad, and bad news as good. At any news about the correction of the economic situation in the US, stocks around the world began to fall sharply as investors felt that the growing likelihood of termination massive injection of money into the financial system by the central bank of the US. In the case of news about the worsening economic situation, stocks began to rise sharply as investors believed that the central bank will continue to inject money into the financial system, and will sooner or later lead to higher revenues of companies, which will justify the growth in stock prices.

The last few weeks again happen "paradoxical" trends in many markets. In the currency market, the US dollar weakens, even though the US economy is in a much better condition than other developed economies. On the other side stronger euro, even though the eurozone is still in serious trouble, and the European Central Bank announced that there is a real possibility that at the next meeting of governors bring ruled on additional monetary easing as traditionally bad influence on the currency. The Japanese central bank has recently, for the first time in history, and totally unexpected, interest rates dropped below zero, which means that it is now offering savings in yen even lower than it was. But even that decision did not prevent a significant strengthening of the yen in the last two weeks.

I on the gold market is also seemingly unusual event shifts. One of the main reasons for the growth of gold prices, the growth rate of inflation in the major economies in the world. In recent months, decisions and announcements of the three largest and most important central banks in the world (US, European and Japanese) indicate that the rate of inflation is much lower than expected, but the price of gold in a month increased by 12%.

Investors in the oil market have also changed the way of thinking. In the past year have begun to completely ignore the war conflicts and political tensions in the Middle East, tensions between the West and Russia, and the mass cancellation of major energy projects, which could cause a shortage of oil in the near future and continue to sell oil only on the basis of current stockpiles can significantly reduce overnight.

Will Great Britain left European Union ? This "Brexit", as people call, can lead to a weaker GBP currency So let we see economic data in last few days :

As we can see, this weekend price action was unexpected. In Friday, we got few nice newspapers titles about EU and England relationship and nice chances that England will stay in EU. During weekend Boris Johnson (London Mayor) said that he could vote against Britain staying in the EU. This news made huge imapct on market. More than 100 pips price dropped in Sunday market open as we can see on Figure 3 - from 1.44 till 1.429.

During Monday and Tuesday GBPUSD started to go below several years low. 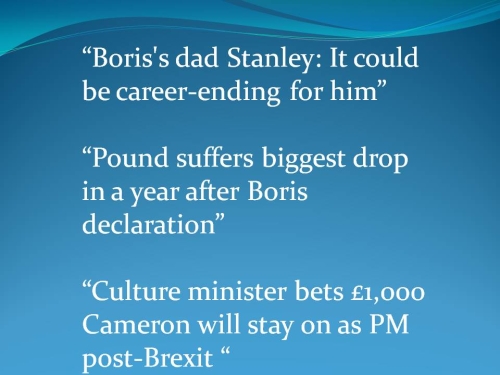 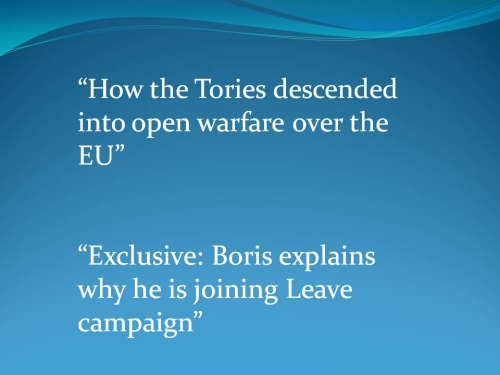 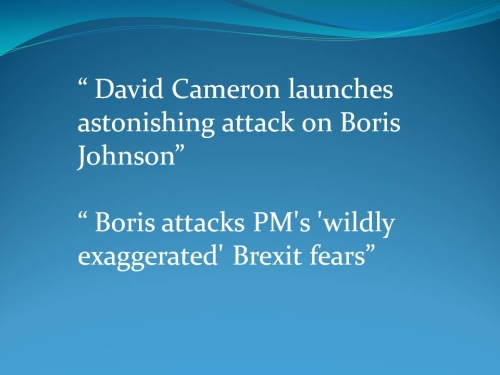 All this facts are pure politics and such big impact and volatility is not good for market in my opinion.

I believe that the current market trends, the temporary anomalies resulting from the excessive amount of money bet on the basis of unfulfilled expectations of continuing stable price movements of financial instruments in a particular direction. As soon as there has been little movement in an unexpected direction, there was panic and a mass closing position at the worse price than planned on the part of investors was forced to reduce the risk.
Translate to English Show original Toggle Dropdown