Whether we can be more inspire some another currency than Swissy franc this week? Whether prepare the new big currency war among SNB and the rest of the world? Whether we trade this extremely volatile currency like is CHF? And whether is CHF still the safe-haven currency? This is some questions which are about CHF and we still didn’t have clear answer.

On 6th September SNB is on their statement said that Swiss National Bank sets minimum exchange rate at CHF 1.20 per Euro.

What happened after that ?

Maybe I did not have more than 20 years experiences on the market but for my several years of trading on forex I did not seen jump like this above. More than 1.100 pips for less than one hour, because of one sentence from SNB.  Definitely this sentence, statement or action we can declare the event of the week or maybe entire month.

Sure that this the last remaining chance for SNB to prevent the further strengthening CHF which blight Switzerland economy. Ok, they managed EUR/CHF to climb above 1.20 and the whole day the pair is above 1.20, but whether the rest of the world remain silent on this action of SNB or will respond?

ECB has been informed of SNB decision on EUR/CHF rate and SNB took decision ,,under its own responsibility”. Apparently smooth response but what about behind closed doors stores ECB?

Everybody on the market think that Bank of Japan will be the next who will intervene on same way like Swiss National Bank.

If we know that the currency pair EUR/CHF can not break through the barrier of 1.20, will anyone go on the market short on these levels? I think NOT, my strategy is when the rate will be around 1.2020- 1.2050 I will go BUY. Why not? I can’t lose, behind me have strong support, and that support is SNB with unlimited amount. Do all traders does not think so?

What about the volatility CHF ? Surely it will not be as before. Now we have strong support on 1.20 but what is with resistance, whether some Central bank, hedge fond or retail traders set sell limit on 1.23-1.25 ? If they set and they probably will, then we have range on EUR/CHF 1.20-1.25 for long period.

And now, after this intervention can we still say that CHF is the safe-haven currency? Probably we can, because the CHF except fast and strong intervention , is not lost status safe-haven, but not yet. But now we have this situation, if we want to safe money on currency like CHF because safe-haven status, we will have almost negative interest rate and extremely high commissions, on other hand we have Euro with 1.50 % of interest rate and with fact that Euro can not weaken to CHF below 1.20 because behind our investment was Swiss National Bank as security.

From the above we can conclude that the SNB its power to give some currency safe-haven status, a large part redirected from CHF to Euro. 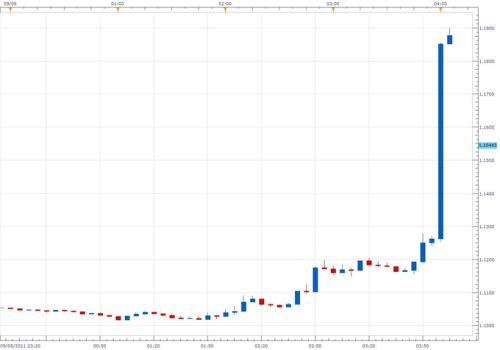