Community
Article contest
Another Look into Risk Management
In previous article series “Riding the Price action” I stressed that having right technical levels is not enough in order to successfully trade them. Risk-to-reward conditionality, dynamics of liquidity and money management comes to play. Risk and money management might sound boring and well over-escalated topic, but personally I found popular material about this topic all blurry, stereotypic and too formal.

Popularly accepted common approaches of sizing in/out of the total exposure in combination with entry and exit displacement, as risk and money management during the trade are left completely to subjectivity of a person’s choice to pick exact entry and exit points. And most importantly – additional entries after price travels notable distances after rejection/impulse point, generally are high risk in any context.

Actually one can google out more information about money/risk management in gambling context than in trading. If gamblers manage their way out with unfavorable odds, then with a proper technical analysis, trader should have some use out of these principles. Personally I use somewhat similar approach to D'Alembert’s betting system.

Let’s forget all the text-book risk management approaches for a moment and let me nail it all down to a several essential points, which I know are working and maybe – that’s all that trader needs to properly manage his risk.

It’s important to split market entry in to a few different orders. It gives a freedom to manage the trade without completely exiting. There will be always a moment of hesitation, when price will not behave as expected or just will not make in time to reach the target before the risk event of any kind (Central Bank statement release for example). When in doubt – better to book profit, at least partially. Even if profit is tiny, but equal or bigger to the risked amount initially (say – 20 pips), it makes a big difference in the long run.

Close small part of total exposure early! In times of micro consolidation (as often the case before a big move) it is frustrating to watch your trade surging in to a dozen pip profit, retracing back to breakeven point (or even risk limit of the position – stop loss) and bouncing back in to the “green” territory - over and over again many times. Until it becomes clear that scalping that range within same entry point and direction of original anticipation, just closing part of the position right at the moment of very first price hesitation point (or at a distance where risk-to-reward reaches 1:1 ratio) would make more profit than the whole trading scenario to begin with! (See figure 1.0.).

This principle of booking first small bounce, often within the boundaries of 10-20 pips (or at risk-to-reward 1:1 ratio) bounce, I consider one of the most underrated and most important aspect of risk and money management during the trade as it represents probably the most common behavioral indication of price action: whatever technicals used, if there are other market participants, who use same technicals, most likely - price will react to it one way or another, and the very first reaction is the strongest.

Size of an early exit is subjective. If it is a half of initial entry – it pays for initial risk and remaining half runs “for free”, if it’s a third of initial entry – it doesn’t cover all the risk, but increases a chance for bigger returns. If a trade situation have high probabilities (or if trader is confident enough about the level he is trading at) re-entries after partial exits might get bigger in order to accumulate exposure if price gives a chance to re-enter at minimum risk.

Figure 1.0. Quite often price consolidates in micro ranges for hours or days. One who manages to scalp such range at the same time maintaining positional trade will take the most of it.

No matter how perfect most of your entries are, probably, bad exits (when exiting with profit, but too late or too early) are much more common in the long run. It has a simple mathematical point – stop loss limits are much closer than profit targets and it becomes clear sooner – wrong or right the trade decision was, but until price reaches the profit target it takes a while and many things happens, often - without even reaching the anticipated target at all.

My alternative to a traditional scaling and averaging approaches is to pick one particular exit spot before projected target (could be a half way to the projected target), to close all or most of the total exposure and wait for a retracement, even a very small one. Just, to get bellow the exit point, preferably - by exact or bigger amount than was originally risked for initial entry point, with stop loss at the original risk limit of the first entry. If price reverses completely and stops out the trade, situation will end up with a little profit or breakeven outcome. Often, best spot to close the trade is right after new highs/lows of the range are created. (See Figure 2.0). 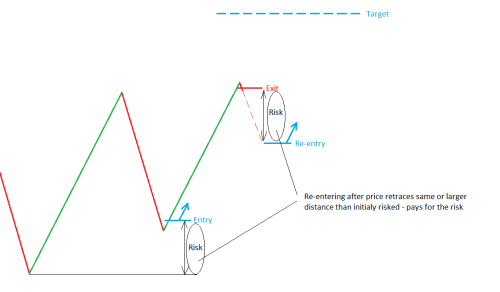 Figure 2.0. This type of re-entry eliminates risk and gives a chance to trade levels, where others would hesitate.

The most basic trading method with one entry and one exit at the final target is also – always an option, but as market price never goes in a straight line, often entering in to prolonged consolidation periods or violent corrections, such approach is more effective on very long term and low risk trading style, which is rarely the one, chosen by beginners or undercapitalized retail traders in general.

Disregarding the technical analysis one uses, if it really has any potential, such management principles should reveal it’s true potential for profitability.
Translate to English Show original Toggle Dropdown