Community
Article contest
Another EUR/CHF Analysis
Next week will be next SNB (Swiss National Bank) conference, thats why i think thats great time for another EUR/CHF analysis. This will be third, first i wrote at seventh march 2012 (and i was right) and second i wrote at twentieth semptember 2012 (right too). 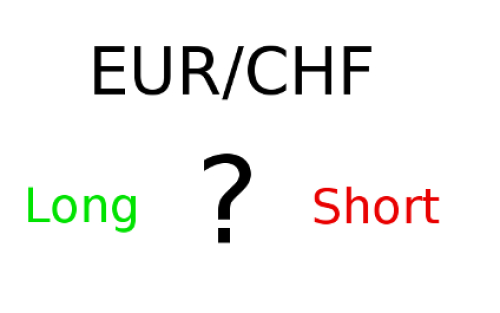 Im really big fan of SNB peg, because i think its great opportunity for everybody to make very good trades with wonderfull TP:SL ratio. Thanks to several several big banks, which started to apply negative interest rates at CHF deposits is EUR/CHF traded around 1.21. (was as high as 1.2163)
1) I think that SNB will not change their peg for another 3 - 6 months, because there is still big risk at forex market with EURO and USD too. So thats why i still belive in 1.2000 floor as great resistance, which will not be broken. I would set up Stop loss level in range 1.1970 - 1.1990 depends on your trading style. My plan is to open positions at 1.2090 and in case market will give me better price i will buy much more. In best case at 1.2010 with target at 1.24.
2) I would split my target into two cases, short term and medium term. My shortt erm target is previous highs somewhere around 1.2150 - 70 zone, because that zone was several times tested, so it will be important next week conference. Medium term target is around 1.23 - 1.24 levels, with low possibility of break 1.25. If the market would reach 1.2450+ zone i would prefer to sell, because SNB hold now really big quantity of assets, thanks its policy (more than 424 billions, which they diversify into another currencies like USD, AUD and JPY).
Conclusion:
There are two main reasons why i decided to buy big positions at EUR/CHF, first of all there is the peg, which is at right place with several testing and no fail. At second it is TP.SL ratio. I risk only one part and can gain 3 - 6 parts, depends on at which level i bought and what is my target. I read several analysis from big banks and found very interesting analysis from BNP paribas, which target is 1.25 in 3 months. Another great advantage is that by holding EUR/CHF longs you will receive nice swaps.
What is your EUR/CHF analysis?
Translate to English Show original Toggle Dropdown