The European Central bank (ECB) Governing Council meeting on the 8th of May 2014 made a decision to maintain the benchmark interest rate at 0.25% and the prevailing monetary policy regime. However in the question and answer segment the ECB president Mario Draghi said, “I would say that the Governing Council is comfortable with acting next time but first we want to see the staff projections” setting the markets alight. Following these remarks, the German 10-year bund yield, fell 2 basis points to 1.457%, the Stoxx Europe 600 index went from an intra-day low of 335.52 to a 0.4% gain at 337.59, Germany’s DAX 30 index climbed 0.4% to 9,556.88 and the EURUSD dropped from a daily high of 1.3990 to close the day at 1.3840. The stage is now set for an exciting June 5 2014 meeting.

This article seeks to critically analyze the state of the euro area economy and the tools available to the ECB to deal with the imminent challenges. 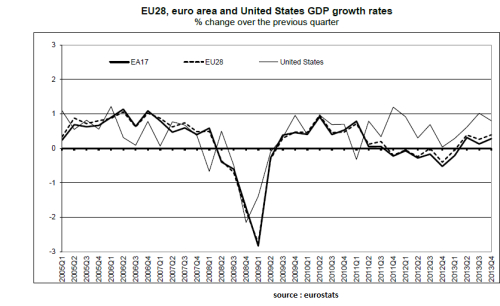 As is evident in the graph the growth rate in the euro area is lagging behind its peers and hasn’t actually picked up significantly over the three quarters. The growth rate is still vulnerable to shocks in the economy and if not monitored carefully the euro area might slip back into recession.

There is no doubt that the unemployment rate in the euro area is not health and has been ticking higher since 2011. A lot has to be done to create the necessary jobs and if this is not tamed it may spiral out of control.

Housing is an important economic indicator because as more people buy homes, the consumer sales go up. The House Price Index (HPI) describes the price developments of all residential properties purchased by households (flats, detached houses, terraced houses, etc.), both newly built and existing, independently of their final use and independently of their previous owners.

The base for the quarterly index is 100 and the index has been printing below the base figure from 2012. This is a sign of weakness in the housing sector as it may be reflective of decreasing demand for housing which may point to low inflation.

Another measure of housing is the construction production or output. Below is the year on year change in construction output in the euro area.

Construction output in the euro Area increased 6.70 percent in February of 2014 over the same month in the previous year registering its first consecutive gains since 2012. This is indicative of the weak state the housing sector in the euro area at the moment.

Euro Area recorded a government budget deficit equal to 3 percent of the country's GDP in 2013. The deficit has been gradually decreasing since 2009.

Standard and poor defines credit ratings as forward-looking opinions about credit risk. Standard & Poor’s credit ratings express the agency’s opinion about the ability and willingness of an issuer, such as a corporation or state or city government, to meet its financial obligations in full and on time. Below are the credit ratings of euro area countries from various agencies.


Inflation in the euro area

The ECB's objective is to have inflation rates of below, but close to, 2% over the medium term. Below is the graph of inflation trends in the euro area.

The inflation in the euro area has fallen considerably over the past few months. Since October 2010 the rate has been below 1% far behind the ECB target leaving the euro area at serious risk of deflation. The straight red line on the line graph to the left show how far off from the target the current inflation rate is and decreasing trend in inflation.

As is evident in the above statistics the euro area is facing a lot of risks. The growth is still fragile and there is a real threat of deflation. The ECB has got a number of tools that are at its disposal that they can employ to stabilize things in the euro area.

This is an unconventional monetary policy tool. A central bank implements quantitative easing by buying specified amounts of financial assets from commercial banks and other private institutions, thus raising the prices of those financial assets and lowering their yield, while simultaneously increasing the monetary base. This is a tool that the ECB can use this method to stimulate the economy addressing the GDP growth, employment and housing challenges. Quantitative easing can be used to help ensure that inflation does not fall below target.


Impact on the EURUSD exchange rate

The writing is on the wall, the ECB is going to be acting on monetary policy in June. Failure to act may spell more trouble for the euro area. It maybe a rate cut only or a rate cut and quantitative easing. Even if the ECB does not act in the ways anticipated above, certainly it will have to weaken the euro with a dovish tone. The EURUSD has been trading close to its 2 year high recently and this is not good for the inflation outlook. If there is a depreciation in the currency then imports become more expensive and exports are cheaper causing inflation to increase. This is because the price of imported goods will go up and cheaper exports increase demand for the local exports therefore leading to an increase in domestic aggregate demand. Also manufacturers who export see an improvement in competitiveness without any major changes, therefore employment increases and GDP growth also increases.

Herewith the outlook for the financial markets;

Lower yields in the long term bond price – There is a inverse relationship between interest rates and bond prices, meaning the lower the interest rate the higher the price. So a the prices increase the yield on the bonds decreases. The intervention of the ECB in the bond market through the quantitative easing program will result in higher bond prices and lower yields.

Higher stock prices – When interest rates fall, consumers and businesses will increase spending, causing stock prices to rise. On the other hand quantitative easing will improve the attractiveness of equities compared to bonds and this will also reduce the discount rate at which future earnings are discounted leading to higher equity prices.