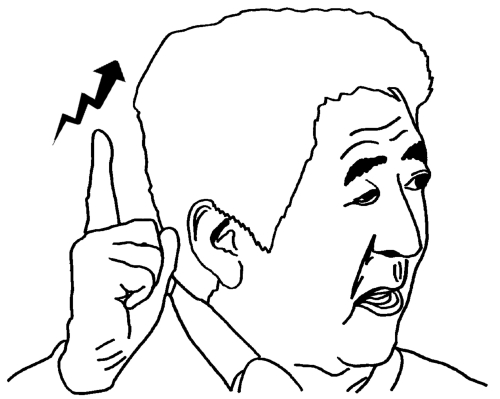 At a time when the world is facing a major financial disruption investors look for a safe haven for their money, and despite the economic backdrop the yen is seen as one of the safe havens, a place with little risk.

Paradoxically, the world's largest debtor nation, with negative interest rates and an ageing citizenry don't seem to gather the regular conditions for the country’s currency to spike, but that’s exactly what has been happening to the yen during this year.

Polls over the past year have shown that more than three quarters of the Japanese population have not benefited from Abenomics.

The economy is at a standstill, wages and household income are stagnant and deflationary pressures remains strong.

When it was first advertised, Abenomics filled the Japanese stakeholders with encouraging expectations over an economic rebound.

With too little changes in the economic situation, the current policy is gathering the acronym of the “welfare for the wealthy” - it only boosts Nikkei and Topix.

William Pesek [1] author of Japanization: What the World Can Learn from Japan’s Lost Decades (2015) stated by Jeff Kingston:

Abe’s catchy marketing campaign wowed a media establishment accustomed to predictable methods of reform and
half-hearted efforts to achieve them.

Abe brought the circus to town.

There’s only one arrow to Abenomics: monetary easing. Raising sales taxes sent arrow two into the ground long
ago. And if you really believe arrow three exists, I have a bridge in Brooklyn to sell you.
The BOJ purchases are more than 90% of newly issued government debt each month. The following chart shows how the Japanese Debt ownership is changing in recent years (source Bloomberg, available on [2]) 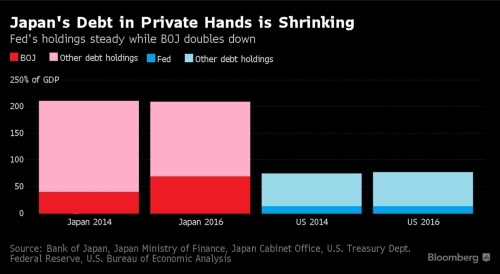 Prime Minister Abe and BOJ’s Governor Kuroda have few ammunition left to fight this massive yen hunt. With the quantitative easing exhausted and with a flopped negative interest rate strategy, there are not many policy tools left over.

Then a flopped negative interest rate strategy adopted on the 29th January 2016 sparked the yen’s strength, nearly from the 121.70 till the actual levels below 105, as shown in the following chart (USD/JPY one-week chart). 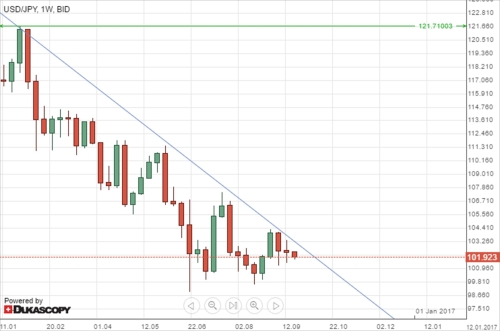 A currency intervention by Japan alone would be unlikely to have a substantial impact in the market. Besides persuading the U.S. to join in could be tough in the actual “Global Currency Arena”.

Paul Krugman [3] says the following in his article entitled Abenomics and the Single Arrow:

What I believe to be the real lesson of Abenomics so far is the limits of monetary policy. There were supposed to
be three arrows — monetary policy, fiscal expansion, and, yes, structural reform. But really only the monetary arrow
was fired.

So all the weight rested on unconventional monetary policy, which did succeed in depressing the yen and
pushing up stocks, but hasn’t been enough to generate a convincing boom or rise in inflation.

And that appears to not be enough, just as the ECB’s actions haven’t been enough without fiscal support. Never
mind the third arrow [structural reform]: what we need is the second [monetary easing].
On September the 21st the BOJ kept the interest rate at -0.10% and steeped into a bond-buying pace, coupled with 'yield curve control'. 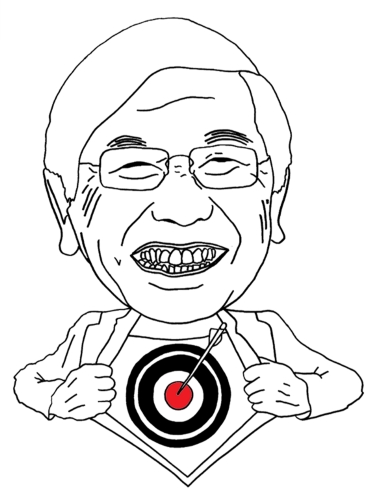 In reaction, the Japanese 10-year bond yield jumped above zero for the first time since March, with the benchmark rising to as high as plus 0.005%.

The Nikkei climbed more than 1.5% after the announcement and the yen fell.

The BOJ reassured that it will retain the quantitative easing until it hits its 2% inflation target.

Some analysts argue that the lack of consumption is one of the main reasons for the actual scenario of deflation in Japan. With the interest rates as low as -0.10%, retail investors aren’t achieving the returns that they’ve targeted for their savings. And instead of spending they keep saving their money or back their investment intentions.

Mr. Kuroda is always trying to surprise the market. Maybe settling the interest rate level back to 0.10% could reassure that the BOJ is not forcing lending, nor trying to harm the Japanese financial institutions, moving away from what Krugman named as “unconventional monetary policy”.

While there’s a massive capital injection on behalf of the BOJ, private Japanese Government Bond holders are watching their assets being burned due to negative or flat yields in longer maturities.

It is a paradox, that perhaps a way to weaken the yen would be committed with the BOJ raising the interest rate rather than through cutting it. If it happens it won’t be a conventional rise, it would be indeed a vote of confidence to fade out prospects of further deflationary pressures with an aim to propel consumption based on a higher yield for retail investors.