This article takes a look at some of the fundamental factors from Australia affecting the Australian dollar. Technical analysis of the AUDUSD is also performed.

In the monetary policy meeting by the Reserve Bank of Australia (RBA) on the 7th of July 2015, the central bank left the cash rate unchanged at a record low of 2%. Fig 1 below shows the interest rates in Australia.

In the statement, the policymakers were of the view that the monetary policy needed to be accommodative since the economy is likely to be operating with a degree of spare capacity. To this end the record lows interest rates will likely remain in place.

The Federal Reserve (Fed) is widely expected to start increasing its policy rate later this year, but some other major central banks are continuing to ease policy. Though the global financial conditions remain very accommodative, the USA seems to be heading toward a divergent path.

The Fed has held its benchmark federal-funds rate near zero since December 2008 to bolster the economy through the financial crisis, recession and uneven recovery and is now widely expected to pull the plug off. During her appearance before the Senate Banking Committee and the House Financial Services Committee, the Fed governor alluded to the fact that she preferred to proceed with the tightening of monetary policy in a prudent and gradual manner, which has increased the probability of a September rate hike. 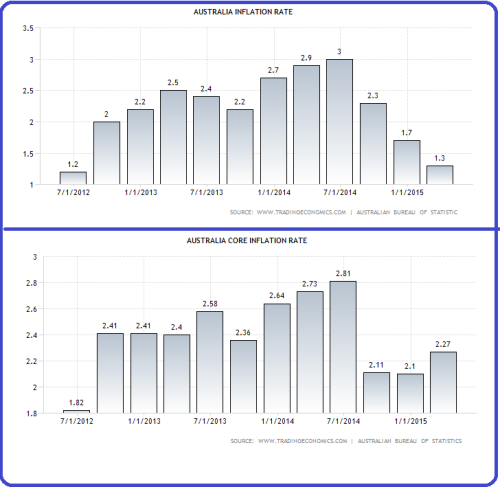 Consumer prices in Australia rose 1.3% in the first quarter of 2015 from 1.7% in the previous period. This was the slowest annual pace since the second quarter of 2012, mainly due to a further decline in cost of transport, communication and clothing and footwear. Core inflation, which excludes some volatile price items was 2.27% in the same period. Since the core inflation remains above 2%, there may be reasonable confidence that inflation will revert to the monetary policy target of an inflation rate of 2–3% on average, over the cycle in the medium term.

The Australian economy is forecast to be the 13th largest in the world in 2015, despite the fact the country is home to only 0.3 per cent of the world’s population. Australia’s nominal GDP is estimated at US$1.5 trillion and accounts for 2% of the global economy. Australia has more than doubled the value of its total production from a decade ago. Fig 3 below shows the quarter on quarter growth rates of GDP in Australia. 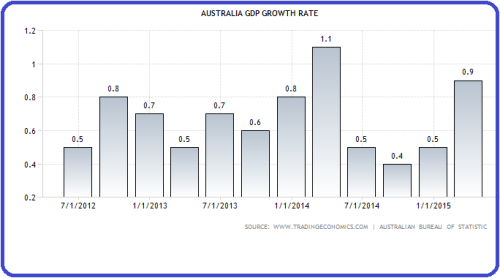 As shown in Fig 3 the GDP grew by 0.9% in the first quarter of 2015. The main contributors to the increase in GDP growth were mining (+0.3%) and financial and insurance services (+0.2%), with construction coming up with a negative contribution of -0.1%. 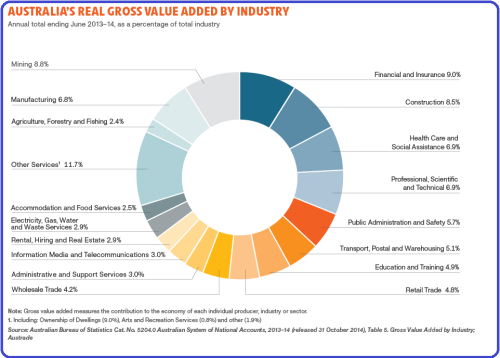 As shown in fig 4 above mining contributes about 9% of the GDP. Australia’s abundant resources and proximity to Asia underpin its position as a major global exporter of minerals and energy resources and products. Australia has the world’s largest share of iron ore, uranium, gold, zinc and nickel reserves and more than 85% of the exports are destined for Asian countries including China, Japan and South Korea as shown in fig 5 below. 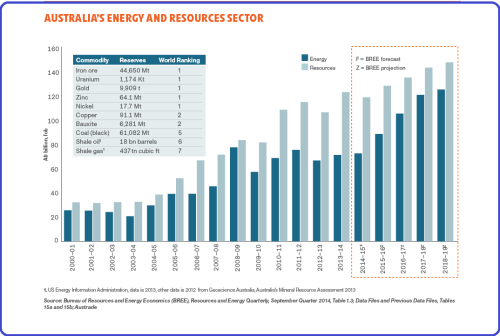 The commodity prices have been on a free-fall since late 2013. As the prices fall most of the producers respond by cutting on production and the revenues from these operations will decline and ultimately the revenues into government coffers will decline as well. The falling prices in commodities are depicted in Fig 6.

Australia reported a trade deficit of $2.75 billion in May 2015, a decrease of 33 percent from a revised $4.14 billion deficit in April 2015, as exports grew while imports fell. Despite this the trade has remained in deficit for the past year or so as highlighted in Fig 7. 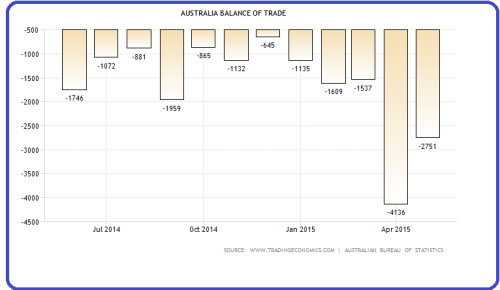 The biggest trading partner for Australia is China and as such developments in China tend to have a huge bearing on the value of the Australia currency.

The state of the Chinese economy

The Chinese economy grew by 1.7% on a quarter-on-quarter basis in the second quarter of 2015, accelerating from a 1.4% expansion from January to March 2015. Year-on-year, the GDP has advanced by 7.0%, the same pace as in the first quarter of 2015. This growth is largely attributed to the policy stimulus. For 2015, the government expects the economy to grow around 7 percent, the slowest expansion in 25 years.


From Fig 9 it is evident that the pair is on a bear run.

Bollinger Bands on the daily chart continue declining. The current levels are as 31 July 2015 are as follows: Upper band - 0.75390, Middle Band - 0.74024, Lower Band - 0.72914.The price range is narrowing down, reflecting recent high volatility and a correctional growth is possible.

MACD is growing. The histogram is above its signal line and has formed a buy signal. Short-term and very short-term buy orders are relevant given the fact that the pair is on a bear run. The Stochastic slow %D at 25.3395 just above the oversold position.

The key levels of support and resistance are as follows:

Given the analysis, most of the evidence points to downside risks to the AUDUSD and expecting the currency to depreciate further. The divergent monetary policy stance being implemented by the US Federal Reserve and RBA will lead to the USD strengthening further in the medium term. The fall in commodity prices and the slowdown in the Chinese economic growth will likely lead to a weakening of the AUD.

On the technical analysis aspect the trading ideas from the current formation are as follows: