I find it useful to look at the big picture from time to time. In technical analysis terms, that usually means inspection of weekly and/or monthly charts. However, I rarely get to see analysis of "ultra-high" timeframe charts, so I decided to make a couple of attempts of my own. Previously, I analysed long term charts of the Euro, the Yen, the Cable, the Swissie, the Loonie, the Aussie and the Kiwi.

Today I'll have a look at yearly and quarterly Yuan* charts that are covering the period from 1971 to 2015. While the yearly may be of some use for a quick overview of price action, the quarterly chart offers more detail and makes trends, ranges and patterns more clearly visible. I will be focusing on the latter for my analysis.

*I use the term Yuan (capital letter) to denote USD/CNY pair. Though, the below charts are actually composed using both USD/CNY daily data (1971 - 2012) and USD/CNH tick data (2012 - 2015). Please see the "Onshore and Offshore Renminbi" paragraphs below for an explanation regarding both pairs. 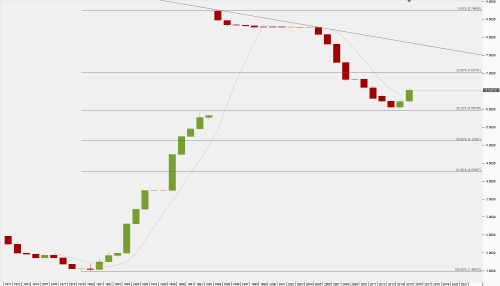 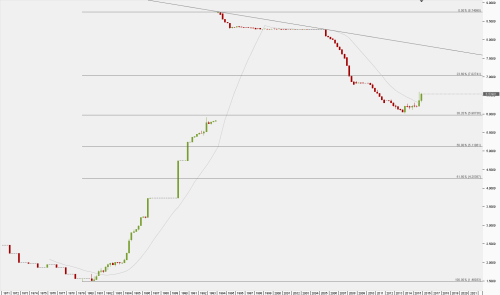 Both terms are often used interchangeably to describe Chinese money but there is a distinct difference between the two. The renminbi (meaning "people's currency") is the name of the official currency of the People's Republic of China while the yuan is the base unit of the renminbi. Much like sterling refers to British currency and pound to its primary unit.

The renminbi is currently traded in onshore and offshore markets. The latter was established with the aim to gradually open up China to global markets while keeping its currency under control. Onshore renminbi (USD/CNY) is managed by the PBOC which sets the daily mid point (fix) based on several factors, including a poll of market-makers, previous day's close and the rates of major currencies. The bank allows it to trade within 2% band around the fix.

Offshore renminbi (USD/CNH) is a relatively new market - it was opened in 2009. Renminbi is allowed to trade freely in this market, though it's questionable whether and to what extent the PBOC is engaging in it. The offshore renminbi currently trades at a slight premium over its onshore counterpart but the gap is expected to close overtime and perhaps even the need for the former.

During the entire period that is covered by the charts, the pair has been subject to various peg regimes. The yuan was mostly pegged to the U.S. dollar, up until 2005. After that, more complex methods of calculating its value emerged, such as the one in use now - as described in "Onshore Reminbi" paragraph. The result is "peggy" price action, full of low-volatility candles and sudden big moves.

All three big devaluation/revaluation swings have something in common in that every one of them was basically a one-way move. There was little to no opposing movement during the swings, particularly in the period of the peg to the U.S. dollar. Exceptions have (so far) been short periods in which PBOC experimented with various peg settings and attempts to de-peg.

Given that the price action was driven by the PBOC policy rather than the market I find it quite fascinating that the 1994 - 2014 downswing bottomed (or so it appears) right above 38.2% retracement of the 1980 - 1994 move. It may have had more to do with the proximity of the 6.00 big figure, 1992 high and 1994 gap low just below the big figure - but that is also how a regular liquid market, driven by supply and demand, could behave.

China is moving from export based to consumer driven economy. That may mean more imports and less exports but doesn't mean that a weaker currency wouldn't benefit them. PBOC seems to have no problem fixing the yuan lower day after day. Technicals, such as a break above 5-year SMA and a bounce off of strong support near 6.00 (38.2% retracement, big figure, 1992 high, 1994 gap low) are also pointing to the upside. In addition, USD/CNY broke above Q3 2015 high recently and is poised to close there.

The potential for depreciation is huge: if 72K pip move from 1.48 to 8.74 devalued the yuan by 83%, another similar move from 6.00 to 13.00 would devalue it by "only" 54%. I'm not saying that the pair will move to 13.00 anytime soon, but even 33% yuan devaluation would put it near 10.0. The first big test will come in a way of the descending trendline drawn off of 1994 and 2005 highs.
Übersetzen in Englische Sprache Zeige Original Toggle Dropdown