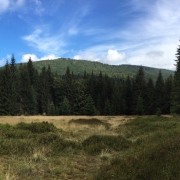 I use the strategy on the EUR/USD pair. Period bar used is 15 minutes. First I define the trend using the SMA of 200 periods. If price is above the SMA, trend is bullish and I look to go long. If price is below the SMA, trend is bearish and I look to go short. Next I use the RSI with default settings of 14 periods. If RSI is more than 70 and trend is bullish, a position is opened to buy at market. Similarly, if the RSI is less than 30 and trend is bearish, a position is opened to sell at market. I use the SMA and keep to 200 periods because it is widely used to determine the trend. The RSI is used again for the same reason except that it is not used like a ranged strategy but rather a trend following one. I use the 15min time frame so that it could generate more than 20 trades. And I set a stop loss of 20 pips and a target profit of 25pips after backtesting for the size of the price action. Volume is fixed at 3 million in order to have size to win the competition but also not incur too much of a drawdown.