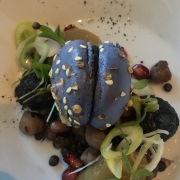 SloppyJoe_v9 is a strategy that trades EurUsd based on 5 min candle periods. The indicators that I have used are two different SMA's - both on a daily timeframe period - that are based on Joe DiNapoli trading tools; they are the so-called 3x3 and 25x5 SMA indicators. This means that the indicators are, respectively, looking at the 3-period SMA and the 25-period SMA. The SMA_3 is displaced 3 periods forward, and the SMA_25 is displaced 5 periods into the future which makes them leading indicators. The SMA indicators determine whether the pair is bearish or bullish. Furthermore, I use a combination of Stochastic and MACD indicators - on a hourly time-period - to identify market direction. All these indicators are set up as best as I could to mimic the Joe Dinapoli setup (as DiNapoli traders would use them) but they are not exactly the same as the genuine DiNapoli indicators because these are unique and need to be purchased (hence the name SloppyJoe - 'sloppy indicators'). The strategy trades countermarket which means when a bullish setup is identified it will sell, and vice-versa. I have done this because backtesting showed this to be more profitable than following the logical setup. The strategy openes positions long or short with a SL of 11 or 21 pips and a TP of 21, 42 or 79 pips. The higher the percentage of profitable trades, the better of course, and drawdown is limited because of tight SL. It trades 2.1, 4.2 or 6 or 9 milion per position. The strategy will execute a trade when the price of EurUsd (after the close of a 5 min. candle) is above or below both SMA_3 and SMA_25 and Stoch and MACD hourly both signal bullish or bearish direction. So, in the case of a buy position, for example, the price is below SMA_3 and SMA_25, and Stoch and MACD hourly indicators are both signaling a bearish trend. For a sell position to be opened everything is vice-versa. In backtesting the strategy opens between 30 and 50 trades a month.