Every Traders ultimate aim is to minimize risk to the possible extent and increase the profit to the extent possible..The technique I am elaborating here is one of such wonderful and awesome way of trading which provides huge gains with almost no risk.

To be called as a simple but a great method,it has to have following ingredients.

1.Simple (Every one starting
from a kid should be able to understand it)

2.Risk should be Minimal.

3.Reward should be substantial.

4.Stress should be minimal.

5.It should have worked over the  period  of time (statistical edge)

6.It should be adaptable (
Tradeable on any Time frame and in any conditions).

Further,  the caliber of a trader
or a businessman is judged not only by his profitability but also by looking at the risk he undertook to achieve that profit figure.

To all these questions,the
answer I found was “Trading Inside Bars “ .If an amateur comes to
me and says “I don’t know trading but I want to start trading profitably.Tell me
something worth to do it“,I would right away tell him to start trading with “Inside bars” as it
is not only simple to understand but also as simple as it to trade.

The trading world has given so
much importance to  outside bars that Seldom
the “IB” got the due  it deserved.

1. An IB indicates a remote activity within the timeframe of its construction.

2.Hence an IB, most of the times either indicates accumulation happening at the end of a substantial down move or an accumulation in midst of a rally or

4.The high of an IB is considered as an upper boundary

5.The low of the IB is considered as a lower boundary and

6.Breakout on any side is an indication that a particular party has taken over the charge by breaking the boundary or

7.In case of false breakout ,it is understood that the party which broke the boundary first is defeated and the opposite party has taken over the reins.

To be qualified as an Inside Bar
popularly known as an IB, a bar has to have  its Open/High/low and close within the body of
its preceding bar. 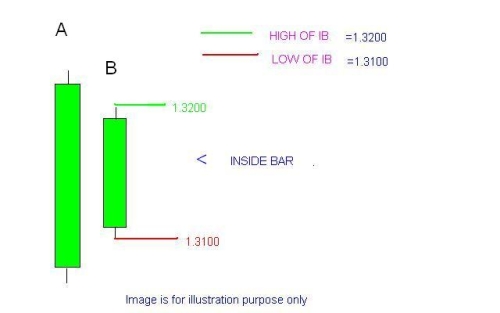 Next we come to a breakout bar .

A breakout bar is a bar which breaks either the high or low of the IB as the case may be. 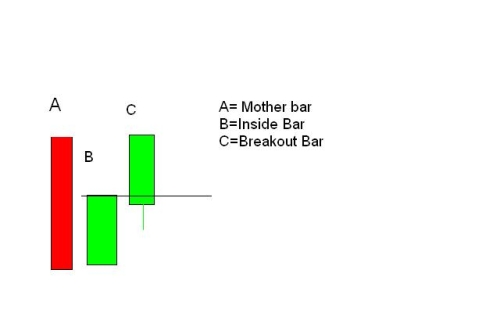 In the above noted example Bar
“C” is a breakout bar since it has broken the high of  IB.

Hence a mother bar,An inside bar and a
breakout bar are the essentials parts of trading this technique.

Trading the Inside bar:

As
soon as an Inside bar is formed , we keep 2 pending orders of equal quantity . 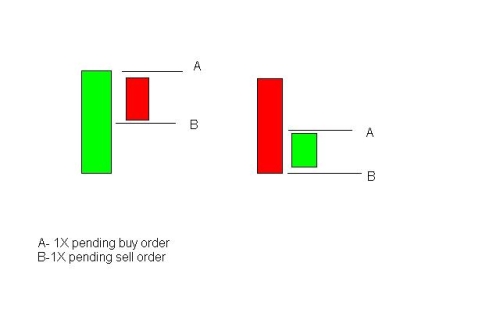 Scenario 1: When the high of the IB is broken: The Buy order gets
triggered and pending sell order will be modified with double the qty of buy
order. 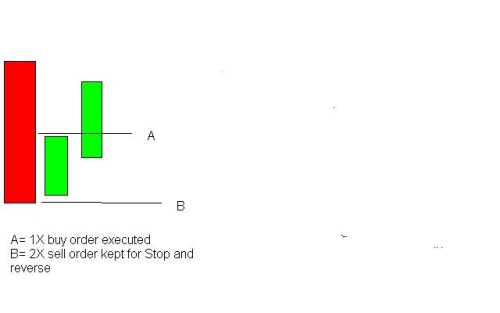 Lets take below illustration. The bar "C breaks high of IB at 1.5050.Say we have 2 lots of pending buy orders got executed. Now we place 4 lots of pending sell orders below the low of IB i.e:at 1.4990.

Price reverses and  breaks the low of IB at 1.4990.Now 4 lots of pending sell orders get triggered and now we have 2 lots selling orders as net position.We place stop above the high of bar C @ 1.5080. 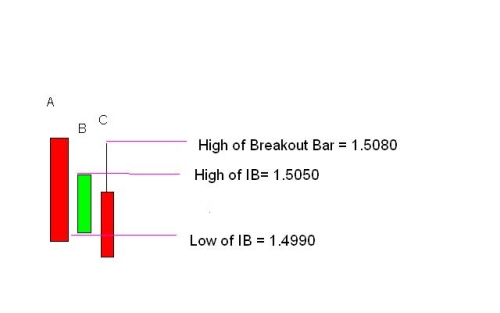 Scenario 3: When the low of the IB is broken: The sell order gets
triggered and pending buy order will be modified with double the qty of sell
order. 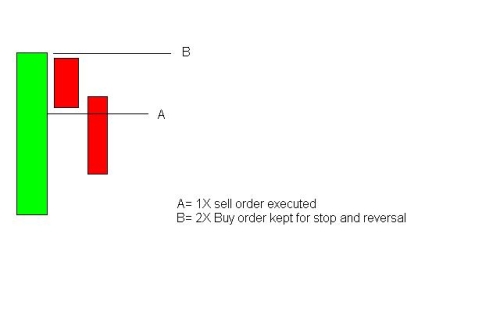 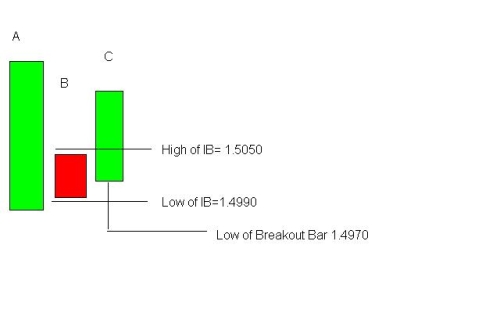 The most wonderfull
character of this technique lies in its R:R:very often we get to have trades of
1:5 ,1:10 R:R .Considering this fact 50% of the positions are covered at 1:3 and 25%
at 1:4 and rest till trend exhausts.

As we know the exit part is the one subject which cannot be defined universally.It is a combination of several factors hence I would say each trader can cover the positions according to his own established disciplines.

1.It is a simple technique both for understanding as well as trading.

2.No stress as rules are clearly defined upfront.

3.Risk to Reward is awesome .

4.Can be traded on anytime frame.