Dear Valuable Reader,
Have you ever wondered which currencies receive the most trading action? The data for the following chart comes from a survey done every three years by the Bank of International Settlements (BIS).
Note that trading volume adds up to 200%, because each currency trade has a pairing.
The Chinese Yuan is now the 8th most traded currency in the world, for a total share of 4.0%.
That means its share has doubled since the 2013 BIS report:
But what is bitcoin’s trading volume like, relative to other currencies?
Bitcoin: In the last 30 days, about $3 billion of bitcoin has been traded, which averages out to $100 million per day.

Other Currencies: The total amount of forex transactions per day is $5.1 trillion. The estimated daily turnover of just the Chinese yuan is $202 billion per day.
That means that the yuan has approximately 2,000x the volume traded of bitcoin, while total forex is 51,000x the size. In other words, bitcoin has a way to go to become one of the world’s most traded currencies.
Almost the traders in the world are trading now EUR/USD , which came in the 1st rank in 2016 for the most traded pair, by which reflects that it is the most volume of money fl… 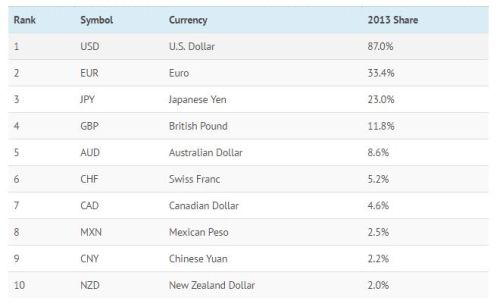 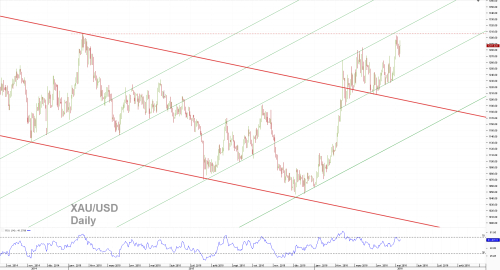 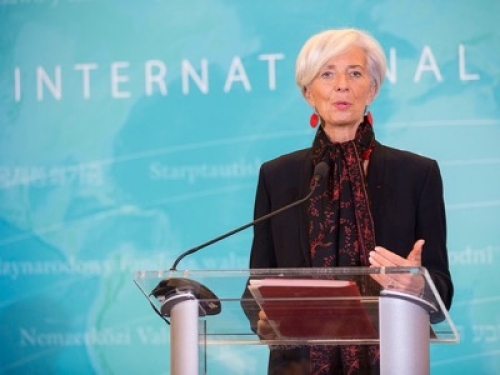 
What does the inclusion of the yuan in the number of reserve currencies mean for the world? In this article I would like to summarize some consequences and outcomes of that really important event in the world financial system which were expressed by the number of top-recognized financial experts throughout the world.
The effects are manifested only in the long term, but may prove to be very ambitious. As we know, on the 30th of November the Board of Directors of the International Monetary Fund (IMF) decided to include the Chinese yuan in the calculation of the basket of special drawing rights (Special Drawing Rights - SDR). De facto, this means that the yuan is recognized as a reserve currency on a par with the dollar, euro, pound and yen. The decision was widely expected. Back in early November, IMF Managing Director Christine Lagarde sounded fund analyst recommendations on inclusion of the yuan in the SDR. Why is the Chinese government so strongly desired to see the yuan among reserve currencies? What will change after the actual inclusion in the October 1, 2016?
In August, when there was a sudden collapse of the yuan, many commentators considered this declaration currency war b… 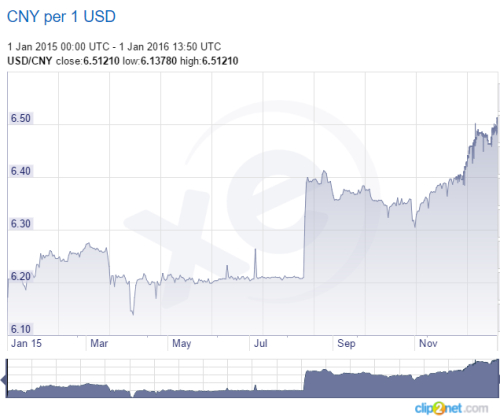 
Introduction
The global financial markets are in quandary and China is at the centre of it all. Like the epicentre of a massive earthquake the shocks are being felt far and wide, and like the eye of a storm, it is gathering momentum by the day.
This article looks at how the slowdown in the Chinese economy is affecting the global economies and financial markets with particular interest on how the traders in the various Dukascopy contests can trade the events. The Chinese economy grew an annual 6.9% in the third quarter of 2015 the weakest since first quarter of 2009.

GDP growth
China is the world’s most populous country, and is fast becoming a global economic powerhouse with an estimated GDP of USD 10.3 trillion in 2015. China's economy is now the world's second largest economy by nominal GDP and the world's largest economy by purchasing power parity according to the IMF. Until 2015 China was the world's fastest-growing major economy, with growth rates averaging 10% over 30 years. However the Chinese economy has been slowing down in 2015. At this juncture we should not that the Chinese economy is not in recession but the rate of economic growth has reduced.
Recent third qu…

It is crucial in FX markets for traders to choose currencies for trading and predict its future in order to be prepared from upcoming events. Azizbek Omorkulov.   With the fear of a global recession looming once again, it would seem that the lessons of a few years ago have not been learnt. The question is though which currency has the ability to replace the USD in case of the dramatic crisis in the US?  Considering the last discussions in Congress of the US regarding the debt ceiling of the country, we can assume that it can turned out to be that the US can meet default in nearest future. However nowadays we do not have a definite currency pretending to replace the USD as reserve currency in FX Markets. Therefore this article analyzes probability of different currencies to become a candidate to play the role of global reserve currency.  Extremely exciting currency for most of traders is EUR. Some traders may say that EUR can replace the USD as reserve currency. But we see that Eurozone have a lot of problems within its territory (Greece, Italy, Portugal), which sometimes become global from local size, because it can even lead to collapse of Euro…
读文章
翻译为 英语 显示原始 Toggle Dropdown