56
Introduction
The price action in silver since the 17th of April 20117 has been downright ugly to say the very least. Having reached its 2017 high on that day after trading at $18.725 per ounce, silver has declined in twelve sessions of the last thirteen, reaching a low of 16.72 on May 2nd. Having lost about 10.7% of its value from the peak, there seems to be no end to the plunge in silver prices.
Fig 1: Daily charts of Silver and gold prices
Fig 1 shows the daily chart of silver and gold, and the recent plunge in silver prices is quite evident. What is also glaring from the chart is how silver has under-performed gold in the period. Gold reached its high for the year on the same day as silver and has dropped from $1297.50 to lows of $1252 on the second day of May, a decline of 3.5%, which is nothing compared to the losses suffered by silver.
Is there something fundamentally wrong with Silver? Has the market overreacted? Will the markets have the courage to catch the “falling knife”? This article seeks to analyse the short to medium term outlook for Silver and possibly answer some questions in traders’ minds.
The Silver to gold Ratio
As can be seen in Fig 1, there is a stro…

Continuing trend PM sore eyes watched, but sometimes adding a simple line connecting the swing lips and downs can change what the eye sees. As a result, we were able to focus on reactions papers 1, 2 and 3 for comparison and evaluation, as explained in the chart.Typically, when the trend is completed, there is often some form of dramatic cost / volume of the activity which is required. An example would be seen in the activities of the left side of the diagram. Price dropped sharply in June, the lowest appeared as a potential end of a trend. What is missing and explains why it was not the end of the downward trend are two factors: the lack of heavy volume on / near the lowest, your typical sign of a shift from weak hands to strong hands, and the first reaction rally off the low was not so strong.What we see in gold is a steady decline with no apparent panic that forms the basis for the bottom. Very small range last week is the antithesis of panic. This shows that customers are kept under control seller slump. Sellers lost control, at least for a week. This opens the door to customers to begin reaction rally, and it remains to be seen. The strong rally of at least 3 weeks has been e… 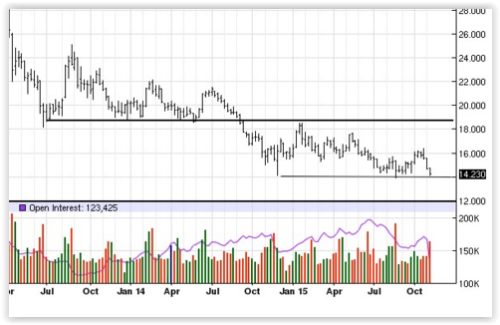 This article is an update for my last article "Black Days for Gold Is Coming"PrefaceIn my last article, I wrote about selling gold after breaking the strong support at 1540, I advised to sell at this place with small stop loss and great take profit. But what happened ? Gold fall dramatically in the Monday opening in the last week, it seems like that gold collapse.What happened for gold :Let's remember the broken support :The price of gold at 1540 is not normal place, let's see what this area represents.Chart Shows strong area at 1540Breaking the 1540 caused collapse :When gold price hit the 1540, downtrend accelerated and it seems that huge stop losses was hit, and this is exactly what caused the collapse. Briefly falling prices hit huge stop losses (turn from buy to sell) which causes more falling for prices.Chart Shows that gold ounce lost 220 USD in 30 hourGold recent Scenarios:After collapse of gold, in the long term we should look to sell gold again and again but in the near term retracements is expected and we will sell at the probable strong resistance available. Below we will discuss the probable retracements of gold and recent scenarios of the movement of gold.First scenar… 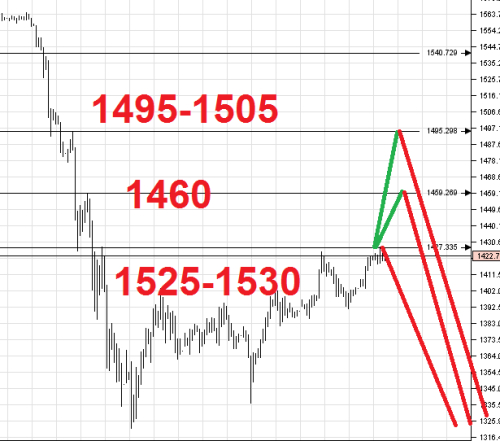 Preface No trend is up or down forever, this is a big market lesson for every trader, market is like a very quick taxi which you should be within it to gain (be sure you are not the driver).Gold double about three times from 2008 at the beginning of the financial crisis in the united states -after that in all the world- and it make continuous gains year after year. Chart Shows the strong uptrend for gold in the last yearsTechnical Analysis for goldFirst Warning : In 2012 the gold closed below the 2011 close which means that gold make the first yearly loss from 7 years, that's was the first indication that there something wrong with gold.For sorry if you depend on banks researches and fundamental predictions you will not believe that gold now is 1483 (14.4.2013) because they persuade us that the gold will be 2500 at the end of 2012. Really chart does not lie, it is obvious that gold is in downtrend and it broke strong and important support lines in the last period.In the monthly frame :Gold lost ground in the monthly frame in the last months of 2012 and it continue lose ground month after month. Charts shows the down tend of gold in the last periodIn the weekly frame:We often check … 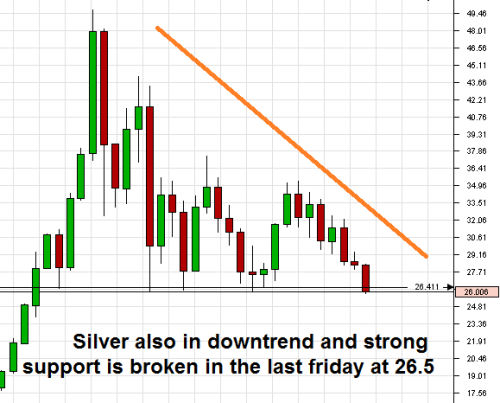 Too many politicians talk about the gold standard and gold price. No, I don’t mean Ron Paul, Garry Johnson or other libertarians and conservatives. I mean mainstream politicians. The first were deputies of the Swiss People’s Party. They suggested sort of currency competition. The issue is that they want to create a new franc backed by gold, which will be in use with fiat francs. As to me they should back their current franc by gold, no more. Even in US mainstream politicians talk about the gold standard. Presumptive Republican presidential nominee Mitt Romney promised to create a gold standard committee if he wins elletcions. It would be wonderful if Swiss and American governments return the gold standard to society, but I’m sure they won’t do anything. It’s the same old story: they promise and don’t do anything after elections. There is only one power in the world, which could fight against socialistic politicians and that is free market. Free market will introduce the gold standard de-facto. Economic agents will turn to direct gold transactions when gold price rises to 15000. People will return to gold standard, with or without political help. How it will happen? The 30 Yea… 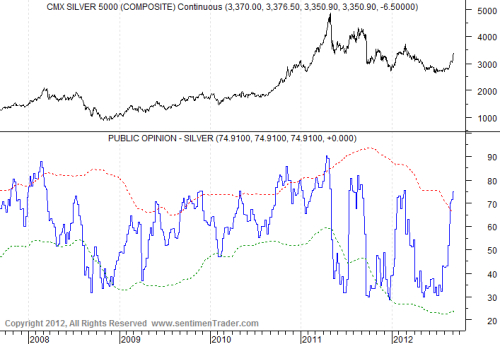 Its hard not to notice the vast interest in Gold investment since the credit crunch in 2008 when price of Gold rose from 700 USD per once to 1900 USD per once in 2011 as investors where looking for safe places to put there money. However Silver, although not so popular with general public as Gold due to fact that Gold holds a more glamorous perception, is a far better option for an investment point of view. During the latest recession (which by the way doesn’t look like ending) Gold rose from 700USD to 1900 USD. It is an increase of 170% in less than 2 years which is great for an investor, however Silver at the same period of time rose form 10 USD in 2008 to near 50 USD in 2011. It’s an increase of 400% giving investors a fantastic return to their money. So it’s obvious that investor opting for silver instead of gold has increased his reward on his investment much higher. And given the fact the Gold and Silver are in huge Fundamental uptrend, and both are strongly correlated is an easy decision to invest in silver instead of gold. Fundamental trend. Silver has been in strong uptrend since 2003 and the reason is simple the demand exceeds supply. Although the credit crunch …

INTRODUCTION   In my (small) experience I surely understood one thing: patience is your only real friend in trading. No patience? No money. With this article I will show one or two ideas to understand a possible range area in a major currency pair or commodity and so to increase the degree of confidence when deciding a position.   OPTIONS   Option trading is very different from forex trading and I will certainly not try to explain it here now, because to do it properly, would require me to write at least one book, and be completely out of main topic of the contest. As many (should) know, options in markets can be used for hedging purposes and/or as an addiction on a trading plan. In March 2012, you find an article published by AdrianWS1 where are well explained some of these strategies. An option is composed by a strike price and an expiry date. To simplify, here is an extremely quick example: If today I buy a call option in GOLD with a strike @1520,00 and expiry on 16th June 2012, means that if the 16th of June, price will be higher than my strike, I will have a profit; while in case the price will be lower, I will have a loss. Opposite…