Good Morning All Users;
overnight, the main focus was the OPEC meeting in Vienna. OPEC agreed on Wednesday its first oil output cuts since 2008 after Saudi Arabia accepted "a big hit" on its production and dropped its demand on arch-rival Iran to slash output. Non-OPEC Russia will also join output reductions for the first time in 15 years to help the OPEC prop up oil prices. The deal would reduce output by around 1.2 million bpd. Saudi Arabia will take the lion's share of cuts by reducing output by almost 0.5 million bpd to 10.06 million bpd. Its Gulf OPEC allies - the United Arab Emirates, Kuwait and Qatar - would cut by a total 0.3 million bpd. Iraq, which had insisted on higher output quotas to fund its fight against Islamic State militants, unexpectedly agreed to reduce production - by 0.2 million bpd.
From the US data front, Private Payrolls showed private employers stepped up hiring in November and consumer spending increased last month, the latest signs of economic strength that could further cement the case for an interest rate hike from the Federal Reserve next month. Private payrolls printed 216K from 147K prior, while consumer spending rose 0.3% after an upwardly revised…
Read article
Translate to English Show original Toggle Dropdown

1.0 Introduction
GBP has depreciated in the 7 months up to February substantially. This was most conspicuous on the GBP/JPY pair which
was down by over 20% and GBP/USD pair which has dropped by over 12% and reached a 7 year low at 1.3835. Afterwards
the GBP has bounced back up to around 161 and 1.44 and is currently trading at around 159 and 1.41 respectively.
The two main factors determining it’s further trend direction for the upcoming months will be the potential Bank of England’s interest rate decision as well as the referendum taking place on June 23rd and being decisive on whether United Kingdom will stay or leave the EU.
1.1 EU Referendum
The Fitch Ratings agency has issued a report stating that Brexit would “drive short-term disruption and long-term risks” and that the “precise impact would be highly uncertain”.The referendum factor is solely political and unpredictable, although BoE Governor Mark Carney has reassured that additional liquidity will be provided to the banking sector before and after the referendum in order to avoid any potential insolvency problems. However, as the campaign unveils we will probably see many turnarounds in polls and predictions and this wil… 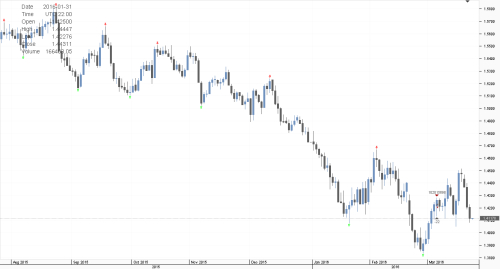 The relationship between currency and other financial markets

Financial markets price movement prediction is successful trading basis. And Experienced traders know, that trading the currency market requires not only knowledge of the forex area. Currency price movement depends not only on macroeconomic developments and other economic news, but also from other financial instruments movement.
Trader, knowing that the currency with which the market is concerned, can predict some of the forex market movements before they happen. To lead in this game and make more informed trading decisions, you need to carefully monitor the related markets.
Stock indices

In their “Monetary policy assessment of 14 March 2013”, the Swiss National Bank (SNB) decided to leave the exchange rate of CHF 1.20 per euro unchanged. The SNB said that “the minimum exchange rate is an important instrument in avoiding an undesirable tightening of monetary conditions. The SNB will therefore enforce this minimum rate with the utmost determination and, if necessary, is prepared to buy foreign currency in unlimited quantities for this purpose.” Last summer the SNB was a key mover of the global forex market. It was known to be buying tens of billions of euros each month, hoping to keep the franc weak to protect its exporters in the face of inflows from spooked overseas investors at the height of the eurozone crisis in May. Rumors abounded among forex investors that the SNB was buying Swedish krona and the Australian dollar. Bankers said there had been days when the SNB was the biggest single buyer of Australian debt. Figures released by the SNB later in the year confirmed the rumors; the proportion of “other” currencies on its balance sheet – the Australian dollar, Swedish krona, Danish krone, Singapore dollar and Korean won – rose. The IMF is considering switching CA…