I find it useful to look at the big picture from time to time. In technical analysis terms that usually means inspection of weekly and/or monthly charts. However, I rarely get to see analysis of "ultra-high" timeframe charts, so I decided to make few attempts of my own. Last week I analysed long term charts of the Euro. Here's the link in case you missed it: https://www.dukascopy.com/fxcomm/fx-article-contest/?A-Long-Term-Technical-Look&action=read&id=2626.
Today, I'll have a look at yearly and quarterly Yen charts. Both are covering the period from 1971 to 2015. Since platform's historical data for this pair is currently available from 1986 only, I had to fill in the missing data manually. I've drawn the candles using "Short Line" chart objects.
Yearly chart:
Quarterly chart:
Following the end of the Bretton Woods System (1971), during which the value of yen was fixed at 360 per dollar, the pair embarked on a long term downtrend which lasted until 1995 (although one might argue that it still lasts). After that, the pair entered a wedge-like sideways consolidation but it did broke below 1995 low in the 2011-2012 period. The low was set near 75 and the pair turned back up from ther… 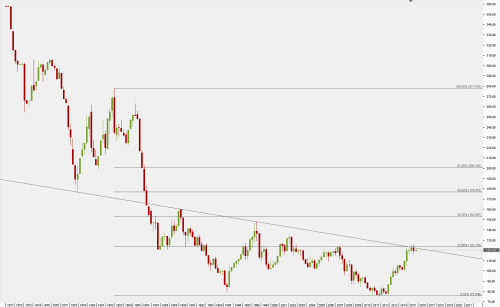