1.0 Introduction
The agreement with the creditors on the third package of financial assistance worth 86 billion euros has been made in August 2015. Greece has solved part of the problem. On charts we can see EUR strength.I am writing this article in the middle of August month and I see huge space for EUR gain in next weeks.
2.0 Technical analysis

EURUSD showed strong weakness in the end of July. Price went down to1.0845 and weak momentum gave us thoughts about main bearish trend continuation. On Figure 1 we can see August low.
Figure 1: EURUSD daily chart with volume
I am monitor EURUSD volume and price action, but he most important thing is future direction. On daily chart on Figure 2, we can see that EURUSD fight to go above Daily Ichimoku cloud.
Figure 2: Daily chart EURUSD and Ichimoku indicator
On Figure 3, price action already has broken H4 RSI trendline and try to reach 1.12 and than 1.145. 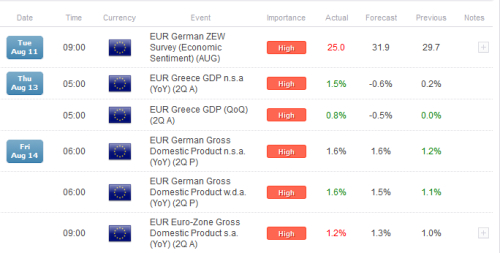 The summer is upon us. Traditionally this is a slow period for currency pairs. The forex market is still dominated by large banks and bankers. They, like other employees, like to take their annual holiday in the summer. Let’s take a look at a chart of the Euro to see the summer effect in force.
The rectangles on the chart above mark July and August, the two slowest months for many forex pairs. As can be seen on the chart above, trading activity tends to go down, volumes decrease and pairs usually trade in a range during this period of the year. Last year this wasn’t the case because we got some nice downward trend in the Euro. But going back several years, the effect is clearly visible. In fact if you want to see a similar trend during July/August like we had last year, you would have to go back all the way to 2008, at the height of the financial crisis.
The summer effect is starting to rear its ugly head this year as well. We’ve seen vicious reversals in most majors. For example today (July 7th) the Euro was down by 130 pips and then all of a sudden a rumor about Greece pushed the single currency higher by over 100 pips. Liquidity is low and even insignificant news can cause maj…


Because Greece is one of the most watched economic events in the past weeks, I want to talk a bit about the history of the Greek economy. This country isn't in this debt problem by chance of course, it has a track record of problems. Let's get started from the beginning.
The economist Charles Bullock has published an interesting essay on an economic experiment made by Dionysius the Elder, which was the ruler of the Greek city state of Syracuse from 407 B.C. to 367 B.C. What this leader did was to print more drachmas, which was the official currency of Greece during several periods in history, after he ran out of debt to fund his military campaigns. Because nobody wanted to lend him anymore money he forced his citizens to hand him all their money. Like this wasn't enough, after all the coins were collected he simply restamped one drachma coin as two drachmas. The problem here is that just printing more money was not a reliable way of creating more wealth. So Greeks have made a mess when it comes to economy for a long time.
Coming to a more contemporary timeline, if the Greek leaders had learned something from the past they would have not embraced the Euro as the common currency of …

In recent months the uncertain financial situation in Greece has had some influence on the global financial markets, but not until the recent turmoil did it cause such substantial impact on various financial markets.
The Greek Turmoil
The end of June was the deadline for Greece to make further payment to the International Monetary Fund in the amount of 1.6 billion euros. Greece doesn’t currently have this kind of money so in order to pay up this debt on time Greece has to obtain further funding from the three sources which have bailed out Greece already twice, in 2010 and 2012, that is the IMF, ECB and European governments. Maybe it would have been better to have let Greece default atone of those times instead of lending them more. Afterall it has has defaulted 4 times since 1800. However, letting it go bankrupt with the European economies not fully yet recovering from the financial crisis, it could have had a disastrous impact on those economies. The financial markets seem to be much better prepared for a potential default now as the exposure of international financial institutions (except ofcourse for the main creditors: IMF, ECB and European governments) is very limited. The imp…

In spite of periphery bond yields rising to record highs in the past couple of weeks, the Euro has managed to hold above the recent low of 1.2285. Why is this so? One would expect the Euro to have continued it's freefall with news of Spain's banking crisis and suggestions that Italy will be next.There are two reasons for this as I see it. One is Greece, and the other is....Greece.Firstly, Greece failing to elect a new government and talk of possibly leaving the Euro caused May's massive drop in the Euro as well as other risk sensitive currencies such as the Aussie and Kiwi, which were hardest hit. Until there is some clarity over Greece nothing will change much. Expect a great deal of political rhetoric and rumours to exaggerate intraday moves over the next 2 weeks until the mess starts to get cleaned up. Whether Greece stays or goes, the immediate future should be treated with great caution.The other reason for the weeks higher close in EURUSD is that many short positions will have been reduced, hedged or closed before this weekends' event risk. Only the bravest will hold over the weekend with a large possibility of a significant gap when markets reopen next week.Does news make pr…

In basic
Macroeconomics class we were all taught that each country is on a different
business cycle. In European Monetary System there are 17 countries, putting
them all together in (one size fits all policy) does not work. If one country
has a booming economy and the other country is in a recession, by taking one
monetary policy for the two countries it will benefit one and harm the other. It
benefits countries with big economies and weakens those with smaller economies.
Greece
To have a
Trade Surplus in any country, the country has to be able to increase the
country imports, you have to be competitive in either quality or price of a
product, and Greece does not have these advantages, and services are hard to
import to other countries.
That led to
Trade deficit for Greece, the government did not have an option except to
borrow from financial markets that will increase the debt over GDP ratio. Debt
and interests are growing overtime, and it will be difficult to repay. Debt
over GDP ratio of Greece was 94% in 1999, and kept growing to 145% in 2010, and
it is expected to grow to 173% in 2013, in accordance to Eurostat. In the past
100 years, Greece has defaulted 15 times, and at this…

Before explode of financial crisis in 2008 Swiss franc gained compared to US dollar almost 20% in six months. Now his quotation rise even faster. Only from beginning of spring Swiss franc gained more than 20% compared to euro and US dollar and most of this move from beginning of the July. This situation forced Central Bank of Switzerland to intervene by throwing 50 billions francs on market and decreasing bank rates. This brought temporary abreact on markets. But why investors buy francs and take him on all-time highs? This is all cause by losing fate in euro and US dollar. Considered as safest harbor for money in insure times, franc can indicate incoming financial storm. Rising public depts, low efficiency of saving programs and no solid plan from western governments to solve this problems this was real cause of investors exodus from stock markets in recent weeks bringing down world indexes. Recent decision of Standards & Poor about downgrading the nation credit rating of United States from AAA to AA+ has been surprise for some of us but macroeconomic data clearly shows that global economy is slowing on both sides of Atlantic. United Kingdom probably will enter in second p…