Today we are going to learn how to trade in Harmonic Pattern Gartley. First of all, I want to give you brief information about Harmonic Pattern history. Most of Forex, Stock, and Cryptocurrencies traders use harmonic pattern trading method at the advanced trading. Scott Carney President and Founder of HarmonicTrader.com has defined a system of price pattern recognition and Fibonacci measurement techniques. He gave the name and determined harmonic patterns such as the Bat pattern, the Gartley pattern and the Crab pattern.
This article, which I wrote for you provide my own look on harmonic trading. The most famous formation among the Harmonic Patterns known as Gartley. Let us say how to draw formation. When we draw the formation like as below, this is the gartley formation. One of the most important note is that XA must be a impluse. Gartley can be seen in a uptrend or in a downtrend. In this formation the impluse begins then correction again impluse begins. We will use X A B C D letters in Gartley pattern
Our first movement should be impluse in uptrend or in downtrend. Name is this movement is XA. First rule is that XA must be impluse. After …

Abstract:
In the material below I have tried to explain how can be used Fibonacci Retracement as an important tool to predict forex market. In this article I have included some graphic formats of Fibonacci extension/expension also with Fibonacci retracement and also rules to perfect chart plotting. I have analyzed some examples of Fibonacci retracements pattern in a downtrend and in an uptrend. In this article I have used and combine material from different sources trying to create a start point for those one of you that are interested.
Keywords:
Fibonacci ratios, downtrend, uptrend, support and resistance levels RSI-Relative Strength Index.
Who is Fibonacci?
Leonardo Bonacci – also known as Leonardo Fibonacci – was an Italian mathematician in the 12th century. He was considered the most talented Western mathematician of his time and one of the greatest of all time. Although Fibonacci himself did not come up with what is now known as the Fibonacci sequence, he certainly introduced the phenomenon to the West in his book Liber Aba.
What is the Fibonacci sequence?
Most important Fibonacci levels-
For Fibonacci Retracement (in %)
0
38.2 -Importa… 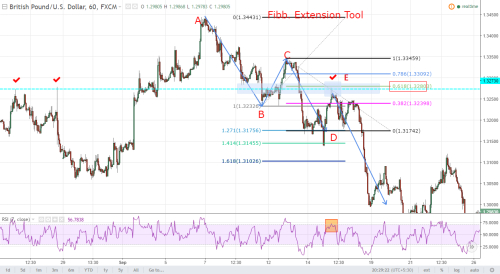 Introduction
I find it useful to look at the big picture from time to time. In technical analysis terms, that usually means inspection of weekly and/or monthly charts. However, I rarely get to see analysis of "ultra-high" timeframe charts, so I decided to make a couple of attempts of my own. Previously, I analysed long term charts of the Euro, the Yen, the Cable and the Swissie.
Today I'll have a look at yearly and quarterly Loonie charts that are covering the period from 1971 to 2015. While the yearly may be of some use for a quick overview of price action, the quarterly chart offers more detail and makes trends, ranges and patterns more easily observable. I will be focusing on the latter for my analysis.
Yearly Chart
Quarterly Chart
Broken Trendline
One of the first things that I noticed on the chart is the upward sloping channel that the pair traded in from 1971 to 2003. The channel bottom (trendline) was broken in 2004 and has been acting as a resistance since. It capped the pair in 2008 and 2009 and I expect it to continue to play that role, should the pair meet it in the future. The trendline is currently centered around 1.3750.
Fibonacci Retracements
I re… 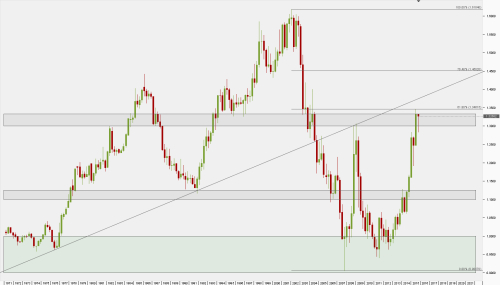