It has been debated for years whether or not stocks should be traded around the clock, but so far the disadvantage and impracticality outweigh the advantages. Even though we currently have the technological structure to support such market hours’ extension as seen in Forex and Commodities markets, the institutions and exchanges aren’t really pushing towards such endeavor.
Firstly, the relationship between liquidity and market data – news and analyst readings, propose a contradictory stance on keeping the markets open as we may still be able to act on news and data coming after hours but the lack of liquidity reduces this benefactor. No Liquidity no good prices, even though we might get breaking news and data there won’t be that many traders and investors to act on it as most will be ‘asleep’. Market makers working within specific office hours are simply not active 24 hours a day as hiring additional staff and employing larger capital into their operations would not always present more benefits. While the retail investor can trade throughout the day, the costs for running its operations are minimal compared to institutions. When it comes down to brokers and dealer’s extending wor…
Read article
Translate to English Show original Toggle Dropdown


The story of the summer, and perhaps of the last year has been Donald Trump’s campaign.
A resilient populist, who, despite every known law of political campaigning, manages to stay in competition.
The clashes between Clinton and Trump were rough. They’ve fired each other bizarre accusations.
Recent polls are favoring Clinton, but as the election day comes closer the gap between both candidates shall shrink.
Each candidate need 270 electoral votes to win the presidency and the toss-up states will play a major role in the final stage of the election – the following link allows you to stay in touch with the race, it’s the 270 calculator: which states will it take to win?
If you thought Brexit was scary for financial markets, wait for the reaction to a possible Trump victory.
Safe havens would get a boost, the swiss franc, the yen and gold.
The dollar would fall significantly as the U.S. would be regarded as abdicating its role in world affairs.
The euro would strengthen because it is the only big alternative to the dollar.
Matthew Lynn [1] a reporter at Market Watch stated:
there is no real sign that the global markets have started taking
[/1]…

Introduction:After writing my previous article on Risk Management I received some questions about how I use it and how successful it is. So I thought that this, my next article, could address some of those points and could be used to show you a "model Portfolio" likened to those seen at hedge funds and large mutual funds.To start with this isn't really a set and forget portfolio where I am setting out to achieve high yield via dividends, or protect my capital with low beta investments. Instead in this it requires daily monitoring and constant buying and selling of various securities.Portfolio:As mentioned in my previous article, I split up my portfolio into different areas defined by Percentages of total account value, as seen below.DJIA - 25%US 5YR - 15%Gold - 25%USDJPY - 10%US 10 YR - 15%High beta - 10%I will go through each section and show why I have these and why their weightings are as such.DJIA - Dow Jones Industrial Average:This basically contains 30 of the largest companies within the US which is indexed. There are many ways to trade it from owning individual stocks within it or trading forms of derivatives such  as Leveraged ETF's or Futures contracts.Personally I have my… 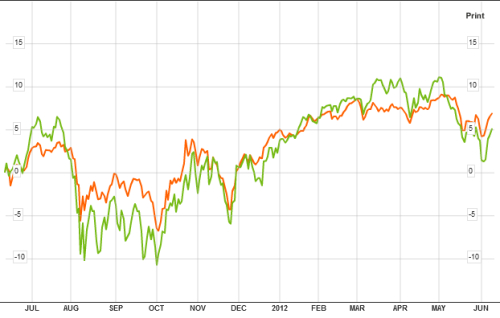 Traders all around the world are looking for the best trades to make the most profit. Correlations are very important to a successful trader as traders can HEDGE positions or see if a correlated pair is about to BREAKOUT.  Correlations are a statistical measure of how two currency pairs move in relation to each other. A measure of -1 is when they track perfectly opposite to each other for example if EURUSD went up 100 pips and AUDUSD went down 100pips they would have a correlation value of -1. On the other hand A value of 1 is when they both move perfectly with each other. So both move up 100 pips together. It is very rare to find perfect correlations but some are very close to 1. However a common example is A BONDS yield and price. So for example If the Price of the bond rises the yield falls and vice versa this is perfectly inversely correlated. Here are some examples of Correlation over hourly charts on some of the most popular currency pairs. AUDUSD - EURUSD : 0.949 AUDUSD - NZDUSD : 0.998 AUDUSD - GBPUSD : 0.957 EURUSD - NZDUSD : 0.954 EURUSD - GBPUSD : 0.999 NZDUSD - GBPUSD : 0.962 As you can see here some such as AUDUSD - NZDUSD are very …
Read article
Translate to English Show original Toggle Dropdown

Why are we trading FX? Is it just because of the low transaction cost? Is it because the FX manager area used to be unregulated?Nope. Here's why we trade it. Here's why no investment manager can not afford not to invest in FX as a source of uncorrelated alpha.FX is the largest market in the world. It trades more than 4.000 billion USD per day. It's liquid, the amount of market participants is high, there is a natural trading demand (from corporates, individuals, businesses that need to buy other currencies), it's easy to price/value.FX has been a cash cow in investment banking for decades. Investment banks have had always FX prop and FX flow trading and it is a core element of investment banking. In Asset Management FX it's only something to hedge, to control exposure, to be aware of the risk – rarely traditional asset managers see FX as a core source for yield. Strangely only few managers have discovered FX investment products as a source for uncorrelated yields....yet. Today fixed income rarely lives up to the asset-liability-management (ALM) requirements (approx. 4% p.a.), equities are too volatile and the returns are too unstable, alternatives are often illiquid and hard to pri…
Read article
Translate to English Show original Toggle Dropdown