Communauté
Concours d'articles
Why Ignorance Is Bliss on Monday Morning

Come Monday, we are all scurrying up to set-up charts for the week's bias. Given that the weekend was a negative close for major currencies, the Asian markets and Bourses are a bit neutral and relying on the European news for direction. Generally I am reluctant to trade on Asian Monday, markets are directionless unless there is a pertinent news making the currencies move. As Nicholas Taleb, puts in his book "fooled by randomness", there is news and there is noise, we need to have the ability to separate the news from noise, generally I tend to keep away from reading or listening too much. Ignorance is bliss.

In the world of randomness, I decide to toss a coin and start taking positions to see if technicals do better or would coin toss beat the best analysis.These are my two cents worth and my positions as a result of the coin toss experiment! - More on the experiment at shankariyerh.blogspot.in.

EUR/USD - 1.2888 - EUR/USD has lost the 1.29 handle into early trading, this is just a case of thin volume trading. Given this, we will try and sell rallies back up to Thursday's high of 1.2978 and aim for our first objective of 1.2626. Technical Bias is still Negative

USD/JPY - 80.00 - Very slow performer, JPY has reached its resistance at 80.00 with Bias still down, we aim to go short with this pair, aiming for the 79.38 lows. This is not the sexiest pair for day traders, so unless you are a power packed, volume player, shy away from this pair.

USD/CHF - 0.9320, My technical pair of the day, USD/CHF is approaching 15 March highs of 0.9334 and with overbought indicators, I expect this to hold in the interim, giving a nice trading opportunity. see image set-up below 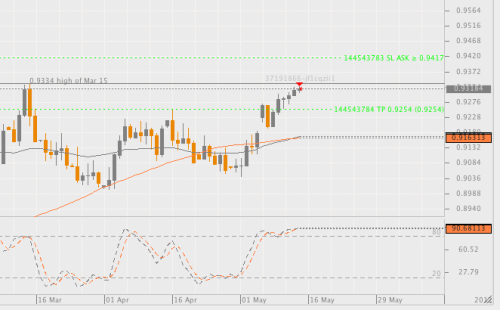 AUD/USD: 1.0013, Star performer for two weeks in a row, AUD/USD has been in a steady decline and reached breached the parity prices in thin volume trade Monday morning. I will again as for Euro, aim to trade rallies to the 1.0115 high on Thursday and aim 0.9883 Dec 19 low.