Community
Article contest
7 Ways to Do nothing and Become more Profitable
Traders spend a lot of time discussing the next best thing,the next great system. If the market is trending, a flurry of trend following
systems get posted on trading forums. We look for the next best indicator, the broker with the lowest spreads, the best trade settings. We backtest every variable of our system. What would happen if I tightened the stoploss? What if I extend my take profit by 10 pips?

This phenomenon of ‘’Doing More’’ goes beyond trading. We seek out productivity books and gurus to teach us how to cram one more thing into our already busy lives. We always want to do more, make more money, create more friends. But being profitable is not always about doing more. Here are some of the things that you can STOP doing and ultimately become more profitable.

The following situation was a regular occurrence for me back in my scalping days. I would trade the market for 3-4 hours, have 3 small wins of 5-6 pips then proceed to lose all it all in one trade. I would get angry at the market, angry at myself for wasting 4 hours of my life, angry at the broker for the large ‘’unbeatable’’ spreads. Next thing I know, I’m back in trying to get back in the green with the London close just 15 minutes away. 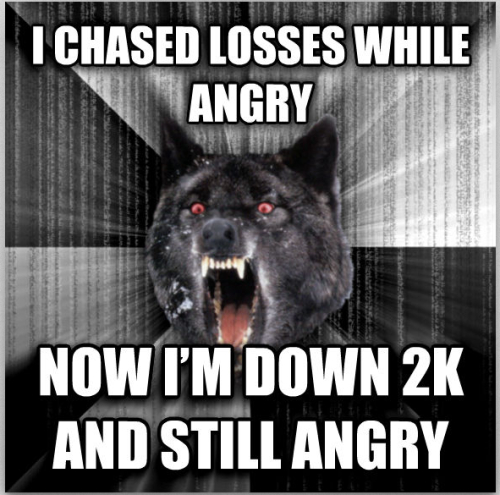 This happened to me few months ago. I placed a trade with a 50 pip take profit and a 5 pip stoploss. Forty pips in the green and I decide to tighten my stop to break even. Doing this had no negative repercussions in my backtest across 50 trades. But the market being the fickle bitch that it is, decided it would be fun to fall all the way back to my break-even point and take
it out, only do then reverse course and hit 1.3740, where I had my original take profit level. If I didn't raise my stop to break even, I would’ve won the trade and make $800 in the process. I closed my trading platform, then I shut down my computer and I took out my dog out for a walk in the park.

Three years ago I would probably throw my entire trading account down the drain by trying to get back at the market. Don’t trade when you’re angry. This is easy to say but hard to do. Anger clouds the mind and leads to bad trades and busted trading accounts.

It was a long day. You’re back from work and you’ve just put the kids to sleep. You try to squeeze in some trading in the evening when everyone’s asleep. But it’s not going too well is it? Don’t trade when you’re tired. We need a rested mind to make good trading decisions. Back when I used to scalp for a living, I would take my best trades in the morning. I experienced my worst losses near the end of the trading day because I was tired. Or bored. Which leads me to number three!

We’ve all been there. You’ve been staring at that computer screen for the past 5 hours and you haven’t taken a single trade. The
rational part of your brain congratulates you for following your system to the letter, but the subconscious, bored out of your mind part goes nuts screaming obscenities ‘’You haven’t taken a single trade today you lazy bum.’’ He goes on ‘’Are you scared to lose again you coward?’’. 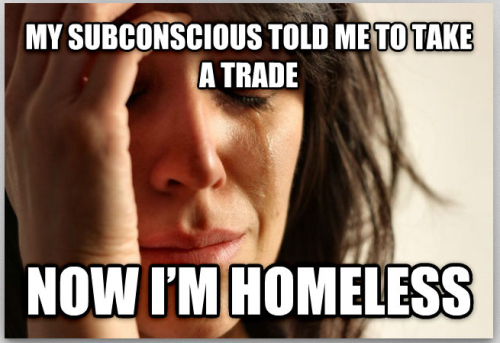 Don’t listen to the subconscious part of your brain. He’s an asshole.

Don’t trade when you’re sick. I see this common mistake among my trader friends who work and can't trade during the day. Getting the flu is a like a godsend, they seize on the opportunity to trade the busy New York open or watch the reaction to the monthly Jobs Report live. This is a bad idea. Illness can wreak havoc on your body and your mind. Furthermore, drinking too much of that flu medicine can mess with your brain. Just something I heard.

If you’re a short-term trader or a scalper, your day should start with the London market open and end with the London market close. Avoid trading outside of this 8 hour time window. Spreads are bigger, volatility is substantially lower and price movements are more erratic and unpredictable. If you’re a swing trader or a trend follower, consider not trading this summer. The period from the start of July to the middle of August, AKA the Summer Doldrums, is a well-established forex phenomenon. Volatility is low and currency pairs tend to move in a range. Most of Europe likes to take it easy and relax during the summer. Bank traders are no different. If you need volatility to make money, cut out the low volume periods. Reversely, if your trading system does better during ranges, consider trading this summer and/or during the Asian session.

Don’t be Around Negative People

Don’t be around negative people. Nobody likes Negative Nancy, Bitter Betty, Debbie Downer and ESPECIALLY Gloomy Gus. Screw those people. They bring you down, they bring me down, they bring everyone down. Your mom never supported your decision to become a trader? Make other plans for Christmas this year.

Surround yourself with positive people. Minimize contact with friends and family members that don’t support you. Better yet, cut them out of your life. Angry after the market stops you out by 0.1 pip only to turn around and rally? Time to shut down your trading platform and go for a walk. Home sick with the flu? DO NOT turn on your trading platform. Catch up on Game of Thrones or South Park.

We spend so much of our time trying to see everyone, do everything, be everywhere. But a lot of what we do is not only a waste of time, it’s downright counter-productive. If doing more fails to give the results you want, maybe it’s time to try something different. Do less. You will be more motivated, happier and ultimately more profitable.
Translate to English Show original Toggle Dropdown