Community
Article contest
United States Labour Analysis
Introduction:
In this Article we are going to analyse recent trends in the labour market for the US and see the most likely directions in which the Labour market will take over the coming years.
Since the Global Financial Crisis in 2007/08 across the world, a rise in the unemployment rate has been noted in most western developed countries. In most places the Unemployment rate has stayed higher and there have been few signs of recovery in nearly every country.
Problems:
- High unemployment 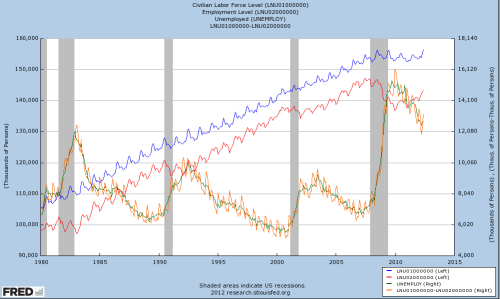 *chart from Federal reserve of St Louis' data bank
As seen in this chart above, the unemployment rate (Spread between Employment level and Civilian Labour force) has risen significantly since the recession and while is trending down, it is  doing so at an incredibly slow pace.
For the economy, High Unemployment rates are bad. Quite simple to understand, when there are less people with jobs there is a lower level of demand in the economy. When this occurs people employed in sectors such as retail will lose jobs as companies require less staff to sustain the required demand levels.
From here a downward demand spiral ensues as those unemployed add to the decrease in demand and so the process repeats itself.
Furthermore for the government high unemployment is terrible. Not only do tax receipts fall as less people have jobs to pay taxes but more people require welfare and other state funded benefits. These two effects combined cause a budget deficit - Where the government spends more than it receives - This in turn leads for the U.S. government to borrow money from the markets in the form of Government issued bonds.
It has also been noted in many studies that there is a high level of crime associated with high unemployment and the correlation is easy to understand. Once again a firm downside to high unemployment levels.
As is evident, the government clearly would prefer the unemployment rate be as close as possible to zero. While in practice the rate can never be zero, A figure of around 2-3% would be seen as perfect and a great success.
- Employment vs. Population ratio: 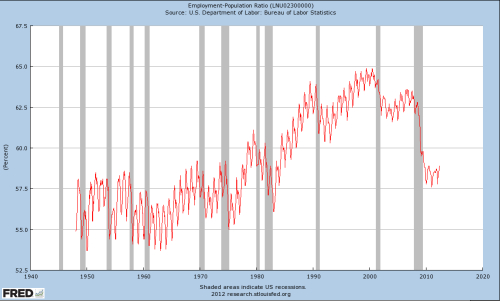 This Ratio shows what percent of the working age population is employed, between the 50's and 80's the rate trended around 56-58%. After this it exploded upwards before reaching almost 65% of the population having jobs.
Since the financial crisis this rate dropped considerably and is trending towards the normal of around 58%.
While compared to the 90's and 00's the current rate would be seen as a tragedy but when put in context it really isn't something to off great concern.
- Civilian labour force participation rate:
This is the percent of the entire population that is either classified "unemployed or Employed". In basic terms it is the percent of Americans who are eligible for work. This is another key indicator for the labour market, and much like the employment - population ratio has started trending down from recent highs and is falling back towards rates seen in the 50's and 60's 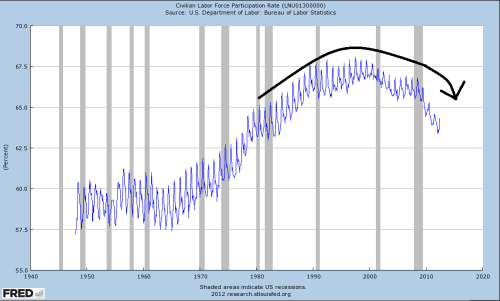 *chart from Federal reserve of St Louis' data bank
However much like the previous chart the rise through the 70's and 80's was artificial and a main cause of the post-WW2 "baby boom". Even though there will be a greater strain on the dependent age groups this shouldn't pose many problems for the US.
-Average weeks unemployed: 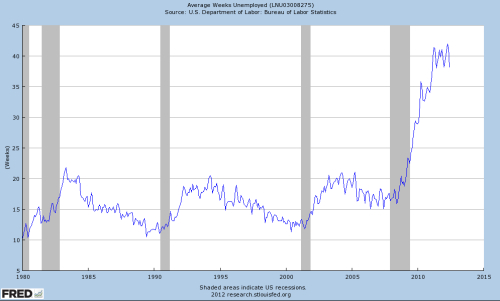 These statistics are more worrying and would be of greater concern to the US government. The amount of weeks that a person on average is to expect to be unemployed has exploded throughout this recent recession and is almost double that of the highs seen in any other recession since 1980.
The most recent data shows no real sign of improvement and this is a sign of weakness in the labour market. However the majority of the problem lies with persistent unemployed, those who are people who may be unemployed for many years and don't require the skillset to get a job.
As I will highlight later, there are jobs available, but I believe employers are spending much more time and money in hiring real quality and only those who have degrees or many years experience are getting the jobs. This may be a key reason why this rate has spiked higher, and due to the main reason, we may be in for a long term shift around the 40 weeks mark and may never drift down towards 15 weeks again. 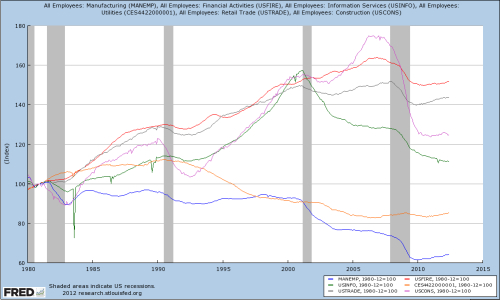 *chart from Federal reserve of St Louis' data bank
In this chart, I've indexed the 6 major sectors of the economy to 100 as of 1980 and shows how different sectors have coped since.
What's instantly noticeable is that the number of people employed in the manufacturing industry is ~65% of what is was 30 years ago and the utilities industry is around 85%. This highlights a shift in the economy of the US with it moving from primary and secondary industries to tertiary and quaternary ones as is seen with the much higher financial and retail trade number of jobs.
Unsurprisingly, telecoms rose rapidly leading up to the dot-com bubble and has been consistently falling ever since.
Furthermore the housing bubble showed with the rising construction jobs but once again this has fallen since the recession.
However there are signs that of recovery in key sectors such as retail trade, financial and most importantly in my opinion manufacturing. For me, the US needs this to grow organically and push unemployment rates down.
-Private vs government employees: 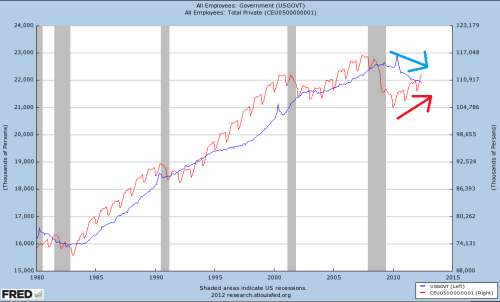 *chart from Federal reserve of St Louis' data bank
This is one of the promising signs of the US labour market, it shows, while even though private sector jobs are lower than 2007, they are on the rise.
In my opinion, the trend in government jobs is good as a smaller government with greater efficiency is best.
This only proves one thing; there are jobs out there for those who have adequate ability and experience.
Future of the labour market:
The Future as with anything is uncertain, but the most likely outcomes are a drift lower in the unemployment rate and slightly improving NFP data. Of course this is what the trend suggest and what most analysts expect to see.
Federal reserve Bank of San Francisco President said - "we expect Unemployment to hover around 8% by year end while inflation around 2% by the end of the year."
This year even more so than most is key with regards to the labour market as it is an election year. It has been shown that over 65% of people vote with respect to current economic conditions and non  more important than unemployment rate.
For this reason the upcoming few months of data, for example the unemployment claims, unemployment rate and non-farm payroll will be more key than ever.
This next chart shows the high correlation between unemployment rate and claims and in recent months there has been an evident divergence showing a compression is likely. 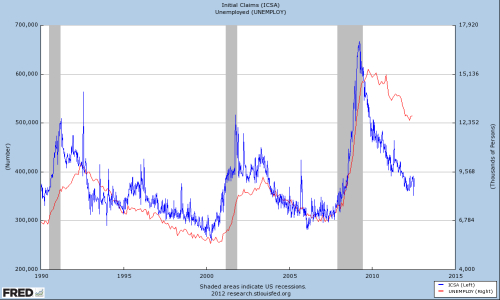 A few weeks ago we saw a great print of 350k but this week was higher than expected almost nullifying the 350k data release. These claims are expected to meander towards the elections with most likely a downward bias.
In regards to financial markets expect heightened volatility around "NFP friday" and the weekly initial claims data.
I'm no political analyst, so I don't fully understand the effects of Obama vs. Romney on stocks, CCY's or commodities. But I am sure of one thing, the labour market is going to be the top of the agenda for many people over the coming few months.
Conclusion:
The state of the labour market is fragile, and the upcoming months can be vital in determining the future of the US economy not only in presidential terms but also in the general economy.
But every person, regardless of whether or not they are involved in the financial markets should keep an keen eye on the labour markets.
I will leave this article with most likely a coincidence but somewhat shocking chart. 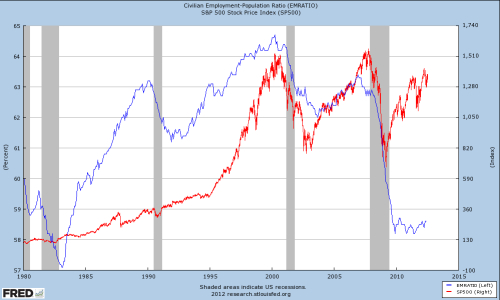 *chart from Federal reserve of St Louis' data bank
As shown, it seems the S&P500 (red) is lagging the long term civilian unemployment ratio by a few years. They both show a clear Head and Shoulders pattern before the Labour data crashes to a really low value.
Who knows, the S&P could fall considerably but on the other hand it may not, only time will tell.
Many thanks and good luck.
Adrian.
Translate to English Show original Toggle Dropdown