In May 1997, the new government handed control
over interest rates to the politically-independent Bank of England Monetary Policy Committee (MPC). In few
words, the committee is given the responsibility of adjusting interest rates in
order to meet the inflation target set by the Chancellor. (related article here)

In December 2003 the National Statistician
decided that the UK version of the HICP would be renamed the Consumer Prices Index (CPI) and the UK
inflation target would in future be based on the HICP, replacing the Retail Prices Index excluding mortgage
interest payments (RPIX).

The difference between the RPI(X) and the CPI
is a bit complex and out of the topic
of this article, where I will consider the CPI as the most important data,
since it is the BOE’s inflation target and also for length purposes.

Actually the CPI tracks the changing cost of a
fixed basket of goods, and is produced by combining approximately 180,000 price
quotes for over 650 representative items. Here below I attached an extracted
image from the “detailed reference table”
found in the ONS website, where we see the weighting of each category in
the CPI calculation.

The ONS releases the CPI data every month,
about 15 days after the end of the month, and what we find in the Economic
Calendars, is the % change in a ‘year-to-year’
base. So, in May 2012 we see the % change in CPI numbers, related to May 2011
ones.

Understanding the trend in UK inflation, together
with other economic data that I will show in next articles, is very important
when comes to trade the British Pound
(GBP), because the BOE could decide the introduction of some measures to give
stimulus (or not) in the economy, reflecting strength or weakness in the
currency against other majors.

Here below is the chart showing CPI annual
change, starting from January 2010 to last release in May 2012. 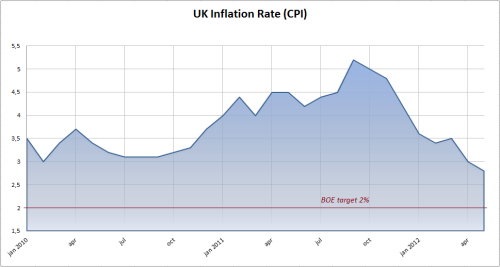 As we can see, starting from Q4 in 2011, the annual
change in CPI came back down from the 5,2% to the 2,8% in May 2012. One factor
is accounted by the decrease in energy prices, after the fast rise in previous
months: ‘Housing electricity, gas &
other fuels’ and ‘Transports’ are
indeed very important in the CPI calculations (picture 1). Another important factor is related to the increase in
VAT (picture 3-b): it is estimated
that about half of increase in VAT on January 2010 was passed into consumer
prices by the end of 2010 Q1, and after the increase in January 2011 another 1%
was passed by end of Q1 for about three quarters. The impact of the VAT
increase to the CPI % change, as seen in picture
3 below, is an estimated data. 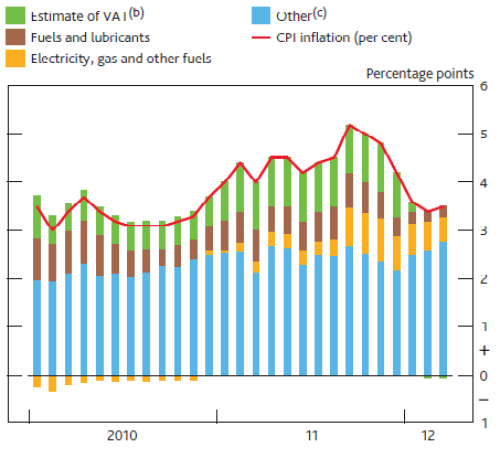 An important note is about the 2% target (picture 2): the Committee’s best
collective judgment is that inflation is more likely to remain above the target
than below it in the near term (picture
4). In May 2012,  the MPC decided to
maintain Bank Rate at 0,5% and the size of the asset purchase programme at £325
billion which was increased later in June by more £50 billion. 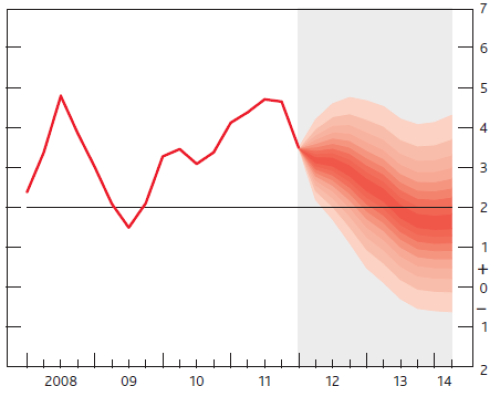 There are many reasons involved in the increase
of asset purchases. The decrease in recent CPI % change (picture 2) looks faster than what MPC expected in previous months
and in my opinion the BOE is trying
to give more stimulus to UK economy. (UK
asset purchases will be topic of next article)

Knowing the importance of the CPI release, is
very important to understand what could happen if numbers come out in a
direction or in the other: somewhere is written that an higher CPI should give bullish pressure to the
currency and opposite a bearish pressure if lower.

Forget about trading during news, or at least forget
that green means up and red means down. I really don’t know who wrote this
thing first, but one day I will discover and ask him/her back all the money I lost
in the past.

CPI release is to be considered in the long term view, and more likely a confirmation in the overall scenario
than the real trigger for a move.

I hope that this article will be helpful to clarify
the complexity of factors involved in every single news release.

Good luck in your trading.