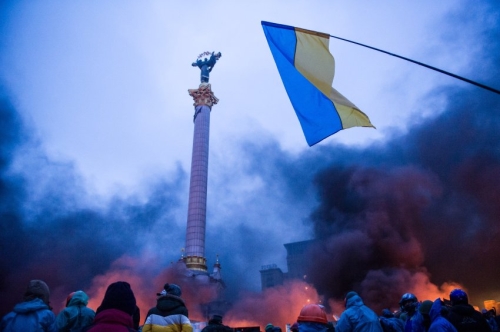 Ukraine crisis and what does it means to the market, if you wish you can read my blog post here: Olympics and Stock Market Correlation. Cycle of War


I've also draw a parallel between: "1980 Moscow Olympic game, Russia invaded Afghanistan. 2014 Sochi Olympic game, Ukraine next? I seepatterns everywhere" I have to say that I'm just amazed by the accuracy of my prediction and how things have unfolded.

Also another remark was that we have to keep an eye over the currency market as this geopolitical event will trigger massive outflows from Ukraine’s currency Hryvnia, and since than we hit historic new lows almost each day as the Hryvnia was in a free fall (see Figure 1).

Another remark I've made was about what tactics Russia will engage in:"It seems Russia has learned from the 1980's boycott and that's the reason why they didn't demand action in Ukraine before the Olympics." basically I was saying that any Russian intervention will only take place after the Olympics. I'll have to say again that I'm very impress by the accuracy of my predictions and my thinking. I've always considered myself as an independent thinker which tries to challenge the conventional way of thinking. Thinking outside the box especially when it comes to trading is key for survival. 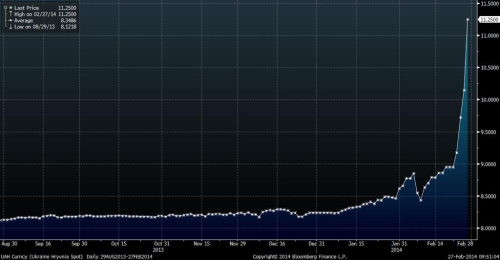 History is the answer to our question, and the history of the stock market suggest that there are no empirical evidence to show that war creates a major decline in the stock market thus the idea that Wars are being bearish for the market is wrong. Lets take for example the 1991 Gulf War and the Market reaction at that time (see Figure 2). The assumption that people will sell stock during wars and buy government bonds as a safe haven, is flawed. And especially during this days when confidence in government is collapsing, corporate bonds are more attractive than government bonds.

This doesn't mean that War is bullish for the market either, actually statistically speaking during the initial stage of war the market doesn't perform that well. During the World War I capital flow into US but unfortunately the exchange was closed shortly after the beginning of World War I. In Figure 3 we can have a look in much more detailed picture between Wars and the Stock market correlation, there is mixed results but we can say that war doesn't creates any major decline in the stock market. 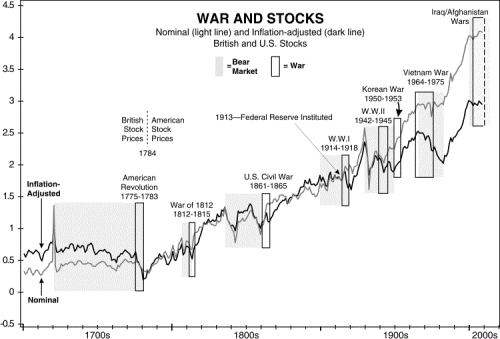 In this paragraph we're going to take an inquisitive look over the gold market and the relationship with war. Last month I've made a remark that recent developments in Ukraine and the possibility to see Russian intervention can be a catalyst for the gold to spike even higher. And at the same time we will see the dollar rallying with gold, which is unusual as they usually move in opposite directions, but with the safe haven status of dollar triggered this can be possible.

History can be our guide in forecasting futures trends in gold market as well, and I want to bring to your attention how one event can cause two opposite results: One the one hand we have the Russia invasion of Georgia, 8th August 2008, after the South Ossetia attack gold went down -12.47%, and on the other hand we have Russia invasion of Afghanistan 24 December 1979, Gold spikes up to record level almost doubling in value (see Figure 4). Now the question is why on the same event risk we had to opposite reactions, the answer is you must understand the cycle we're in.

The current geopolitical uncertainty in Ukraine and the likelihood of Russia to take back some regions from Ukraine, which historically have been part of Russia, like Crimea can trigger the possibility of Ukraine to break apart, which can be very bullish for the gold market, and see the same type of action like we have seen with the Russia invasion of Afghanistan, which suggest that after the rally is over the market can roll back, but let the market dictate the action and don't try to force it with your bias.

With the uprising tension in Ukraine and because we are in facto in a war the market action may be disrupted by the events developing right now in Ukraine. If the market will get very sensitive to this geopolitical event we can see massive capital inflows into the save haven instruments like USD,CHF,JPY and Gold which is ultimately the hedge against government not inflation as I've been demonstrating previously.

I'll be going to focus more on the YEN pairs and CHF pairs as I think those pairs are going to benefit the most on this save haven capital flow. Possible scenario on $USD/JPY and YEN crosses is to see first a big sell of in the coming days and than a quick
recovery as the high volatility will hit the market and in the end the bullish xxx/jpy will prevail. In Figure 5 you can see one possible trading scenario which suggest in the first stage we should see risk aversion to kick in and send USD/JPY and yen crosses down as the save have status of yen is triggered and later we should see a quick recovery after the events calms down as peoples pull back from this trades creating in the next phase a strong rally much more bigger than the sell of.

In the end of my preview blog post about Ukraine crisis I've left a rhetorical question unanswered and I'm quoting me here: "Is this the return of the Cold War? That remains to be seen." now I have the answer to this question: YES, Cold war is back!!! make no mistake about it.