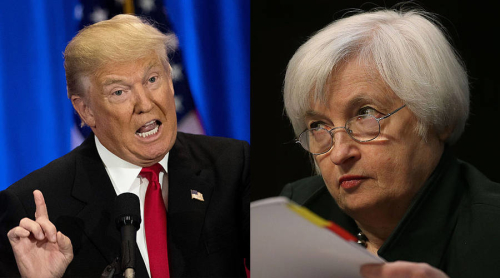 Trump: as expected before the election results, almost analysts were suggesting a massive drop of the USD once Trump is elected to be USA president.. that's what makes many traders think that Clinton will be for sure the new elected president in the economic point of view. Mmm in the Election Day's few 1st hours, an uncertainty have been shown in the start of viewing the results , about +- 300 pipes were up and down in an unknown market movement, till California result which confirmed the debate . Trump is the President!

A massive moving up have been done which reflected a good healthy indicator for an understanding of Trump economic agenda.. although all reports about racism, Mexico , Russia, Arab and Muslims were confirming an instability of the economic status, means only one thing!! It is just misunderstanding to Trump.

Few days later, Yellen came with the interest rates decision to fire up the USD with an interesting plan for 2017 also..

Then yesterday was the 1st test to USD with Trump, by the 1st speech the USD has been injured on heart with an increase in market fearing and demotivation.

Now, the question is: will Trump continue shooting the USD down or Yellen will help USD to keep the motivation up?