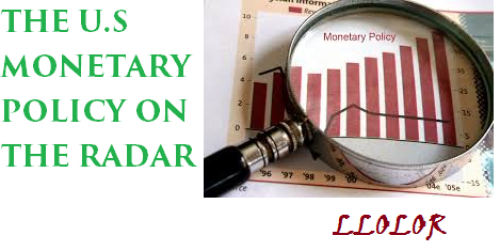 
In 2015, the divergence in monetary policy among the world's central banks is expected to be a key theme. For now, the scorecard seems to be tilted toward monetary easing. In January 2015, fourteen central banks engaged in some form of monetary policy loosening, generally in the form of interest rate cuts or asset purchases. 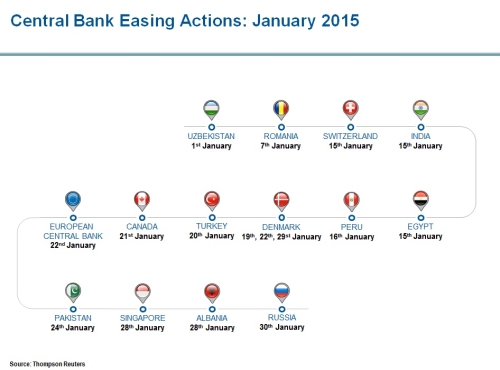 Some of actions included Denmark's central bank aggressive slashing of interest rates four times in a three-week period and the European Central Bank (ECB) announced plans to step up its quantitative easing. Canada cut the benchmark interest by 25 basis points to 0.75% whilst the Reserve bank of Australia RBA followed with a similar 25 basis point cut to 2.25% in its February 2015 meeting.

Having witnessed all the action from across the globe the investing public anxiously awaits the next move from the US Federal Reserve (Fed), having ended the quantitative easing program in October 2014. This article looks at the state of monetary policy in the United States.


Having announced the end on the quantitative easing program, the Fed statement on monetary policy from the 28 of January 2015 had a lot of material changes in wording from the December statement. Some of the key points
were:


On the 24th of February 2015 the Fed chair, Janet Yallen appeared before the senate where she made interesting remarks on monetary policy:
This means the consideration of an increase in the target range for the federal funds rate will depend on the available economic data on a meeting-by-meeting basis. Table 1 below shows the 2015 FOMC meeting calendar.

The meeting on 18 March 2015, will offer more guidance on the monetary policy direction as it will be followed by a press conference and summary of economic projections. 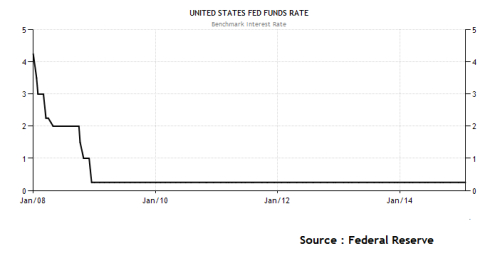 
In September 2014, the FOMC issued its statement on Policy Normalization Principles and Plans. This statement provided information about the Committee's likely approach to raising short-term interest rates and reducing the Federal Reserve's securities holdings.

In the testimony the Fed chair highlighted that FOMC intends to adjust the stance of monetary policy during normalization primarily by changing its target range for the federal funds rate and not by actively managing the Fed's balance sheet. The primary means of raising the federal funds rate will be to increase the rate of interest paid on excess reserves, use an overnight reverse repurchase agreement facility and other supplementary tools as needed to help control the federal funds rate. The supplementary tools will then be phased out as the economic and financial conditions evolve. On the securities holdings, the FOMC intends to reduce its securities holdings in a gradual and predictable manner primarily by ceasing to reinvest repayments of principal from securities held by the Federal Reserve.

The path to policy normalization has been set out and the course of action drawn and now awaits implementation. The implementation will depend on the economic and financial data. Some of the key data likely to trigger implementation is discussed below.


Fig 3 below shows the inflation story in the US from February 2014.

The inflation dropped 0.1% January 2015, the lowest rate since late 2009 and on a monthly basis, prices went down 0.7% due to falling energy cost. The core inflation which tracks changes in prices that consumers pay for a basket of goods which excludes some volatile price items like food and energy prices was unchanged at 1.6% in January.

With inflation in negative territory it is a huge divergence from the Fed’s target of 2%. Before beginning the rate hike the Fed has to be reasonably confident that over the medium term, inflation will move up toward its 2% objective. In the short term the inflation is likely to remain depressed due to the low oil prices but firming core inflation may be a signal that there is scope to revert to the 2% target in the medium term if the volatility in the food and energy prices is addressed.


The labour market in the US has been showing tremendous signs of improving over the past 12 months. Fig 4 shows the Non-farm payroll data and the US unemployment rate. 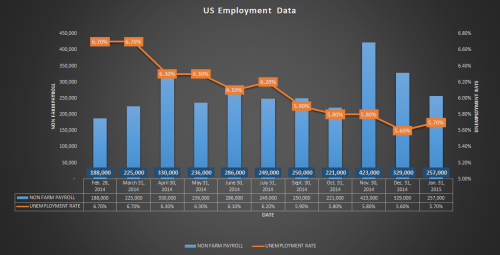 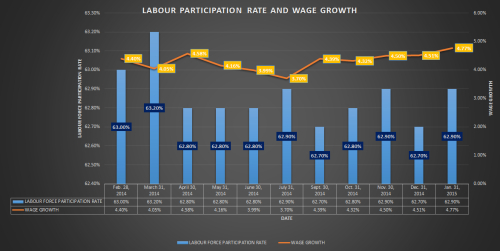 Whilst the consensus among analysts is that the gains in the labour market will remain solid, it will be improvement in the participation rate and wage growth that will likely trigger action.


Fig 6 shows the GDP growth rates for the US in the past few years. 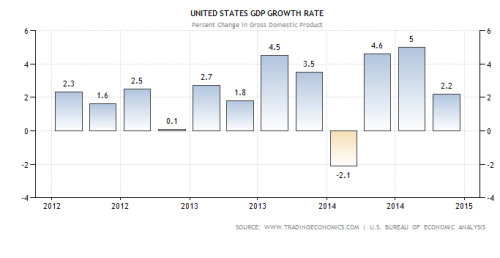 After falling by 2.1% in the first quarter of 2014, the US economy recovered to register strong growth in the remaining three quarters of 2014. Real gross domestic product (GDP) is estimated to have increased at a 3.75% annual rate during the second half of 2014.

The GDP growth is expected to be strong enough to result in a further gradual decline in the unemployment rate. Consumer spending has been lifted by the improvement in the labour market as well as by the increase in household purchasing power resulting from the sharp drop in oil prices. A continued improvement in the U.S. economy and the U.S. economic outlook may give the Fed confidence to increase rates.


The continuation of the low interest rate regime will have a detrimental effect on savers as inflation is running way above the interest rate. However the Fed has to play a delicate balancing act as raising the interest rates too soon may reverse the gains achieved so far.

While inflation is expected to remain low in the short term due to the low oil prices, the core inflation may provide the vital signs on whether inflation is likely to revert to the 2% target in the medium term.

The housing and construction markets will also be key in the timing of the interest rate rise. The housing construction activity should reach levels that could be supported in the longer run by population growth and the likely rate of household formation. However these levels will be difficult to judge but continual improvement in housing statistics will be key.

With most central banks engaged in monetary loosening, the increase in interest rate will widen the gulf in the divergent monetary policies. This may trigger asset flows into the US in search of higher interest rates. The US dollar should be expected to strengthen further against most of these currencies once the monetary policy begins to tighten.
Translate to English Show original Toggle Dropdown