Community
Article contest
Trading Elliot Waves with Emas.
In this article we will be discussing the profit making using EMAs on Elliot waves. Most of us are familiar with EMAs but fewer people try to use it with Elliot waves as recognizing the phases of Elliot waves is considered a tedious task. Here I'll try to make it as easy as possible using the 1-2-3-4-5 cycle approach.

Now this is something which is quite well known but what is never known is when the first leg of Elliott is likely to begin. This is where most of us get frustrated and give up on using the Elliott wave principle. So I worked on it for quite a few days to figure out a best possible use of this well know principle. This article is not about the explaining the Elliott wave theory which is already freely available using google but rather it's a perspective of a active trader who feels that this tool of Elliott waves can help us improve our probability of profiting by using it in conjunction of our existing trade set up. I mostly trade using basic EMA combination of 10 and 20 to keep the things simple while providing me with the idea of trend of underlying instrument. However, with EMAs you can't judge how much the market has run up and how much steam is still left there. In situations like this the Elliott wave theory comes handy.

Application of Elliot Wave cycle
It's a well know fact that identifying the wave 1 of Elliot wave cycle is a rather subjective part as you can almost consider any point to be the beginning. Now this difficulty can be overcome in few ways. Like if we use any other indicator of our choice for the confirmation of beginning of new trend. Or else we can consider the relatively longer time frame Elliott wave cycle phases compared to the time frame on which we are looking to take a trade. If this things don't work out we can simply give up trying to identify wave 1 of Elliot wave cycle and I can convincingly say it won't make much difference to our profitability as the best part to enter into a trade is either wave 3 or wave 5. So in my system I don't try to identify wave 1.

The Elliott wave theory says that corrective wave 2 should not retrace more than wave 1 so this make our job of identifying wave 3 much easier. In the examples that I am providing to illustrate my point you will see that I am using Elliott wave cycle on four hourly charts while using EMA 10 and EMA 20 combination on one hourly chart.

To make sure that I am speaking from experience rather than just empty talk I am including two trades taken during Trader contest March 2018 in which I had used the combination of Elliott Waves and EMAs. 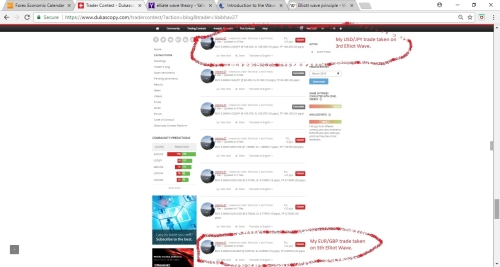 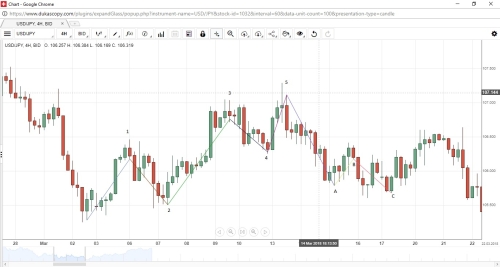 In this USD/JPY trade I remained on the sidelines till wave 1 and wave 2 was complete. As I had said earlier there was no way I would have been sure about the wave 1 as USD/JPY was in downtrend prior to wave 1. So it could have been a correction as well. Just to make sure that the trend has turned I waited for the wave 3 to begin. 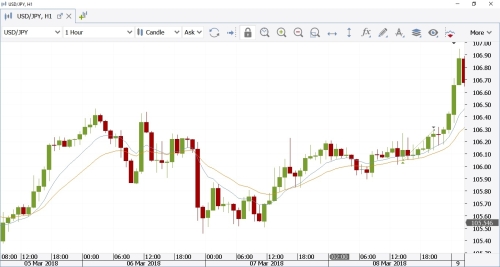 For the confirmation I have used the EMA 10 and EMA 20 crossover on hourly chart. As they crossed into a bullish mode and sustained the momentum for a considerable time, a clearer picture emerged that the wave 3 has began and USD/JPY is likely to trade upwards. Once the desired conditions were in place I just put on a trade and profited from it. 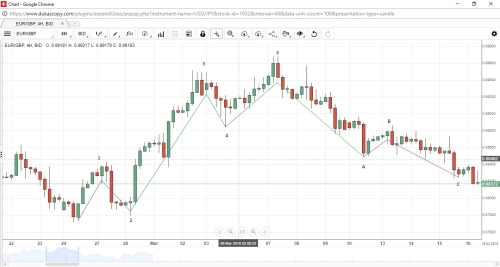 In this EUR/GBP set up the the wave 3 run up has been long and swift. However, given the limitation due to the difficulty in identifying the wave 1 and subsequent wait required for the confirmation of beginning of wave 3; I didn't profit from such a good move. Here I thought it's better to wait for the wave 5 to take the trade. In this example I am also including the guidelines of taking a trade using Elliott wave cycle.

Elliott wave guidelines are general situational analysis advisories and are not hard and fast rules. It means these guidelines may or may not hold in all the Elliott wave sequences.
Guideline of Equality: Two impulse waves out of 5 wave Elliot sequence are likely to be of same size.

Now keeping this guidelines in mind we will consider the EUR/GBP trade situation. 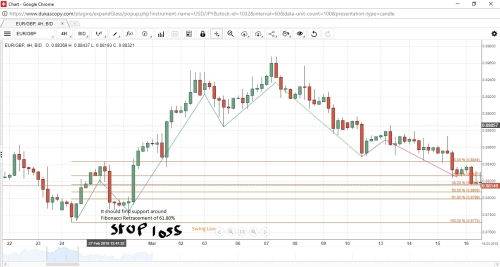 Here the EUR/GBP wave 2 correction was sharp and it just turned around from the levels near the recent swing low. Now if anyone was to take a trade after the beginning of wave 3 the natural stop loss would have worked out to be the end of wave 2. However, as I have said earlier I just didn't get the opportunity for entry during the wave 3 see I'll move on to wave 5. 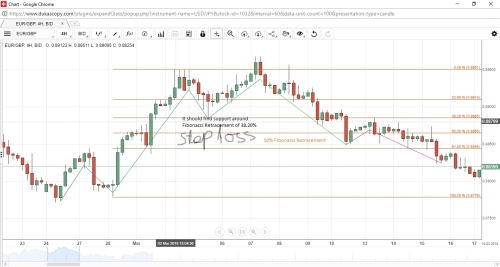 Here, we can observe the Elliott wave guideline of depth of corrective waves. As the wave 2 correction was sharp I was expecting the wave 4 correction to be of sideways nature. Thankfully it worked just that way.

Once I saw the EMA 10 and 20 bullish crossover was in place I decided to take the buy trade in EUR/GBP on Elliott wave 5 considering that the wave 5 was likely to be of the same size as wave 1.

This is the trade set up of using Elliott wave cycle with EMAs I stick to most of the time. It has worked well for me keeping the losses limited and opening up the possibility of profiting more than the risk taken. I hope you would find my humble efforts worthwhile for giving a thought to it. Any suggestions for further improvement are always welcome.

I Wish a Profitable trading to all the Dukascopy community traders.
Translate to English Show original Toggle Dropdown