Communauté
Concours d'articles
Traders Vs Robots
Fellow Traders,
In this article I will try to do a review of the past year in the context of both competitions conducted by Dukascopy, namely Traders and Strategy. Can we ultimately determine which is better, traders who trade by hands every day, or robots that never sleeps? Can we trust a robot to trade for us?
Here are the statistics from the past year. In the following two tables I used data from the site of Dukascopy, in the first ranking is based on the rules of Dukascopy, while ranking second table is tied on who has the highest income for the period.

Well, at least in my opinion, and according to what is seen from the table, the winners are Traders. These statistics fully coincides with my opinion, which is that there is no way a robot or strategy, as well as be described, to be better than a well-functioning trader. Although as I suppose many other colleagues use modern technical means, namely automating some signals and support from so-called robots, we still trade "by hand" so to speak. Personally, I love to trade and I like to do it. I would not exchange this pleasure, giving it to the auto robot. However, I do not mind some of the capital to be managed by a robot.
Something that strikes in the table is Dieselfx which appears as a winner in both categories Traders and Strategy Contests. Apparently, the strategy that he uses, worth to pay attention and will do this soon
So, it is clear that a trader can see and assess much more than a robot, and consequently have a great success. The only thing which a robot can boast are emotions that are absent in him. But I think this feature is only for novice traders. An advanced and experienced traders with good knowledge and strategies implemented a strict management should not have to put emotion into their work, and strictly follow his plan. Even when the market goes against him (if it does allow it), he can always apply more techniques such as diversification, hedging, and many other tactics to protect from losses than a robot which generally rely on StopLoss.

But I will not talk more about the styles and techniques that trades use, and will focus more on the robots. Let's see how they have presented themselves in 2012, what strategies are used:

One of the things I love most of Strategy Contest of Dukascopy, is that it is an open competition, ie anyone who is interested can review and test the code on a strategy. This sharing of knowledge and experience for me is vеry useful.

So in the above table clearly shows who, what pair is chosen and a brief description of strategy. Since I will not have the opportunity in this article to discuss in detail all strategies, I will focus only on two of them. It is that of Dieselfx and BigBoss6969. Why them, you will know soon. As seen from the table, the most - traded pair is EUR/USD, which is not so surprising. EUR/JPY is also one of the favorite. Strategies in general, I can say that almost all of them use standard indicators, and very few are based on a mathematical expectation, or as they are called, neural networks (exist).

Naturally the МА ( Moving Average ) and all its variations - SMA EMA DEMA and many others, is the most used indicator. This is really one of the main indicators used, can be said of all. It is followed by RSI, Bbands, Atr, and others. Very little information i will give you to these indicators, as I guess we all know them well.

Developed and introduced by J. Wells Wilder in his 1978 book, "New Concepts in Technical Trading Systems".

The ATR is a measure of a trading instrument's volatility. It measures the degree of price movement, not the direction or duration of the price movement.

- To provide a relative definitio on high and low
- To identify periods of high and low volatility
- To identifi periods when proces are at extreme levels
We will now look at these 2 strategies that I think are interesting.
The first is Dieselfx and is based on BBands and SMA. I chose it for 2 reasons :
1. because it is an interesting strategy and is very easy to implement ;
2. because Dieselfx was a winner in both competitions.
I guess he used the same strategy in both competitions (оnly he can say is that so) and if it really is , then it is worth learning more about strategy.
Here's what is strategy itself:
1. Bbands 30, DEMA, 0.8 0.8
2. SMA 55
if (openPrice <bands[upper] AND bidPrice> bands [upper] AND bidPrice> sma55) ==> BUY
if (openPrice> bands [lower] && bidPrice <bands [lower] && bidPrice <sma55) ==> SELL
TakeProfit level = 25 pip
StopLoss level = 128 pip 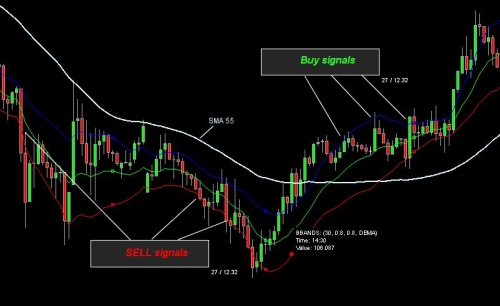 As we see it really is a sensible strategy that anyone can easily use in their daily trading.
But there is one very important thing missing not only in this strategy - position management.
Since this is a fairly complex topic, I will comment on only if there is interest on your part. I can only say that this defect occurs in most strategies involved.
The second strategy that is much interesting and "complex" to understand at first glance is that of BigBoss6969.
I just want to mention in advance that I really really do not know who wrote this strategy, not to offend in any way BigBoss6969. This strategy was used most (copied) from other players and occupy an enviable place in the charts, with only minor cosmetic changes to it, as a TakeProfit or StopLoss.
I also want to thank the creator and - whoever he is - because it is really a very good strategy, unfortunately, remained underdeveloped in the form in which it now has.
Let's look at it closely. After the first reading of the code, strategy sounds very strange and confusing, as they written over the sample code and replaced some lines. Apparently writing in JAVA e quite difficult for many of us, who want to try out their own strategies. I really do not know if it belongs here, but Dukascopy jForex platform allows us to make baktest strategies on real data, which is a really big advantage.
To get an idea of ​​how truly effective strategies is, I need to program an indicator, by which to visualize the strategy itself and easy to understand. As yet proficient in java to my regret, I did a mql.
Here is what actually makes the strategy:
Used only one indicator ATR 13
We take the value of ATR 5 bars prior to the current.
Get the value of previous bar green or red ( green Close-Open > 0 or Open -Close > 0)
base = 0.26 - parameter which the author has seen as constant and none dared to changes in their attempts to use the strategy.
If we have green bar (close - open >0) and the value > ATR ==> BUY
if we have red bar (open - close > 0) and the value > ATR ==> SELL 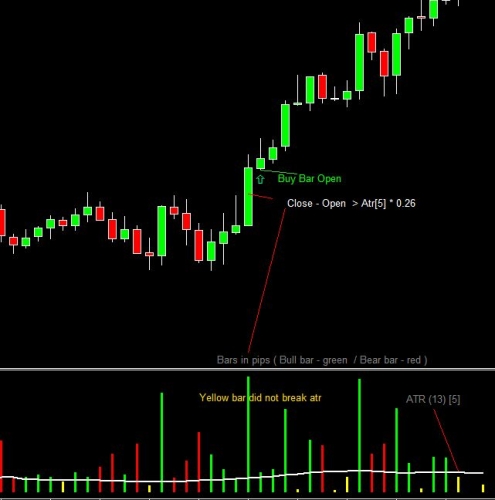 On the image above ATR 13 is calculated based on a 0.26(base) and it is clear that almost all the bars meet the requirement to open a position. The following graphics have caused transactions concluded the first half of December by Dani11 that uses this strategy, is bet on EUR/JPY, 5 min Chatr TakeProfit = 15, StopLoss = 300. Just a huge stop using from Dani11 keep the strategy run.
The next picture I caused some of the transactions concluded by Dani11 in the first half of December: 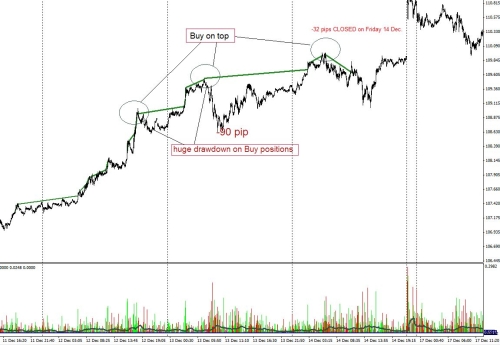 Here's another picture where you see the detail immediately after the close of a transaction is opened next. At each closing 5 min bar is a deal. 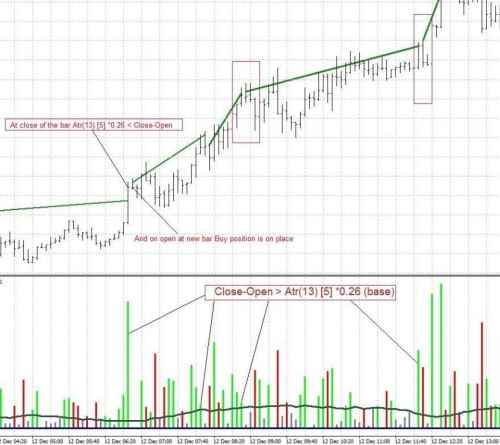 The success of this strategy partly due to the large StopLoss on one side and the other small TakeProfit. As for the continuous detection of the strategy deals - this is due not only from detecting the condition, and a poorly written code.
Unfortunately, I could not finish the article because of exceeding the limit of 1500 words.
In conclusion I can only say that this strategy is indeed an excellent idea, which unfortunately is very poorly written.
I will continue next week.
I wish you all good health and happiness.
Traduire en Anglais Montrez l'original Toggle Dropdown