Community
Article contest
Trade Management for Long Term Success
Today, I would like to share one of the trade management strategies which I like most. I have been testing this management quite a long time and in my opinion is one of the most powerful tools in trading. Trade management as a part of the risk management is highly related with trading style and ability to hold good decisions in various time frames. This setup is highly recommended for long term traders or investors but in fact, there is no limitation to use it even during the high volatile days at single trading session.

Small curiosity – Many of huge institutional futures traders with lot of money and thousands of lots in positions trades the same way especially during the trading sessions with clear direction. In fact, there is causality between their trades and direction of the day, because they are key market movers. You can see it in a Depth of market (DOM) if you are familiar with reading of orderflow. So let’s take a look what this is all about.

Same picture for all of us

Let’s say that we have a guy who strongly believes that AUDNZD rate has a huge potential to rise. It is a beginning of the year and our guy sees picture like this front of him. 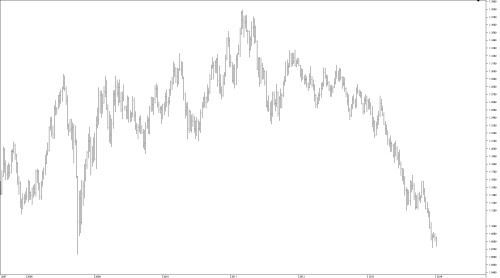 No matter what analysis he chooses. He has a reason and he definitely wants to buy as low as possible and as many as he can. The problem is that he don’t know where the bottom going to be. Nobody knows. All the guys are watching on the same picture. What they see? 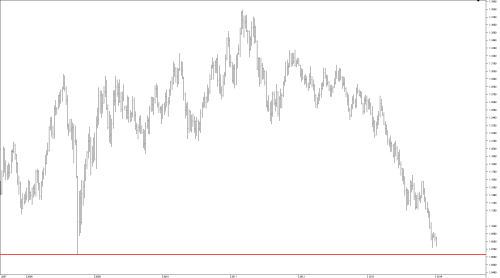 They see this red line. Nobody wants to be a first fool in long because there is a high probability that we are going to test a low from 2008. The rejections of this new low should be a first indicator of rate recovery. This happened few days ago. 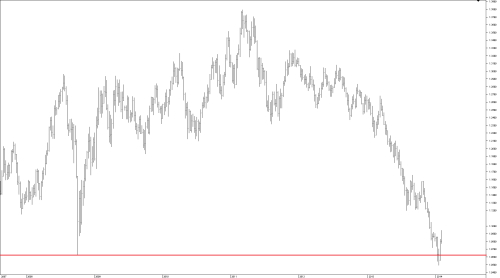 First of all I would like to mention, that setup I want to show you is not a simple „all in all out“(AIAO) strategy. There is no SL or PT and nothing between, because in AIAO there is nothing to be managed. If you have just single position then you have just two options. You can get your target or loss and that’s it. What I want to show you is concept of collecting and cutting of exposure in right direction of market.

All the big guys want to get best possible price. So they try to buy at lowest levels and then they want to see what the market respond is. They can support they orders from lows with additional positions later on but first of all they want to be sure that market response is huge and lot of other guys wants to buy.

Even if they see that lot of other guys want to go in same side, they start to sell against them. Why? Because Gordon said „greed is good”. They don’t have massive amount of money in right side. They want to collect much more and that’s the reason for selling exactly on the first possible resistance or bit higher. Holding the market for a few hours may other players think that actual low was not a lowest one. Then we can see a free fall again. But now is not deep as a last one and it is better to think how huge the first market response really was. Let’s see a picture in detailed view. 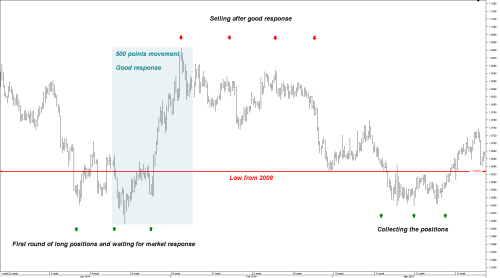 Big players will do the same thing over and over again and sometimes can take a months to collect really serious exposure. Key point is that they are buying more on the lower support levels than they selling on the higher resistance. Idea of this trade management is simple. Big guys want to save as much money in the for next round of game.If they are selling then only for one reason in this case.They want to make market look weak to get better price for their long positions.

Just take a look at the chart below. This is an example how they may think. The poker game full of bluffing more than six months. If you did not know the concept of collecting and cutting, then you are ready to give up in few weeks. In case of following technical analysis most unluckily with breakout entry strategies, just in few days. This is a big game and those guys are not going to change their behavior.Remember that many of big players are in positions all the time and if they decide to make a huge market move, be sure they have massive amount of positions in the book collected from previous fluctuation. Once this happens they will not cut their exposure very quickly. They think exactly opposite way. It is a right time to push the market in their direction. 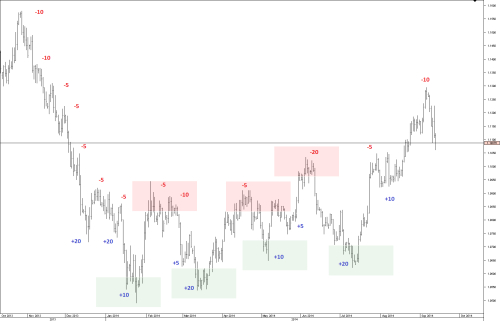 1. If you are a big trader and you want to trade huge position in one direction you can not just simply send an order to market because your order may cause a huge market reaction and you will not get a good price due lack of liquidity.

2. Big guys don't want to show trading decisions to other traders. They wants to be hidden till time when they have enough exposure in the book.

3. Once is collecting procedure done, they may show a trading activity to others by unhidden orders to support their actual collected position. This action happens just because they want others to join to same side and affects market movement. Then you can see liquidity gap right in the chart.

Rules of collecting and cutting.

1. Always use positive averaging of your positions. Remember that you should start with a very small positions in the beginning. If you make a mistake, your loss can be lot of basis points, but just with very small exposure. If you are right, then you can collect 5-6 times higher exposure in good direction and huge market movement can give you a jackpot.

2. Think the same way as pros do. If you see good market reaction, you can add another position on the lower level, but not be aware of support/resistance levels where big guys wants to buy or sell just to get a better price.

3. If you already have an overexposure and market is against you, don't hesitate to cut part of it or all of it. Its better to be flat and wait than finish in a huge loss.

4. Never use a negative averaging. Really. Negative averaging is a massive account killer. You never know whats going to happened next day. If you are not sure about direction of the market. Its better to be in one small position or flat.

5. Look at the market in big time frame not just a days. In this case your runners may deliver higher profits.

Well, this is probably one of the hardest think. Forex market is just an OTC and no one is able to see all orders. My opinion is based on experience from exchange traded products so I see this activity every day. I can not make you believe but if you want I can show you my 4 months record of Live trading by following approximately same concept. This is not a powerful evidence but I hope as an example is enough.

What a small player by following a strategy of big players can do? AUDNZD example.

Collecting and cutting - first round 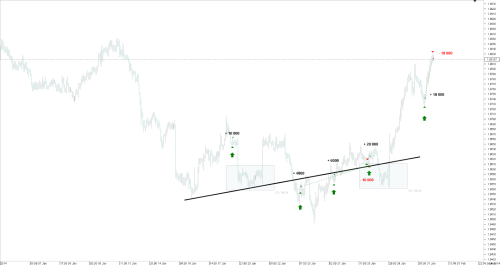 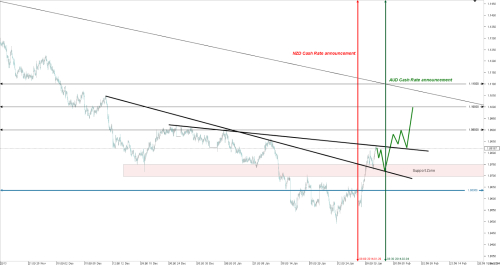 Collecting and cutting – continuation of first round 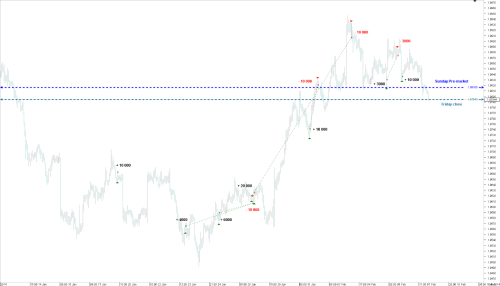 Collecting and cutting – second round

That is an example of first two rounds. I don't have a print screens of all rounds of the AUDNZD trades but what I have is a statement of all trades. I have been using this concept of trade management for 4 months of trading and this is a result of my effort.

Some of you may think stats above look like a fake. Well, they look somehow. Trades are real but these stats are from Close trade Equity. I am no able to show you stats from open trade equity today. What I can tell is that my equity didn't cross Drawdown approximately 1000$. Some of the positions were merged and closed on break even because I don’t like to see negative trades in my statements.

Anyways. This article is not about showing a track record with 98% win ratio. This article shows a way how to think as a big player even if you are small.