Community
Article contest
Top of 7 Events of July
It proceeds not to remember such hot summer long ago (the past, the right was similar, but .. )and! We consider a top of 7 events of July, we try to understand what expects us in August, and a lot of things seem: while wrote article the fresh data Non-Farm and decisions on an interest rate of RBA have been published. Bank of England! The bank of England sat on August 4, on Thursday!

Last week of the seventh month

RBA after the publication of inflation

The rate of inflation remains the same for the weighed indicator: 1,7% against 1,5% forecast for annual size. Standard CPI at the level of 1,0% against forecast 1,1% and the previous 1,3% for annual value. Well it or is bad before RBA meeting?

From the point of view of news trade – it is good as in transparent calculation "inflation is lower, the probability of decrease in a rate is higher" turbidity is brought. Citi, for example, has reviewed the forecasts of change of a rate of RBA since August for November.

We saw the prevailing majority of forecasts for a meeting on August 2:-0,25% of a rate (from 1,75% to 1,5%). Change of inflation expectations gradually prevented forming of uniform forecasts that has resulted in their inconsistency and the increased probability of volatility at the time of a meeting of Bank.

Martin Weale was given before a meeting

Martin Weale which doubted the relation of additional mitigation of monetary policy of Bank of England has changed the image after the publication of pessimistic PMI indicators of the production and serving sectors. Now and it for decrease: "the pack of pigeons" was replenished with his person.

The benefit I have OH pronounced a sentence on an interest rate on Thursday – enough for the markets of courtings.

Bank of Japan: I twist, I want to confuse

Interesting and epic market behavior on USDJPY in the morning on Wednesday (on July 27).

There is a message on Abe's performance, the markets plan to obtain information on additional stimulation of the Japanese economy.

Abe upon will present a stimulation package next week (from the government of Japan). 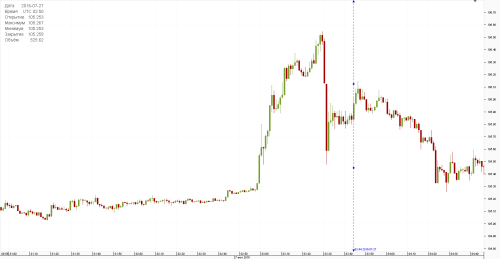 As a result, the Bank of Japan (at the head of Kurod), as always all was parted, and on the taken measures, and for publication time: measures of mitigation are taken insignificant by estimates of the market. An interest rate without changes. Market expectations are not met. 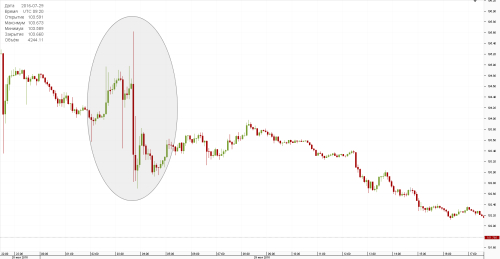 FOMC is expected left an interest rate at the level of 0,5% for the upper range. And, if until the publication that it is more important protocols, than the decision (as in them there shall be a revaluation of indicators of the labor market), then and has happened: the Committee has estimated the labor market in dynamics and is positive. There are traditional notes on the inflation lacking to the targeted level of Fedrez. Economic prospects are designated by optimism. FRS will continue to watch global variables.

Friday data on GDP surplus for the second quarter, have probably removed expectations of growth of a rate further as the fact was significantly lower than forecast expectations: 1,2% instead of 2,5%. variables.

We will try not to forget, than for us July was especially important.

7. Deception of bank of Japan

Two last weeks of month, Japan promised to dump "money from the helicopter", but upon, it has not occurred. The interest rate and the QE program were left without changes. The regulator used only minor methods of stimulation, as has disappointed the markets.

By the way, about Brexit – such act, one more hint on a post factum of a global event, can be so bad not everything, and can be just all want to pass the British Queen forward (a thick hint on first priority of actions of Bank of England which have not taken place yet).

S&P and Fitch have lowered country ratings with "AAA" to "AA". Moody's have only revised the forecast with "stable" for "negative". (this event in a rating purposely though upon, it has taken place at the end of June, but influence more in July, it was transitional week).

5. On the planned publication PMI of indicators from Markit

Markit was caused to the aid of the markets in the form of the conductor as the way after Brexit was rather foggy and uncertain, and especially, for business of moods.

IHS Markit has gone to a meeting with rather extraordinary step: data of key PMI indicators: Manufacturing, Construction and Service have been published ahead of schedule out of the schedule. Data for formation of an index were used on the basis of 70% of completeness of poll of respondents.

4. The bank of England ​ has held the first meeting after Brexit

Having gathered for the first time after Brexit, the Bank has confirmed, Mark Carney's statements which are earlier taken out on public: to decrease to an interest rate in August to be. The interest rate contrary to confusion to expectations, in July, has been kept.

Theresa May is appointed the new prime minister of Great Britain on July 13. Earlier it was supposed that we will see the new head of the country in September, but probably under pressure of a situation the issue was resolved much quicker.

This factor can't but please as hints at continuation of fast dynamics of the events.

If in June the markets had a shock from the May data Non-Farm Employment Change (38K of a surplus against forecast 159K), then the fresh data NFP were already a god-send: 287K contrary to expectations 175K. This fact has twice entered releases of protocols of FRS and has returned to expectations hope for increase of an interest rate of FRS this year.

1. The Bank of New Zealand publishes the unplanned report of economic forecasts

The reserve bank of New Zealand in the unplanned updating of the economic prospects published in July comes to a conclusion that further mitigation of monetary policy is quite possibly required. The markets assume that at the beginning of August the interest rate of Bank will be lowered from 2,25% to 2,00%.
Translate to English Show original Toggle Dropdown