Community
Article contest
Time to Review Strategy Contest!!
Yes, it is true, for those who do not know or do not remember the Strategy Contest makes this April Three Years, since its first edition was launched, in 2010.
In May 2012 I wrote an article about the Second Birthday of the competition and after a year I am back with the same theme as I think there is a need to do something to restore the credibility of the contest as well as the motivation of contestants.
The Strategy Contest has always been somewhat controversial as to compliance with the rules by the participants, which further implies in the final results. As in last months, this contest has again been the subject of debate in our Community Forum, my purpose is to bring an article to debate this matter further so we can definitely have a fair contest according to the rules. The problem here are not just participants that break some rules, but we also have to put some weight on the Dukascopy Team for not enforcing the rules strictly. The issue of non-compliance with the rules is not a new issue regarding this contest, perhaps because the rules are far from be the best, perhaps because some participants do not worry whatsoever fulfill them or simply because Dukascopy forgotten how should enforce them.
The 3 images below were the reason why I decided to finally write this article, although it has cost me much because it is a little touchy. But what gave me the click was when the member Drishti wrote: "Participant Told That strategy is based on Moving Average, and after looking at code of participant strategy, I do not find any single line of code of Moving Average.". Then I thought, finally someone see what I'm seeing. Later on you can see that my example is on the same practical strategy that Drishti complaint. 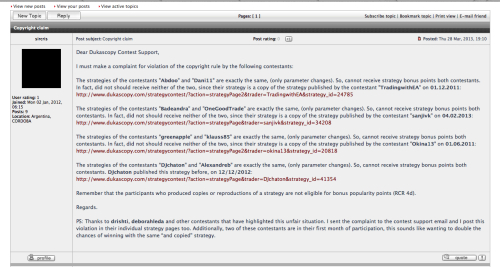 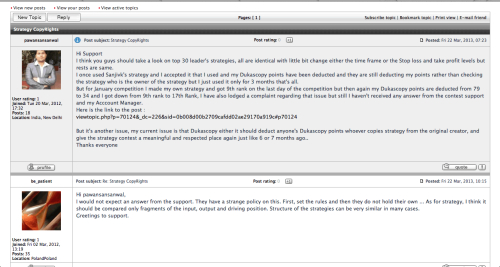 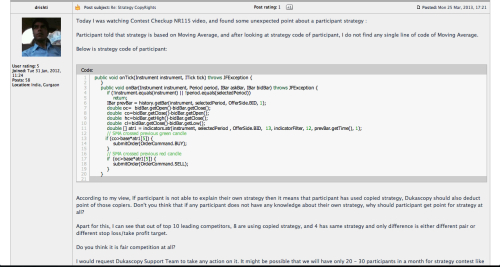 It is clear to everyone that the intention of Dukascopy having various Contests and in particular the Strategy Contest, is not only to create a community and attract new members, but also have someone to serve as a "guinea pig" for testing JForex Platform to eliminate the largest number of possible bugs. So far so good, but we must not forget that the contest has rules and they are there to be met. There is a fundamental rule that throws all Dukascopy credibility for land as a judge of the competition. It's a simple rule, broken by all who copied the same strategie for months and did not realize anything about programming. This strategy does not comply with this rule, but it is the strategy that has given more win prizes to competitors that copied it and used it.
The rule to which I refer is in the Trading Rules with the number 7:
But as this strategy has many problems also leads us to the Programming Rules, point D:
Finally, the 3rd broken rule is the "Copyright", but here Dukascopy placed the weight of the decision to the contestants, so that they denounce any whistleblowers.
Finally I will go to practical examples that made me write this article. As I said at the beginning, in last month there have been complaints again regarding compliance with the rules, essentially the rule of "Copyright". As you saw in the pictures above, taken from the DFC Forum, complaints fall down basically on the TOP10. But, will these complaints foundation according to the rules? As for "Copyright", we have seen that participants who copy strategies will only be punished if someone report it. Here I leave the consideration of the participants actions they should take, but warn that the results can be quite negative. Instead of having a community of members who help develop new and better strategies we have a community of members who begins to hate because denounce each other. Therefore this rule does not testify in any healthy relationship of the members of the DFC.
So what has happened and why there is so disgruntled members with the winners of the last months of the Strategy Contest?
Quite simply, there is a particular strategy that has been copied and used by several members, I call it the [ATR] strategy. When the "Copyright" of this strategy is not denounced, the participant that uses [ATR] is usually in the TOP10 and have received their prize. But the problem of [ATR] is not only the "Copyright". Here yes, I think Dukascopy could have done more to control potential whistleblowers who use this strategy.
Let me give you a practical example as a case very recent. But for those who want to see how many contestants have used this strategy and won, can browse in the Strategy Contest TOP10 for the last 9 months.
The winner of February 2012, Chainsaw used the strategy "chainsaw012013", here called [ATR]. Since no one reported the "Copyright", Dukascopy did not punished this participant, but the strategy should have been disqualified because it did not comply with rules I mentioned above. 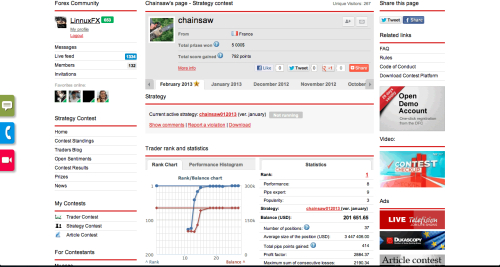 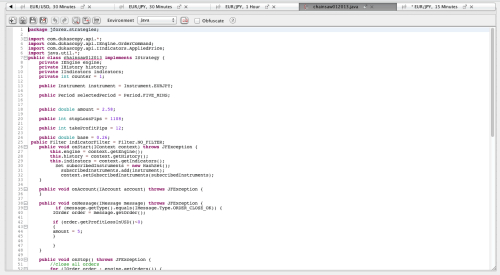 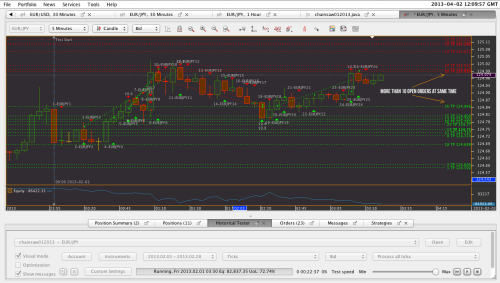 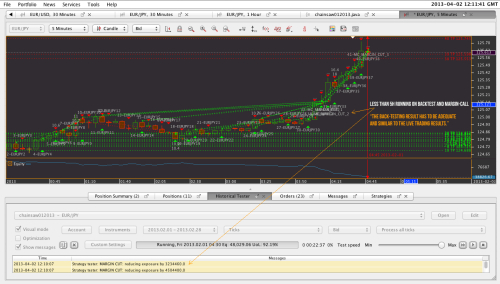 I think that with these 6 images I could explain why we have so many complaints about the strategies used in this competition and [ATR] in particular. As I mentioned this strategy has been awarded numerous times. So I agree with the part where nobody has denounced it by "Copyright", but then, where is the fulfillment of the other rules?
FINAL WORDS:
If we analyze the strategies developed in this 3 years, how many are really profitable? How many strategies have consistent profits? Some of these strategies could be used in Real Account?
The answer is simple - NO!
So, what's really good to be generated in this Strategy Contest? If after 3 years there is no strategy that is distinguished by its consistency, something goes wrong...
I think we should all think about it and use the contest to do something useful and not as a way to earn some money to have a real trading account. If we can do it from 2 ways, better.
LM
Translate to English Show original Toggle Dropdown