Community
Concurso de Artigos
The next Stock Market Crash – China or U.s
The media is going ‘crazy’ over the Chinese stock market shaving off trillions in a couple of weeks. The Chinese government meddling in the markets to save it is being compared to burning a ‘holy book’ - in that it shouldn’t have done it.

What were those communists thinking? No one ever intervenes in a free market, not even the president of the land of the free in 2008 on an interview with CNN. (Irony Intended)

Here is a video.

Listen carefully for the following: 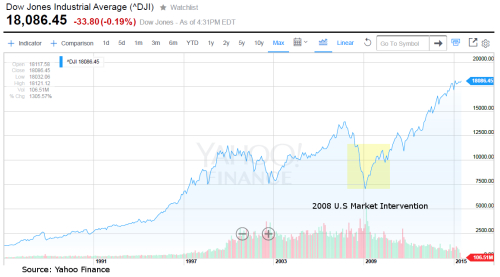 From the above it is clear China is simply replicating what the United States did to its stock market. 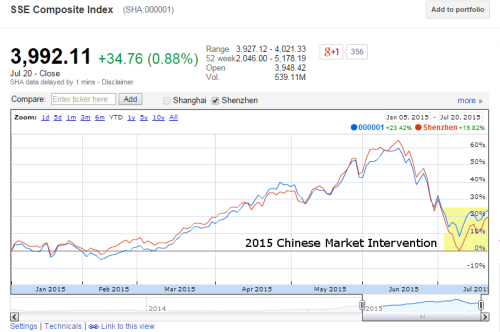 The Shanghai and Shenzhen exchanges are not of great interest to me. My real interest lies in the dinosaurs that lived through the 1929 stock market crash. These dinosaurs are doing great right now! Or are they?

While history repeats itself, only a few are attuned to signs of it repeating itself – the rest of us live in the moment and trust what our governments tell us.

I am not much of an economist, so I keep it very simple. One thing I always look at when evaluating stocks is the dividend payout. If I find a stock that is highly priced, but with a low dividend payout, I conclude that it is overvalued unless I have more information as to why. I acknowledge that capital gains are preferable to dividends since they are taxed ‘better’ but what would happen should the U.S government choose to close this loophole?

Unless the lower yields are explained by high growth rates or ‘promise’ of higher dividends in the future such as in the case of Amazon Inc. rolling profits into Amazon Web Services, Kindle and Fire Phone, then long term results will not be favorable and buying such a stock is more risky.

Chart showing 100-year Dow performance with grey bars indicating economic recessions. When do you think the next recession is due? 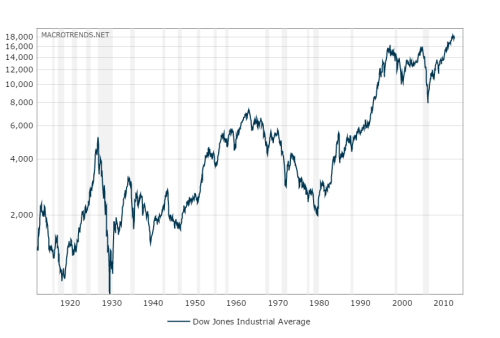 Since 2012, it’s clear that while the markets are shooting up, the volumes are shrinking. Just as with forex markets, a bull run coupled with falling volumes is indicative of a bear market rally. The slight increase in new volumes in 2015 combined with the Dow moving sideways could signal more than just a correction in a bull market. In the period preceding 2008, volumes were consistent as the price kept moving up, but after 2008, it seems to be the opposite. There is a higher than normal spike after the Economic Stimulus Act of 2008, which could imply that the growth witnessed in the market is more artificial than natural and the economy as whole is not in real recovery, but some form of pseudo recovery. This explains the divergence between stock markets in the United States.

For those who can recall May 20th, 2015, the Dow Jones Transports (DJT) closed at a 6-month low while the S&P 500 posted a new all-time daily high. These types of divergences in an economy should be taken into account as indicators of what is in the future. Besides the case on May 20th, it is evident that the gap between the two indices has been increasing since 2013. 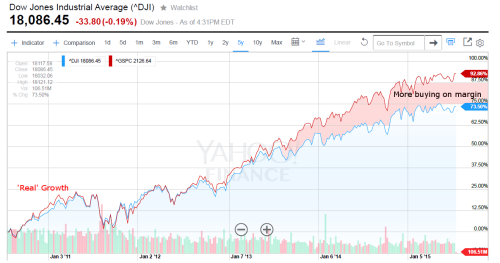 The above is as a result of margin debt, which is always in correlation with the market level. Simply put, high prices = more buying & more buying on margin = higher prices. This cycle continues until it hits a dead stop.

Questions an Investor Has To Answer

At this point, an investor has to answer:-
When Is The Next Market Crash?

The margin debt is also at the highest levels and as opposed to using this as an indicator that something is wrong, more investors believe this should be seen as a positive indicator for more borrowing and buying. This is also evident in China where investors were able to borrow money and buy stocks using the stocks as collateral.

As with what the model is today, the next bubble bust will be accompanied by more money being availed by governments and the same used to buy more stocks and the cycle goes on. 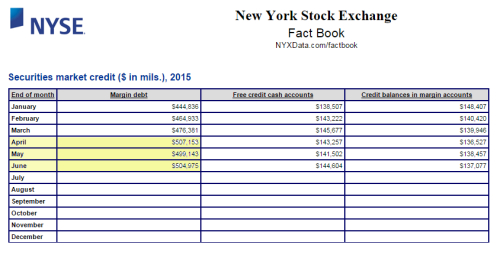 Institutional and professional traders trade on margins waiting for regular investors who trade their real money to get into the market driving prices higher before the first two take their profits. My view on when is the next stock market crash is, we are already living in it, but we are in denial.

At a point in future, the world will have to come into terms that we are running unsustainable economic models, and a total overhaul is required. What the cost of such a shift in global economics is anyone’s guess.
Traduzir para Inglês Mostrar original Toggle Dropdown