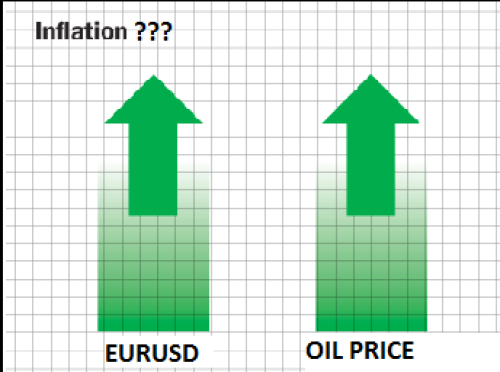 The 5th of June 2014 European Central Bank (ECB) governing council meeting made the following monetary policy resolutions:
As highlighted in the article All Eyes on the 5 June European Central Bank Meeting, these measures are meant to address the low inflation and economic growth problems being faced by the euro area.

The question and answer segment of the press conference provided some interesting views. In response to the question on the strength of the Euro and the possibility of seeing the euro fall back to the initial level against the dollar at 1.17 the ECB president Mario Draghi had this to say, “the exchange rate is not a policy target, but it's very important for price stability and growth.” He also went further saying, “First, the first half of the last three years, it was mostly the declines in the price of oil and food and perhaps some other commodities that have accounted for something like 75%, 80% of the difference between inflation then and inflation now. Then, in the last year, it was the prices in dollar terms haven't moved much; it was the exchange rate that has accounted for the decline in inflation.”

The objective of this article is to investigate the extent to which the exchange rate and crude oil prices influence the inflation rate in the euro area using multiple linear regression analysis.

The equation used will be in the form

Where:
INFLATIONX is the year on year inflation figure for month x.
a is a constant
EURUSDX is the EURUSD exchange rate in month x
O ILX is the Brent crude oil 1-month Forward - fob (free on board) per barrel in Euro for month x
e is a random error term
b1 and b2 are regression coefficients

Monthly data will be used in the analysis starting from January 1999 to April 2014. All data is obtained from the Eurostat and ECB. 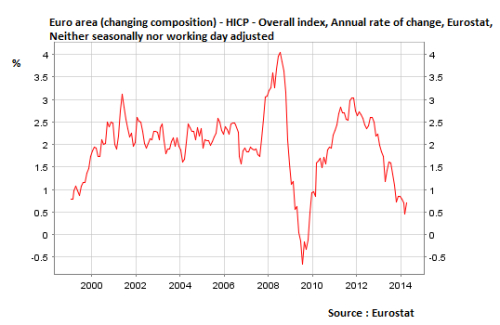 EURUSD
The EURUSD exchange rate used is the average of observations through monthly period. Fig 2 shows the graph for the observed data. 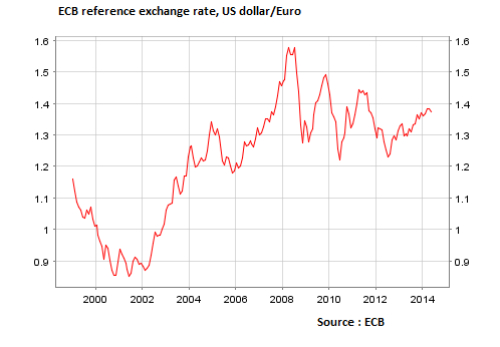 Oil
The Oil prices used are the Brent crude oil 1-month Forward - fob (free on board) per barrel, average of observations through period in Euro, provided by ECB as shown in Fig 3 below. 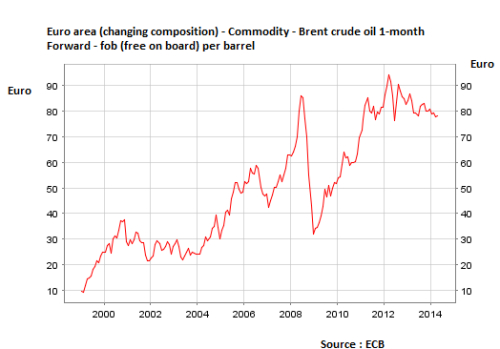 The following assumptions were made in the research
RESULTS AND ANALYSIS

Microsoft excel was used in the regression analysis. Fig 4 shows the results of the analysis.

EURUSD
The coefficient of the EURUSD is - 1.36875465. This means that there is an inverse relationship between the EURUSD exchange rate and inflation. The exchange rate affects inflation in a number of ways:OIL
The regression coefficient for oil is 0.01517399 which is a positive relationship between the oil prices and inflation. The reason is that oil is a major input in the economy. It is used in critical activities such as fueling transportation and heating homes and as such if input costs rise, so should the cost of end products.

Oil prices and the exchange rate are not the only variables that influence inflation in the euro area. There is scope to include in the model other variables such as housing statistics, food prices, unemployment rate and industrial production output data as they all impact inflation directly or indirectly.

In its fight against inflation the ECB should also ensure that the EURUSD does not become a hindrance in achieving their inflation target of close to 2%. Though the exchange rate is not a policy target now, if inflation remains low or continues to slow down then the ECB may be tempted to review its policy. Switzerland already has a policy on the exchange rate, whereby the value of the EURCHF has a floor of 1.2000. With the interest rate already at 0.15% the market can expect further rate cuts and possibly quantitative easing in future as the ECB tries to combat low inflation in the region.
Translate to English Show original Toggle Dropdown