عمومی
مسابقه مقاله
The Impact of Elections on Financial Markets and us Election 2016
The president elections in US impacted financial markets since the beginning of the election process. Dollar, gold and stocks volatility rose above the normal. Mexican pesos saw 2% growth. Gold dropped that much. And one week till the elections things got dramatic. Dollar index fall 1. 42%, S&P 500 saw 1.94% drop, in contrary gold started to rise and became 2.38% more expensive. Economists try to explain and predict market move. Let’s first look into general information.

This is because of the possibility of elections to change economic situation. New president can cause legislative or policy change that can cause prosperity in one sphere and decline in another, or may open new possibilities. Investors also can behave because of political loyalty or rivalry.

Historical data shows that financial markets rally during elections in US. Market performs better when incumbent participates in election. Also market behaves differently depending on which party is winning as stock historical performed better during democrats ruling. During democrats stocks gives 7.9% return but it is just 3% for republicans.

If we will take S&P 500 index as a sample we see that it fell 2.8% in average when incumbent does not take part in elections. Also we see that index gives 55.3% return during democrats and only 23.4% during republicans. 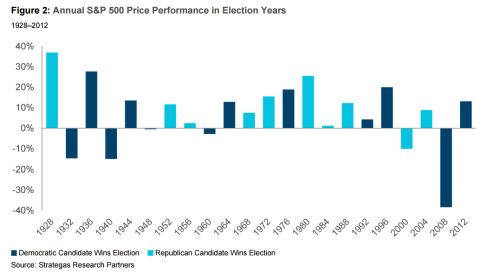 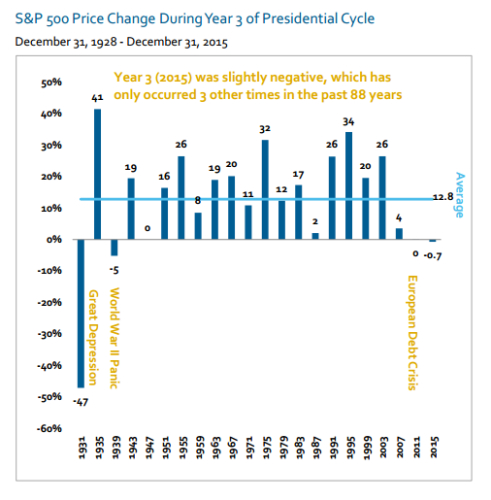 This information shows that market favors Hillary Clinton. She is from Democratic Party and she is seen as a continuation of incumbent policy.

What do candidates offer?


• Increase taxes for those making over $5 Million

• Simplify tax brackets and reduce taxes across the board


Donald Trump has more radical offers that bring uncertainty to the market. His tax plan would cut taxes by $11.98 trillion over the course of a decade, lead to growth in the GDP, higher wages and larger capital stock as well as 5.3 million jobs. However, it would also reduce tax revenues by $10.14 trillion and dramatically increase the deficit and budget debt.
Immigration remains a major pillar of his campaign. Economist thinks in case Trump will succeeds in his plans related to immigrants the industries that depend on immigrant labor would suffer. Farm incomes will drop food prices will raise. It will leading to decreased revenues for local businesses and a loss of American jobs.
Market’s negative reaction to Donald Trump’s rating shows that market is not happy with him to become president. His rhetoric about Muslim immigrants, Muslim citizens of us, immigrants, relations with Mexico and China accepted as a break of stability and reason for uncertainty. Which is why market buys stocks and dollar when chances of Hillary Clinton rises and sells when Donald Trump’s rates rise.
ترجمه به انگلیسی نمایش اصل Toggle Dropdown