Community
Article contest
The GBP/USD & the EUR/USD through Political Change
In the past couple of years, political developments have been important drivers of currency prices. The pound dropped like a bound and chained mafia victim against the dollar when the BREXIT vote materialized on June 23 2016—a vote which meant that the UK would have to cut its current ties with the EU at some point into the future. 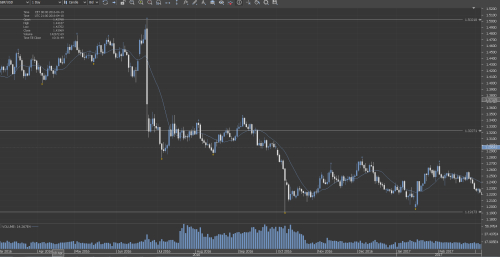 In the meantime the EUR/USD has been going up whenever US President Trump fails at to pass a bill or manages to pass it but a whole lot of people find themselves tangled at the side of the building, feet up as a result. In this case, we are referring to the Healthcare bill. That is in early 2017. On the day President Trump got elected, the EUR/USD experienced a significant drop, similar with the one after the BREXIT vote.

Then there’s the French Presidential elections conundrum. The EUR/USD gapped up by 200 pips after the elections round Sunday on April 23, which resulted in Macron and Le Pen candidates moving on to the final round. The pair found support at above 1.08, without ever closing the gap, and even reached 1.10. All of this, while the FED sounded hawkish in its statement and US data kept coming back strong.

Chart: On April 23 2017, the EUR/USD gapped up after the French elections second round result.

Despite the pair being in an upward channel, a correction is more than due. The last round of the French elections on May 7 pushed the pair to a new high of 1.1021 after Macron was seen as the clear winner, only 10 pips higher than the aft Friday close of 1.1011 and drifted lower after that, trading during mid-European session about 50 pips lower.

Chart: Political events and price action in the EUR/USD. 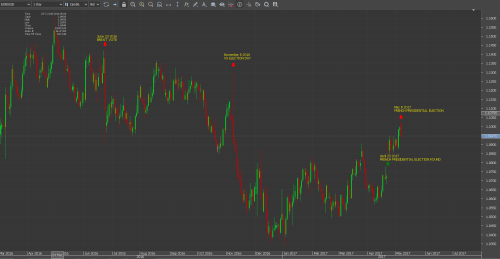 Of course, the French elections result was of crucial importance. No matter how many encouraging data keep coming from Europe or how optimistic the ECB is on the whole, a Le Pen win—a candidate who has argued about the merits of France not using the Euro as its currency at some point—would put the EUR/USD into a nosedive. Whether the odds of such a win were good or not did not matter as much in terms of currency price action until the vote materialized.

However, not all political developments are created equal and some of the ramifications for the future of the global economy or for individual currencies are so complicated that cannot be analyzed in full or with enough precision.

In April, the announcement of a snap election in Great Britain alone caused a 200-pip rally in the GBP/USD in a matter of minutes. BREXIT is irreversible but a lot of political figures are still hoping and elections bring false hope, even if for some, the choice of elections is simply an internal politics game.

In any case, despite the similarities of the elections in both Britain and France and the EUR/USD and GBP/USD currency up and downs, the two are hinting at different problems, each with complex consequences that are hard to predict.

First, the UK leaving the EU is mostly about trade. How much will the EU and the UK are going to be affected by this and not so much about the dissolution of the EU. On the other hand, the French elections was exactly about that, the beginning of the end.