What is the Federal reserves plan? What is Janet Yellen thinking?

Ultimately, none of us know... We can try and predict, guess. But at the end of the day she will do what she does and we will have to react. This being said, it doesn't mean we can't have a game plan, and expect certain things. 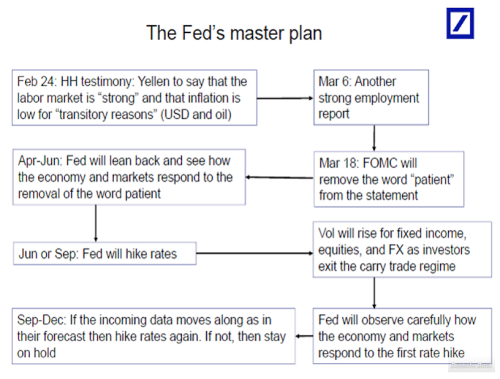 This chart is from DBs Slok, and shows an expected route for the Fed.

Thus far, the March 6th print was strong, with Non-Farm payroll change coming in at 295k and last week we saw the word "patient" removed.

What was expected was that with "patient" removed, we should see a hike in the coming few months, and with Yellen also saying it won't be the April meeting, then we could only assume the June meeting.

Well we saw this, however it was far from the hawkish tone we were expecting, and subsequently we saw quite the move in the USD and US interest rates.

The dollar dropped an incredible 5% in just minutes.

On top of this, US 2 year yields dropped a huge 14bps

Now looking forward as per Deutsche, they expect the Fed to sit back and monitor the financial markets and data points to see whether or not there will be any irrational fears going into the 1st Hike. No so far there has been some volatility across markets but nothing major as of yet. So this leads us to look at current global data, looking at Economic surprise indexes for the US and Europe we can see quite the divergence.

This major flip is somewhat ironic. Towards the end of last year when we saw the red line (europe) very negative, and the US (white) strongly positive, there was talk of the Fed holding back due to weakening international economies, yet it seems the slowdown is coming in the US whilst everywhere else is picking up!

Given the cyclicality in data shown we may see the US data to stabilize going into the june/sept period which DB highlight as the time expected for a rate hike. However, the markets currently only see one hike by December.

The current terminal rate proxied by the US yield curve is exactly 2.5% as we can see from the 5y5yf chart below

This is off critical importance as we therefore note that the market only expects 9 25bps hikes over the course of the coming years. This subsequent impact on volatility, which we've started to see already, will be partially the most important change in the markets going through the latter half of 2015. With global fx vol currently sat at "taper tantrum" levels, further upside is entering extreme territory, but we've started to see some of the impacts, with this last week seeing a 24hr period with an 8-handle move in EURUSD - in a word: Ridiculous.

What's important from here, and after the 1st hike is how the markets, and the economic data reacts. We've seen how thus far the US data has slowed remarkably most likely from the rapid rise in the USD - and we could see a continuation of this if us hikes leading to a higher USD.

Given this vicious cycle it's hard to see this USD move to be a huge multi-decade move like we;ve seen in the past. Thus we can only expect so much upside in the USD, and 100 on the DXY
Translate to English Show original Toggle Dropdown