In this article I’d like to expond on the big shadow candle trade, which is part of the general price action strategy. Price action trades on candles alone because that is where the action is, hence the name. In price action we do not look at indicators (MACD’s, RSI’s, stochs and the whole lot) as these indicators, in my opinion, can trick you into losing trades.

To put it simply, these indicators lag. I’m interested in what will happen in the next 1 hour and not what happened last hour or yesterday. The price action strategy, which is based on candlesticks, like a magic ball, can show us how the price might, in its highest probability, behave in the near future.

I have been using this strategy (amongst others) for some time now with good returns. Below I will show you how I used this strategy on the USD/CAD pair and made 570 pips in the first 2 weeks of December 2015. We have all heard this phrase before on the internet: “Are you tired of all these indicators clogging up your chart, where at times you cannot see the actual price or what in fact is going on?” I’m not trying to sell this strategy to you, but would like you to look at the following chart just to see how readable it is. 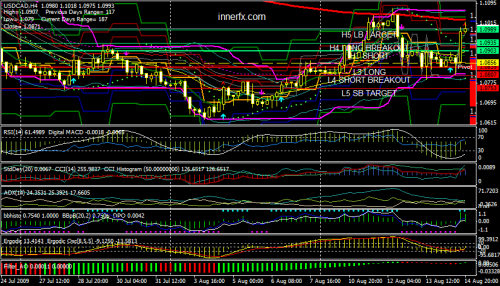 Some people think that if something is complicated like the chart above, then it must be better than something simple like a chart with "naked" candlesticks only. They think that it gives them an edge over the market because they are so sophisticated. They are wrong. I believe that Einstein once said that the genius lies in simplicity, and I would take his word for it.

The big shadow trade strategy is simple. The rules are:
All of the above first 3 rules have to be met in order to enter a trade. If one is not met you should disregard the trade as you might be tricked into a standard candle engulfing trade, which at times can be a false signal. The big shadow candle trade simply has more substance to it, hence giving a higher probability of a successful trade. Now let’s look at the 2 live trades I took and analyze them.

Below are 2 live trades on USD/CAD placed on the hourly chart.

The above chart might not be too readable, so let’s analyze the big shadow trade step by step.

As you can see, I entered the long trade on the candle where the green arrow is. The previous candle was a big shadow engulfing. Notice that the “box” measured from the low of this candle is not met by price till the previous 23rd candle! This is a sign of exhaustion in price action. I placed a buy entry a few pips above this candle and a stop loss below the strong support of 1.3300.

At times it does happen that the price will try to retest the lows of the big shadow bullish candle and even go a few pips below as was the case here! At this point I will not go into this topic as it is a subject for a new article explaining why retail traders get washed out of the market before a big counter move takes place. Sometimes the best thing to do is to place your stop loss and move away from the screen, maybe go to the gym, restaurant, movies, whatever. You cannot be tight with your stop loss in this strategy, as you should have at least 30 pips below the low of the big shadow bearish candle.

The next day the pair was going up nicely and I started moving the stop loss up to beneath the swing lows. Now, the question looms in every trader’s head: where do we exit this trade that is already in nice profit? The take profit does not have to be a strict big shadow candle, it can just be a simple engulfing candle, which in this case occurred after 2 massive bullish candles. I exited the trade on the close of this engulfing candle and booked 192 pips.

I then stayed out of the market as it went choppy and sideways, as illustrated at the beginning of the chart below:

When trading the “loonie” (slang for CAD) you have to take into consideration the price of oil. On the 10th of December it looked to me like it wants to go lower. So, I spotted my next big shadow trade at the candle where the green arrow is above. The problem was that there was a wick going through my “box” on the second previous candle, but this time, and luckily, I disregarded that “box” rule due to the fact that the price of oil was getting “heavy”.

As a result, I placed a buy entry above the big shadow candle, stop loss 20 pips below (which actually almost got hit and I was lucky there, since I should have placed it at least 30 pips lower) and the slide in oil and loonie continued like clockwork.

And now, the question that bugs every trader – where do I take profits from this great ride? I had my doubts whether to exit at the red candle marked with the question mark. However, it didn’t have a higher high to the previous bullish candle, it was somewhat engulfing, but I considered it to be a shakeout of longs due to the VSA analysis I made on it. Next, the price got choppy, and afterwards slowly started trending upwards. What I was looking for was exhaustion in the price action. The bullish candle (where the green arrow is) certainly looked like exhaustion. Then I looked for some possible bearish candles. I then took a profit of 375 pips on the close of the third red candle.

That’s all there is to this strategy! It is simple and at the same time can yield good profits. The big shadow trade strategy has more rules for an entry as compared to the standard engulfing candle strategy, therefore making the entries with a much higher probability of closing a profitable trade. The big shadow trade strategy and the standard engulfing candle strategy are part of the overall price action strategy, and as the name itself, price action helps the trader to anticipate the future instead of bothering about most of the indicators which are out there, which simply lag.
Translate to English Show original Toggle Dropdown