عمومی
مسابقه مقاله
The Best Indicators and how to Use them in Forex
Double Bollinger Band, MACD, Stochastic Crossover Forex Strategy For any forex trader actively trading the markets, it’s always critical to know what the ongoing trend is, and at least equally so important (if not more) is whether or not a trend exists at all or not at a particular time.
​
This strategy is designed to give all of this precise information based on which any trader can make a better, more informed and more profitable trading decision. We are going to use three popular technical indicators to trade this system:
​However, we are going to use them in a special kind of way. Essentially in a way where each of them confirms the signal from the other indicators and therefore hugely stacking the probabilities in our favor.

Of course, as always we can add support and resistance to further enhance the system.

Specifically for this strategy, the parameters used for the indicators are as follows:
The deviation of one Bollinger Band (BB) is 2 while for the other is 1. In our examples here on the charts, the black BB is with the standard deviation of 2 while the blue BB is with the standard deviation of 1. Entry rules: It’s also wise that before triggering the entry you switch and look at the lower timeframes to try and pinpoint a better entry price. Often times Price Action patterns on lower timeframes will give a chance for a better entry.
​
In the following example on USDCAD, a same time crossover signaled the start of a nice uptrend that yielded almost 200 pips with this strategy. 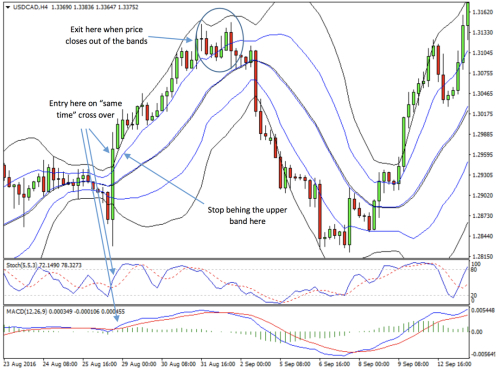 An example of a "same time" cross on all 3 indicators Stop-Loss Placement:
In this USDJPY example, the Stochastic and the MACD started to turn before the price closed outside of the band. This is a common occurrence and helps to confirm that the trend is near exhaustion. An example of a short entry and exit on USDJPY 4h chart Managing the Opened Trade, Trailing the Stop-Loss:
​For example, if it appears at a support or resistance level then it should be looked at carefully as a reversal is much more likely. On the other hand, if there is no support, resistance or other obstacles then it can be false and not much significant. The ongoing trend will probably continue. 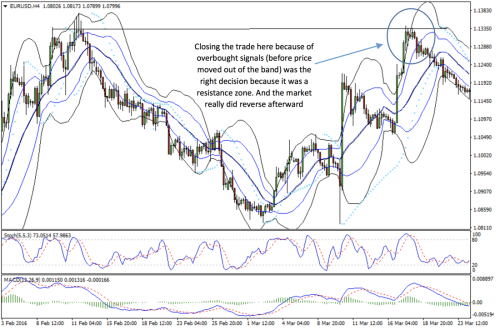 Combining resistance with this strategy – EURUSD 4h chart Use these indicators for successful trades but do not rely to them 100%. Read news articles that i normally get directly from Jforex 3, dukascopy platform. I really hope that this article will revamp your trades to success.
ترجمه به انگلیسی نمایش اصل Toggle Dropdown