Community
Article contest
The Averaging Principle Used in Building Eas
This article in turn tells us about averaging as the main principle for an expert advisor’s algorithm. Along with strategies based on indicators only, this type of programs also uses them to find the most suitable moments to open and close trades. “What is ‘averaging’?” – people new to Forex would ask. Firstly, if you look at the price chart, you'll see that if it goes upward, it still comes down later at the least to 61.8% of the initial value and vice versa. This regularity of the price is known as correction and occurs periodically; however, the price often returns to 38.2% or even lesser range of the initial value. If you want to learn more about correction, just consult the Fibonacci levels on Forex. Secondly, we can make a profit out of it.

What trader doesn't know about correction is how far the price goes each time, till it starts its reverse movement. So traders invented such an interesting method as averaging, which means opening several trades before the correcting movement begins. As a result, we almost always have profit exceeding loss. But if there is a trend that implies the absence of correction, we have several losing trades opened. So, in this case possible solutions would be: continue to open trades on the same side, begin to open trades on the opposite side expecting that the trend lasts longer, open one opposite hedging trade expecting that the price returns in some time, start to open trades on both sides hoping to close them all in profit.

There is also one interesting point: we can open trades with fixed lot or with increasing lot, which means enabling the martingale option. In the second case, we compromise to the higher extent. Opening market orders over equal intervals distinguishes the grid strategy. Opening them according to indicators looks more reasonable; however, each of these cases has its strong and weak points. We can find a more opportune moment for opening, using indicators, but sometimes the price moves too quickly, so the grid strategy wins in accuracy. This quality of an averaging expert means a lot, as the price correcting movement can be very slight to get profit.

This review examines two expert advisors. The first one uses averaging, but doesn't have the martingale option enabled. It works by limit orders, placing them on both sides of the price and adding other orders subsequently. The diagram shows its performance on the GBPUSD M15 data test. 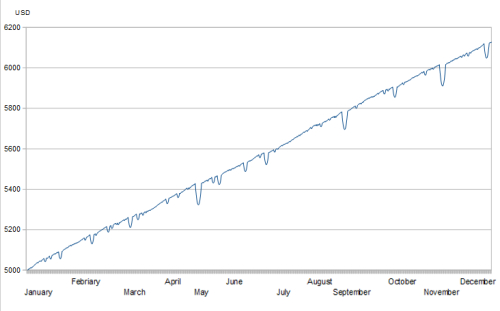 We had a starting balance of 5,000 USD, and have been permanently increasing it to 6,167.32 USD in the course of a year that makes 18,93% of annual profit. The drawdown came to 7.94%; 64.53% of profit trades were accomplished, while the program made 11 consecutive losses. This program’s risk adjustment used fixed lot set, so the income is not that big; it was done intentionally to avoid drawdown. The curve is quite nice, so this type of strategy will suit some traders who don't like to run risks.

The second strategy was written by me in 2013. It works on the M1 chart and uses the Awesome Oscillator to open positions and the Commodity Channel Index – to close them. So, when the AO draws three candles, the middle one of which is protruding – it opens a position and closes it, when the CCI candles draw the same pattern. The program shows an interesting diagram of the growing balance resembling a rose stem. 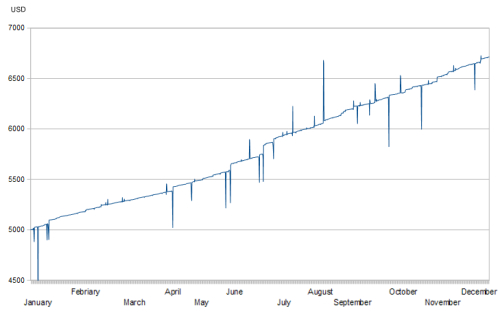 It happens, as it opens opposite orders in case of a starting trend, so its algorithm is based on the pyramids principle. It also has the tough martingale option enabled, so the initial lot increased 96 times. The program shows the quite remarkable 83.01% of profit trades, 34.3% of annual income, 4 consecutive losses and 28.9% drawdown. It is also stable enough to overcome the price’s trend movements and, to my opinion, has only one weak point, which is too high lot increment. However, the good results compensate it.

Honestly, averaging experts are very popular among novice traders in particular. They are attractive because of their smooth rising line of balance, which lacks noticeable drawdowns, and their work creates an impression of stability. However, this impression could be very delusive, because the trend line often prevents closing open trades in profit. Many traders lost all their deposits due to the trend and opening of contrary positions with increasing lot. So experts with averaging without appropriate handling could be very dangerous. To define the possible risks, a trader should perform proper testing and optimization. If you want to enable the martingale option, the crucial parameter for testing would be consecutive losses. Taking into consideration the possible augmentation of consecutive losing trades, a safety factor should be taken into account to see the general risk. The right thing to do would be downloading the quote history of several previous years and testing to determine your program’s capabilities.

On the whole, averaging experts show moderate level of profitability compared to the same level which investors can get in a bank. But they have quite a smooth rising line of balance on charts, which makes them attractive to traders.
Translate to English Show original Toggle Dropdown